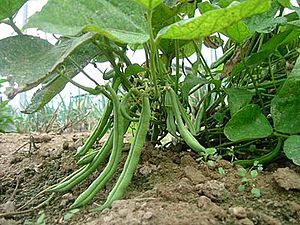 Green common beans on the plant 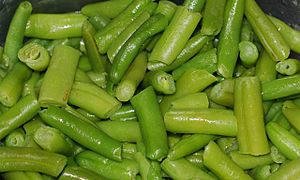 Green beans, also known as string beans, or snap beans in the northeastern and western United States, are the unripe fruit and protective pods of various cultivars of the common bean (Phaseolus vulgaris).[1][2]

They are distinguished from the many differing varieties of beans primarily grown for their dried seeds in that green beans are harvested and consumed with their enclosing pods, typically before the seeds inside have fully matured. This practice is analogous to the harvesting of unripened snow pea pods or sugar snap peas of the pea family of plants. Popular green bean cultivars have been selected especially for the fleshiness, flavor, or sweetness of their pods.

Haricots verts, French for "green beans" (also known as French beans, French green beans, French filet beans, or fine beans (British English)) is a variety of green beans that is longer, thinner, crisper, and more tender than "standard" green beans.[citation needed] It is different from the haricot bean, which is sold as a dried seed.

Green beans are eaten around the world, and are marketed canned, frozen, and fresh. Green beans are often steamed, boiled, stir-fried, or baked in casseroles. A dish with green beans popular throughout the United States, particularly at Thanksgiving, is green bean casserole, which consists of green beans, cream of mushroom soup, and French fried onions.[3]

Many but not all bean pods contain a "string", a hard fibrous strand running the length of the pod. This is often removed before cooking, or may be made edible by cutting the pod into short segments. The first "stringless" bean was bred in 1894 by Calvin Keeney, called the "father of the stringless bean", while working in Le Roy, New York.[4]

The flavonol miquelianin (Quercetin 3-O-glucuronide) can be found in green beans.[5]

Bush beans are short plants, growing to approximately 2 feet (61 cm) in height, without requiring supports. They generally reach maturity and produce all of their fruit in a relatively short period of time, then cease to produce. Gardeners may grow more than one crop of bush beans in a season.

Pole beans have a climbing habit and produce a twisting vine, which must be supported by trellises, cages, or other means.. Runner beans have a similar habit but are a different species of bean.

Over 130 varieties of green bean are known.[7] Varieties specialized for use as green beans, selected for the succulence and flavor of their pods, are the ones usually grown in the home vegetable garden, and many varieties exist. Pod color can be green, purple, red, or streaked. Shapes range from thin "fillet" types to wide "romano" types and more common types in between.

The following varieties are among the most common and widely grown in the US. Closely related varieties are listed on the same line.

According to UN Food and Agriculture Organization (FAOSTAT), the top producers of green beans (in metric tonnes) in 2012.[8]