The station is located on Northwest 21st Street near North Douglas Road (West 37th Avenue), just east of Le Jeune Road (West 42nd Avenue) and Miami International Airport (MIA), and south of the Miami River and the Airport Expressway (SR 112). When fully in service, it will serve Amtrak, Tri-Rail, Metrorail, and Metrobus, and will provide a people mover connection to the airport via the MIA Mover.

Prior to Current Station

In the 1970s, Amtrak trains used to pass nearby this site just on the north side of the Miami River on their way to their southern terminus of Allapattah Terminal at 2210 NW 7th Avenue.[8] In 1977, Amtrak determined it could not maintain the decaying Allapattah Terminal, which also posed logistical problems for passenger coach maintenance, and moved the Miami terminus to its current location at the Seaboard passenger coach yards near Hialeah, north of Miami Airport Station.[9] The new Miami Central Station is located six miles south of the current Amtrak station, on a mile-long spur that branches south off of the beginning of the Seaboard (now CSX) Homestead extension near the Miami River.

Southbound Tri-Rail service terminated at the modern-day Hialeah Market in 1989. A new station opened in April 1998 at the present site of Central Station. It was the southern terminus of the Tri-Rail system until September 12, 2011, when Tri-Rail service to the site was suspended for approximately three years to facilitate construction of the new station. Hialeah Market became the temporary southern terminus for Tri-Rail with shuttle buses taking passengers between the Hialeah Market station and Miami International Airport and two trains per day stopping further north at the Metrorail transfer station with accompanying shuttle buses.[10] 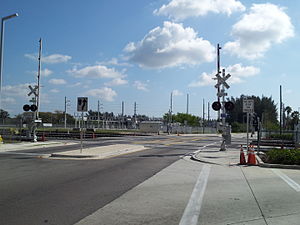 Since the platforms were deemed too short for Amtrak trains, NW 25th Street will close for about 45 mins several times per day once Amtrak service begins.

The United States Department of Transportation designated the Miami Intermodal Center as a "Project of National Significance," earning it special loan rates. The first of these loans was made in 2000 for $269 million. Another loan of $270 million was approved in 2007.

The first component of the MIC Program to be completed was major roadway improvements, including a reconfigured Le Jeune Road, in May 2008. The Roadways Program was developed to provide direct, enhanced connections to and from nearby expressways and the local roads serving the MIC and airport. The second component was the Rental Car Center (RCC), a 3,400,000-square-foot (320,000 m2) "rental car shopping mall" that provides customers arriving through Miami International Airport (MIA) convenient access to participating rental car companies. The MIA Mover APM, a dual-track, light-rail, 1.25-mile elevated people mover system connecting MIA to the RCC and future Miami Central Station, was completed in September 2011.

In the middle of construction, it was realized that the platforms were not long enough to accommodate long Amtrak trains. No significant changes will be made to the platforms, but vehicular traffic on Northwest 25th Street will be stalled for about 45 minutes several times a day when Amtrak trains are at the station. 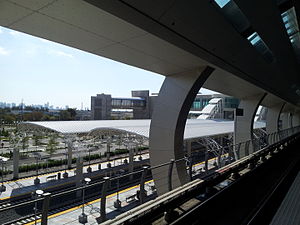 The final component of the program, the Miami Central Station, is Miami-Dade County's first all-inclusive ground transportation hub and is currently under construction. The completed program will cost $2 billion and is expected to serve approximately 150,000 commuters and travelers each day.

Phase I of the station, which involved the construction of the MIA Mover, Metrobus terminal, and Metrorail concourse, opened on July 28, 2012. Phase II, which entails construction of the Tri-Rail and Amtrak concourse, opened on April 5, 2015 for Tri-Rail and is scheduled to open in summer 2016 for Amtrak.[1][2] The intermodal rail station, a part of the greater Miami Intermodal Center at MIA, is expected to be among the busiest passenger stations in Florida and the Southeast upon completion. Construction of the facility began on May 18, 2011, but the ceremonial groundbreaking did not take place until September 27.[11] 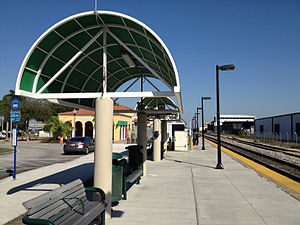 Tri-Rail's original Miami Airport Station closed on September 12, 2011 to facilitate construction of Miami Central Station. The station was closed for a period of approximately four years, during which time it was rebuilt and connected to the airport via an escalator and people mover.

During this four-year period, the southern terminus of rail service was relocated to the Hialeah Market Station, where bus transportation was provided to and from the Miami International Airport through this station. Trailers were installed to house a ticket agent and restroom facilities. Additional lighting was also installed, approximately 60 additional parking spaces were striped and 24-hour security was provided at the station.

By closing the Miami Airport Station, the construction time of the MIC was reduced and resulted in taxpayers saving approximately $10 million in construction costs. The impact to passengers was less than 10 minutes in extended travel time to and from the airport.

The Metrorail and Metrobus stations are combined in a single structure designed by Perez & Perez Architects Planners Inc; a Miami local firm. The stainless steel and aluminum canopy was design through modern digital fabrication techniques and was manufactured by Zahner in Kansas City. The structure was shipped in modular sections and assembled on site in an eight-month time-frame. The new Metrorail and Metrobus station opened July 28, 2012.

The other platforms servicing Amtrak and Tri-Rail were designed by AECOM. Tri-Rail service began in April 2015 and Amtrak service is expected to begin mid-2016. Amtrak service to Miami Central Station was planned to begin when Tri-Rail began serving the station in April 2015. However, during construction, it was discovered that the passenger platforms were designed and built 200' too short to accommodate Amtrak trains. As a result, the Florida Department of Transportation is in the process of extending the platforms, which will drive up the cost of the project an additional $4 million. Amtrak service to Miami Central Station is now scheduled to begin sometime in the summer of 2016.[12]

The Rental Car Center is a multi-level consolidated rental car facility that consolidates the operations of 16 rental car companies in one location. Opened on July 13, 2010, the RCC is home to 6,500 rental cars and is projected to serve 28,000 customers daily. The Quick Turnaround Area where vehicles are washed and refueled includes 120 gas pump positions and 42 car wash bays on three vehicle storage levels. The multi-level fueling system is the first of its kind in the United States.

The consolidation initially cut the combined rental car bus fleet in half from 120 buses to 60. In September 2011, the MIA Mover entirely replaced the shuttle bus service. The elimination of the rental car bus fleet has reduced gas emissions at the airport by 30 percent.[13]

The MIA Mover is an automated people mover (APM) system which transports passengers between Miami International Airport's Main Terminal and the Miami Central Station and Rental Car Center, as part of the Miami Intermodal Center (MIC).[14]

Note: Amtrak service at Miami Central Station service is not expected to begin until the summer of 2016. 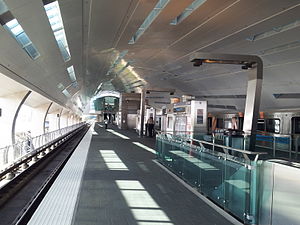 The Metrorail station opened earliest, but is designed for easy transfers between modes

The official name of the Metrorail station at Miami Airport Station is Miami International Airport.[15] 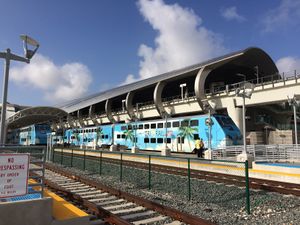 Two Tri-Rail trainsets at the station, 25 days before the opening