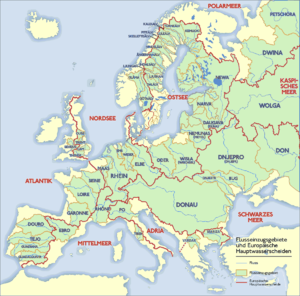 A drainage divide, water divide, divide, ridgeline,[1] watershed, water parting, or (in Canada) height of land[citation needed], is the line that separates neighbouring drainage basins. In hilly country, the divide lies along topographical ridges, and may be in the form of a single range of hills or mountains, known as a dividing range. In flat country—especially where the ground is marshy—the divide may be harder to discern.

A valley floor divide is a low drainage divide that runs across a valley, sometimes created by deposition or stream capture.

Since ridgelines are easy to see and agree about, drainage divides are often natural borders defining political boundaries, as with 18th century North America's Royal Proclamation of 1763 that preceded the American Revolution.

Drainage divides can be grouped in three types:

A divide in which waters on each side flow to different oceans (for example: the Congo-Nile Divide)

Waters on each side of the divide never meet, but do flow into the same ocean (for example: the divide between the Yellow River basin and the Yangtze, or a more subtle example the Schuylkill-Lehigh divide at Pisgah Mountain in Pennsylvania, where two minor creeks divide to flow and grow east and west respectively joining the Lehigh River and Delaware River or the Susquehanna River and Potomac River each tributary complex having separate outlets into the Atlantic.)

Waters part, but eventually rejoin at a river confluence (for example: the Mississippi and Missouri divides)

A valley-floor divide occurs on the bottom of a valley and arises as a result of subsequent depositions, such as scree, in a valley through which a river originally flowed continuously.[2]

Examples include the Kartitsch Saddle in the Gail valley in East Tyrol, which forms the watershed between the Drau and the Gail, and the divides in the Toblacher Feld between Innichen and Toblach in South Tyrol, where the Drau empties into the Black Sea and the Rienz into the Adriatic.

Settlements are often built on valley-floor divides in the Alps. Examples are Eben im Pongau, Kirchberg in Tirol and Waidring.[3] Extremely low divides with heights of less than two metres are found on the North German Plain within the Urstromtäler, for example, between Havel and Finow in the Eberswalde Urstromtal. In marsh deltas such as the Okavango, the largest drainage area on earth, or in large lakes areas, such as the Finnish Lakeland, it is difficult to find a meaningful definition of a watershed. Another case is bifurcation, where the watershed is effectively in the river bed, a wetland or underground. The largest watershed of this type is the bifurcation of the Orinoco in the north of South America, whose main stream empties into the Caribbean, but which also drains into the South Atlantic via the Casiquiare canal and Amazon River.

Drainage divides hinder river navigation. In pre-industrial times, water divides were crossed at portages. Later, canals connected adjoining drainage basins; a key problem in such canals is ensuring a sufficient water supply. Important examples are the Chicago Portage, connecting the Great Lakes and Mississippi by the Chicago Sanitary and Ship Canal, and the Canal des Deux Mers in France, connecting the Atlantic and the Mediterranean.