Charles Kingsley (12 June 1819 – 23 January 1875) was a broad church priest of the Church of England, a university professor, social reformer, historian and novelist. He is particularly associated with Christian socialism, the working men's college, and forming labour cooperatives that failed but led to the working reforms of the progressive era. He was a friend and correspondent with Charles Darwin.[1] He was also the uncle of traveller and scientist Mary Kingsley.[2] 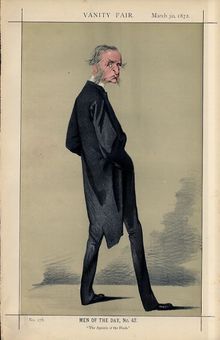 Caricature by Adriano Cecioni published in Vanity Fair in 1872

Kingsley was born in Holne, Devon, the elder of two sons of the Reverend Charles Kingsley and his wife Mary Lucas Kingsley. His brother Henry Kingsley and his sister Charlotte Chanter also became writers. He spent his childhood in Clovelly, Devon, where his father was Curate 1826–1832 and Rector 1832–1836,[3] and at Barnack, Northamptonshire and was educated at Bristol Grammar School and Helston Grammar School[4] before studying at King's College London, and the University of Cambridge. Charles entered Magdalene College, Cambridge, in 1838, and graduated in 1842.[5] He chose to pursue a ministry in the church. From 1844, he was rector of Eversley in Hampshire. In 1859 he was appointed chaplain to Queen Victoria.[6][7] In 1860, he was appointed Regius Professor of Modern History at the University of Cambridge.[6][7] In 1861 he became a private tutor to the Prince of Wales.[6]

In 1869 Kingsley resigned his Cambridge professorship and, from 1870 to 1873, was a canon of Chester Cathedral. While in Chester he founded the Chester Society for Natural Science, Literature and Art, which played an important part in the establishment of the Grosvenor Museum.[8] In 1872 he accepted the Presidency of the Birmingham and Midland Institute and became its 19th President.[9] In 1873 he was made a canon of Westminster Abbey.[6] Kingsley died in 1875 and was buried in St Mary's Churchyard in Eversley.

One of his daughters, Mary St Leger Kingsley, became known as a novelist under the pseudonym "Lucas Malet".[7]

Kingsley's life was written by his widow in 1877, entitled Charles Kingsley, his Letters and Memories of his Life.[7] 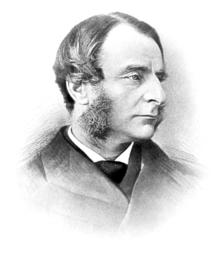 Kingsley's interest in history is shown in several of his writings, including The Heroes (1856), a children's book about Greek mythology, and several historical novels, of which the best known are Hypatia (1853), Hereward the Wake (1865) and Westward Ho! (1855).

He was sympathetic to the idea of evolution and was one of the first to welcome Charles Darwin's book On the Origin of Species. He had been sent an advance review copy and in his response of 18 November 1859 (four days before the book went on sale) stated that he had "long since, from watching the crossing of domesticated animals and plants, learnt to disbelieve the dogma of the permanence of species."[10] Darwin added an edited version of Kingsley's closing remarks to the next edition of his book, stating that "A celebrated author and divine has written to me that 'he has gradually learnt to see that it is just as noble a conception of the Deity to believe that He created a few original forms capable of self-development into other and needful forms, as to believe that He required a fresh act of creation to supply the voids caused by the action of His laws'."[11] When a heated dispute lasting three years developed over human evolution, Kingsley gently satirised the debate, known as the Great Hippocampus Question, as the "Great Hippopotamus Question".

Kingsley's concern for social reform is illustrated in his classic, The Water-Babies, A Fairy Tale for a Land Baby (1863), a tale about a chimney sweep, which retained its popularity well into the 20th century. The story mentions the main protagonists in the scientific debate over human origins, rearranging his earlier satire as the "great hippopotamus test". The book won a Lewis Carroll Shelf Award in 1963. 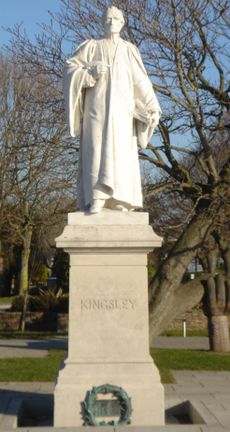 A statue of Charles Kingsley at Bideford, Devon (UK)

His chief power as a novelist lay in his descriptive faculties. The descriptions of South American scenery in Westward Ho!, of the Egyptian desert in Hypatia, of the North Devon scenery in Two Years Ago, are brilliant; and the American scenery is even more vividly and more truthfully described when he had seen it only by the eye of his imagination than in his work At Last, which was written after he had visited the tropics. His sympathy with children taught him how to secure their interests. His version of the old Greek stories entitled The Heroes, and Water-babies and Madam How and Lady Why, in which he deals with popular natural history, take high rank among books for children.[7] Kingsley was influenced by Frederick Denison Maurice, and was close to many Victorian thinkers and writers, including the Scottish writer George MacDonald.

Kingsley was highly critical of Roman Catholicism and his argument, in print, with John Henry Newman, accusing him of untruthfulness and deceit, prompted the latter to write his Apologia Pro Vita Sua.[12] Kingsley was accused of racism towards the Roman Catholic Irish poor[12] and wrote in a letter to his wife from Ireland in 1860, "I am haunted by the human chimpanzees I saw along that hundred miles of horrible country [Ireland]...to see white chimpanzees is dreadful; if they were black one would not see it so much, but their skins, except where tanned by exposure, are as white as ours."[13] Kingsley also wrote poetry and political articles, as well as several volumes of sermons.

Kingsley coined the term pteridomania in his 1855 book Glaucus, or the Wonders of the Shore.[14]

Charles Kingsley's novel Westward Ho! led to the founding of a village by the same name (the only place name in England with an exclamation mark) and inspired the construction of the Bideford, Westward Ho! and Appledore Railway. A hotel in Westward Ho! was named after and opened by him.

A hotel opened in 1897 in Bloomsbury, London, was named after Kingsley. The hotel was founded by teetotallers who admired Kingsley for his political views and his ideas on social reform. It still exists and is now known as The Kingsley by Thistle.[15]

In 1905 the composer Cyril Rootham wrote a musical setting of Kingsley's poem Andromeda: the work was performed at the Bristol Music Festival in 1908. Like Kingsley, Rootham had been educated at Bristol Grammar School.