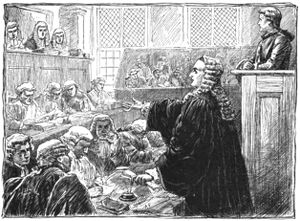 The trial, as imagined by an illustrator in the 1883 book Wall Street in History

John Peter Zenger (October 26, 1697 – July 28, 1746) was a German American printer and journalist in New York City. Zenger printed The New York Weekly Journal.[1] The first generation of American editors discovered readers loved it when they criticized the local governor; the governors discovered they could shut down the newspapers. The most dramatic confrontation came in New York in 1734, where the governor brought Zenger to trial for criminal libel after the publication of satirical attacks. The jury acquitted Zenger, who became the iconic American hero for freedom of the press.[2]

In 1733, Zenger began printing The New York Weekly Journal, in which he voiced opinions critical of the colonial governor, William Cosby.[3] On November 17, 1734, on Cosby's orders, the sheriff arrested Zenger. After a grand jury refused to indict him, the attorney general Richard Bradley charged him with libel in August of 1735.[4]

Zenger's lawyers, Andrew Hamilton and William Smith, Sr., successfully argued that truth is a defense against charges of libel.[5]

John Peter Zenger was born in 1697, the son of Nicolaus Eberhard Zenger and his wife Johanna. No baptismal record is known. His father was a schoolteacher in Impflingen in 1701. The Zenger family had other children baptised in Rumbach in 1695 and in 1703[6] and in Waldfischbach in 1706.[7] The Zenger family immigrated to New York in 1710 as part of a large group of German Palatines, and Nicolaus Zenger was one of those who died before settlement.[8] John Peter was bound for eight years as an apprentice to printer William Bradford of New York, where he learned his trade. By 1720, he was taking on printing work in Maryland, though he returned to New York permanently by 1722.[9] After a brief partnership with Bradford in 1725, Zenger set up as a commercial printer on Smith Street in Manhattan.[10]

Zenger married twice, to Mary White in 1719 at Philadelphia, and as a widower in 1722 to Anna Catharina Maul in New York. He was the father of six children by his 2nd wife.[11] 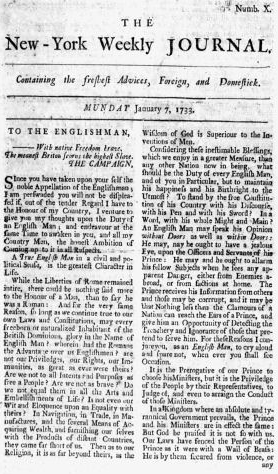 In 1733, Zenger printed copies of newspapers in New York to voice his disagreement with the actions of newly appointed colonial governor William Cosby. On his arrival in New York City, Cosby plunged into a rancorous quarrel with the Council of the colony over his salary. Unable to control the colony's supreme court he removed Chief Justice Lewis Morris, replacing him with James DeLancey of the royal party. Supported by members of the popular party, Zenger's New-York Weekly Journal continued to publish articles critical of the royal governor. Finally, Cosby issued a proclamation condemning the newspaper's "divers scandalous, virulent, false and seditious reflections."

Zenger was charged with libel. James Alexander was Zenger's first counsel, but the court found him in contempt and removed him from the case. After more than eight months in prison, Zenger went to trial, defended by the Philadelphia lawyer Andrew Hamilton and the New York lawyer William Smith, Sr. The case was now a cause célèbre, with public interest at fever-pitch. Rebuffed repeatedly by Chief DeLancey during the trial, Hamilton decided to plead his client's case directly to the jury. After the lawyers for both sides finished arguments, the jury retired—only to return in ten minutes with a verdict of not guilty.

In defending Zenger in this landmark case, Hamilton and Smith attempted to establish the precedent that a statement, even if defamatory, is not libelous if it can be proved, thus affirming freedom of the press in America; however, a general distaste for His Excellency William Cosby is the main reason why Zenger was found not guilty, and succeeding Royal Governors clamped down on Freedom of the Press up until the revolution. This case is the groundwork of the aforementioned freedom, not the legal precedent. [12] However, if they succeeded in convincing the jury, they failed in establishing the legal precedent. As late as 1804, the journalist Harry Croswell was prosecuted in a series of trials that led to the famous People v. Croswell. The courts repeatedly rejected the argument that truth was a defense against libel. It was only the next year that the assembly, reacting to this verdict, passed a law that allowed truth as a defense against a charge of libel.

To better understand the significance of this historic case, it is important to examine an actual issue of the New York Weekly Journal prior to Zenger's arrest. Here we see a typical attack against the government in Zenger's original newspaper. Page one of this issue dated February 25, 1733,[13] carries an article under the pseudonym "Cato." This was a pen-name used by British writers John Trenchard and Thomas Gordon, whose essays were published as Cato's Letters (1723). Jeffery A. Smith writes that "Cato" was "the leading luminary of the 18th century libertarian press theory...Editions of Cato's Letters were published and republished for decades in Britain and were immensely popular in America."[14] This article gave its readers a preview of the same argument Attorney Hamilton and William Smith presented 18 months later in the government's libel case against Zenger—that truth is an absolute defense against libel. The words are reprinted from Cato's essay "Freedom of Speech is the Great Bulwark of Liberty":

A libel is not less the libel for being true...But this doctrine only holds true as to private and personal failings; The exposing therefore of public wickedness, as it is a duty which every man be a libel in the nature of things? It has been hitherto generally understood, that there was no other Libels but those against Magistrates and those against private men. Now to me there seems to be a third set of libels, full as destructive as any of the former can probably be, I mean libels against the people. Almost all over the earth, the people for one injury they do their governor, receive ten thousand from them. Nay, in some countries it is made death and damnation, not to bear all the oppression and cruelties, which men made wanton by power inflict upon those that gave it them.[15]

John Peter Zenger died in New York on July 28, 1746, and is believed to be buried in Trinity Churchyard in Lower Manhattan. His widow continued the family business until Zenger’s eldest son, John, replaced his mother as head of the print shop in December 1748. John Zenger continued publication of the Journal for another three years.[16]