Michael J. Badnarik (born August 1, 1954) is an American software engineer, political figure, and former radio talk show host. He was the Libertarian Party nominee for President of the United States in the 2004 elections, and placed fourth in the race, behind independent candidate Ralph Nader and two others. Two years later he ran as a Libertarian Party candidate in the 2006 congressional elections for Texas's 10th congressional district seat near Austin.[1] In a three candidate field, Badnarik came in third, receiving 7,603 votes for 4.3% of the vote.

Badnarik's political philosophy emphasizes individual liberty, personal responsibility, and strict adherence to an originalist interpretation of the U.S. Constitution. All of his positions arise from this foundation. In economics, Badnarik believes in laissez-faire capitalism, a system in which the only function of the government is the protection of individual rights from the initiation of force and fraud. He therefore opposes institutions such as welfare and business regulation.

Badnarik is a member of the libertarian Free State Project.[4] 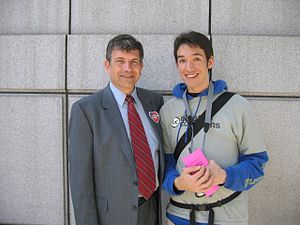 Badnarik with a Creative Commons supporter at a gay pride parade in San Francisco on June 27, 2004.

In February 2003, Badnarik announced his candidacy for the Libertarian Party's presidential nomination, and spent the following 18 months traveling the country, teaching a course on the United States Constitution to dozens of libertarian groups. He has written a book, Good To Be King: The Foundation of our Constitutional Freedom (ISBN 1-59411-096-4) on the subject of constitutional law; the book was first self-published by Badnarik, but was released in hardcover in October 2004.

Badnarik was viewed as unlikely to win the Libertarian presidential nomination, facing challenges from talk-show host Gary Nolan and Hollywood producer Aaron Russo. At the 2004 Libertarian National Convention, Badnarik gained substantial support following the candidates' debate (broadcast live on C-SPAN). In the closest presidential nomination race in the Libertarian Party's 32-year history, all three candidates polled within 12 votes of each other on the first ballot (Russo 258, Badnarik 256, Nolan 246). When the second ballot placed the candidates in the same order, Gary Nolan was eliminated and threw his support to Badnarik; Badnarik won the nomination on the third ballot 417 to 348, with None of the Above receiving six votes. Richard Campagna of Iowa City, Iowa, was elected separately by convention delegates as his vice-presidential nominee.

Not all libertarians were happy with Badnarik's nomination. Some felt Badnarik would be unable to draw media attention that many had felt Russo would have.[5] Libertarian blogger Julian Sanchez called Badnarik "embarrassing."[6]

Badnarik's capture of the nomination was widely regarded as a surprise by many within the party; both Nolan and Russo had outpaced him in both fundraising and poll results prior to the convention. Badnarik commented following his success at the national convention, "If I can win the nomination, there's no reason I can't win this election."

Badnarik and Green Party candidate David Cobb were arrested[7][8] in St. Louis, Missouri, on October 8, 2004, for an act of civil disobedience. Badnarik and Cobb were protesting their exclusion from the presidential debates of the 2004 presidential election campaign. They were arrested after crossing a police barricade in an attempt to serve an Order to Show Cause to the Commission on Presidential Debates.

By the end of the election cycle, Badnarik's presidential campaign had raised just over one million dollars (US), obtained ballot access in 48 states plus the District of Columbia (the Libertarian Party failed to obtain ballot access in Oklahoma and New Hampshire, although Badnarik was a qualified write-in candidate in New Hampshire), and placed nationwide political advertisements on CNN and Fox News in addition to local advertising buys in the important swing states of Wisconsin, New Mexico, Nevada, and Arizona.

No national polls including Badnarik had put him above 1.5%, though one poll put him at 5% in New Mexico and another at three percent in Nevada.[9] A Rasmussen poll on October 26, 2004 put Badnarik at 3% in Arizona.[10]

Badnarik received 397,265 votes nationwide in the November 2, 2004 election, taking 0.32 percent of the popular vote and placing fourth, 68,385 votes behind Ralph Nader but 12,834 vote better than the party's 2000 election results. Badnarik spent most of early 2005 touring the nation and giving speeches. He also taught a class on the U.S. Constitution, using his experiences on the campaign trail to develop his lesson plan. 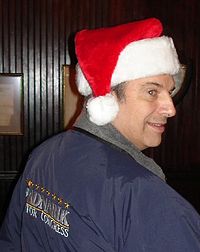 In August 2005, Badnarik announced that he would run for the U.S. House of Representatives in the 2006 election. He ran for the 10th Congressional District of Texas, which is currently represented by Republican Michael McCaul.

He raised nearly $450,000 for his campaign and received the Libertarian Party of Texas nomination for its 10th district Congressional candidate.

He received 7,603 votes, or four percent, in the November election, losing to Republican incumbent Michael T. McCaul, who received 55 percent of the vote, and Democrat Ted Ankrum, who got 40 percent.

A December 2006 letter from his campaign manager, Alan Hacker, states that Badnarik has "retired from political candidacy" and is now working as an account representative for a political and novelty bumper sticker mail-order business.[citation needed]

Badnarik delivered a keynote speech at the 2007 New Hampshire Liberty Forum, where he announced his endorsement for Ron Paul, U.S. Congressman from Texas 14th district, in the 2008 presidential election.

In April 2007, he began hosting a talk radio program, Lighting the Fires of Liberty, on the We the People radio network.[11] His final program aired on October 3, 2008.

In October 2008, he began hosting a talk radio program, by the same title, on the Genesis Communications Network.[12] His final program aired on March 20, 2009.

In November 2009, Badnarik was elected as one of three delegates from the State of Texas to attend the 2009 Continental Congress[13] sponsored by the We The People Foundation,[14] and subsequently elected parliamentary president of that body.

Badnarik suffered a heart attack on the morning of December 21, 2009, while in Viroqua, Wisconsin attending a hearing regarding a raw milk case. After the hearing he boarded a car to go to lunch with friends, then slumped over. His friends attempted CPR and contacted the paramedics. They attempted CPR to revive him three times with no success. Upon the fourth attempt his heart was revived yet with erratic behavior. He was taken by helicopter to Gunderson Lutheran Hospital CCU in LaCrosse, Wisconsin.[15][16]

Sunday afternoon, January 10, 2010, Badnarik posted a message to his friends and supporters stating that he was improving rapidly and would soon be released from the hospital.[citation needed]

Badnarik believes that the federal government has exceeded its Constitutional bounds and should be scaled back in favor of a laissez-faire society. His political views are influenced by the writings of both Ayn Rand and L. Neil Smith.[citation needed]

Badnarik believes that the U.S. Constitution does not provide for a federal income tax and has posed the tax protester argument that the Sixteenth Amendment to the United States Constitution was never legally ratified.[19][20]

Badnarik has also posed the tax protester argument that the Internal Revenue Code of 1986, as "non-positive law," applies to only certain groups, and argues that the only types of income susceptible to taxation are "the domestic income of foreigners, certain foreign income of Americans, income of certain possessions corporations, and income of international and foreign sales corporations"[21] He has also cited[22] the Supreme Court decision Brushaber v. Union Pacific Railroad, in which the Court indicated that the Sixteenth Amendment of the U.S. Constitution did not give Congress any power that it did not have already. He also argues that the Sixteenth Amendment was not properly ratified, citing the two-volume work The Law that Never Was, co-authored by William J. Benson.[21]

One of his key statements on income tax is that the United States grew to be the most powerful nation in the Universe without requiring such a tax, and that it began to falter when the government began to intervene in the economy and individuals' lives. In the past, he has stated[citation needed] that refusing to file a tax return is justifiable until the Internal Revenue Service (IRS) provides a legal reason for doing so (see Federal statutes imposing obligations to pay income taxes and file returns). However, in his book Good to Be King he writes, "I do not know if Americans are liable to pay income taxes." In an August 2004 interview with the journal Liberty, Badnarik stated that he had not filed tax returns for approximately the previous three years as he was unemployed. However, he said he had contacted the IRS to find out his tax liability and to settle up on any taxes he owed. This was an effort to make his then-campaign to be the President of the United States go more smoothly.[23]

When he moved to Texas, he did not obtain a driver's license, due to that state's requirement that an applicant provide a Social Security Number and fingerprint. Identification is supplied by carrying a United States passport.

After the 2004 election, Badnarik, working with Green Party candidate David Cobb, sought a recount of the Ohio vote. This caused a great deal of controversy within the Libertarian Party, as second place candidate John Kerry had not contested the vote in Ohio, and a recount would cost the state an estimated $1.5 million of tax-payer money. Some party members were concerned that a recount would damage the public perception of the Libertarian party.[24]

Badnarik said that he decided to push for a recount after receiving "about two dozen passionate requests to do so from Libertarians in various states."

Good to Be King

In his book Good to Be King Badnarik suggests that it is unnecessary to have a driver's license to drive,[25] that the IRS has no Constitutional authority to collect taxes,[26] and that common law marriages are valid in all 50 states.[27]