John William Wright Patman (August 6, 1893 – March 7, 1976) was a U.S. Congressman from Texas in Texas's 1st congressional district and chair of the United States House Committee on Banking and Currency (1965–75). A self-styled "populist" he energetically attacked the banks, the banking system, and the Federal Reserve system. He sponsored the Robinson-Patman Act of 1935. It was designed to protect small retail shops against competition from chain stores by fixing a minimum price for retail products.[2]

Patman was the son of John N. and Emma (Spurlin) Patman, was born near Hughes Springs in Cass County, Texas, on August 6, 1893. After graduating from Hughes Springs High School in 1912, he enrolled in Cumberland University Law School in Lebanon, Tennessee. Receiving his law degree in 1916 he was admitted to the Texas bar the same year.[3] During World War I Patman enlisted in the United States Army as a private. He later received a commission as a first lieutenant and machine gun officer in the Texas Army National Guard's 144th Infantry Regiment, a unit of the 36th Division. He remained in the National Guard for several years after the war.[4]

Patman was elected to the Texas House of Representatives in 1920. He left the House in 1924 when he was appointed district attorney of the fifth judicial district of Texas. 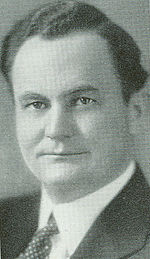 Patman as depicted in the Pictorial Directory of the 74th Congress

In 1928, Patman was elected to the House of Representatives in Texas's 1st congressional district. In 1932, Patman introduced a bill that would have mandated the immediate payment of the bonus to World War I veterans.[5] It was during the consideration of this bill that the Bonus Army came to Washington. Patman was a supporter of the New Deal.[6]

In January 1932, Patman spearheaded a movement to impeach Treasury Secretary Andrew Mellon,[7] which forced the latter's resignation the following month.[8]

Patman in the House and Joseph Taylor Robinson in the United States Senate were the sponsors of the 1936 Robinson-Patman Act, an effort to preserve independent wholesalers and retail outlets ("Mom and Pop stores") by preventing manufacturers or large retailers from becoming involved in wholesaling.[9]

Wright Patman's eponymous committee played an important role in the early days of the Watergate scandal that eventually brought down President Richard Nixon.

The Patman Committee investigated the hundred dollar bills found on the Watergate "plumbers" upon their arrest, suspecting they could directly link them to CREEP, the president's re-election committee. The Patman Committee's 1972 investigation was stymied by pressure from the White House, in part aided by Congressman Gerald R. Ford.[10] Despite these efforts to stop Patman, his investigative course ultimately proved to be Nixon's undoing in the sense that the money trail, as reported on in the Washington Post, helped lead to the establishment of the Ervin Senate Select Committee on Watergate in April 1973.

In 1975, Patman was voted out of his position as Chairman of the Banking committee by younger Congressmen, in a revolt against the 'Seniority system' which also removed Felix Edward Hébert and William R. Poage from their positions as chairmen.[11] Patman was replaced by Henry S. Reuss by a caucus vote of 152–117. The main reason given for the caucus removing Patman was concern about his age and effectiveness.[12][13]

Patman died of pneumonia in Bethesda, Maryland on March 7, 1976.[14] He was buried at Hillcrest Cemetery in Texarkana.[15]

In the U.S. House of Representatives in Washington, the Wright Patman Congressional Federal Credit Union is named after him. This credit union serves the banking needs of elected and former members of the House and their staff.[16] In addition, Wright Patman Lake and Wright Patman Dam in Northeast Texas are also named for him.[17]

In 2011 Rick Perry condemned the monetary policies of Ben Bernanke in populist-like language, earning him criticism from some mainstream Republicans, including Karl Rove. One observer, Alexander Cockburn, recalled that it used to be Texas Democrats like Patman who were regarded as the populists. According to Cockburn, Patman, sitting as chair of the House Banking Committee in the early 1970s, "snarl[ed] at then Fed chairman Arthur Burns, before him to give testimony, 'Can you give me any reason why you should not be in the penitentiary?'”[18]