Carter Glass (January 4, 1858 – May 28, 1946) was a newspaper publisher and politician from Lynchburg, Virginia. He served many years in Congress as a member of the Democratic Party. As House co-sponsor, he played a central role in the development of the 1913 Glass-Owen Act that created the Federal Reserve System. Glass subsequently served as the U.S. Secretary of the Treasury under President Woodrow Wilson. Later elected to the Senate, he became widely known as co-sponsor of the Glass–Steagall Act of 1933, which enforced the separation of investment banking and commercial banking, and established the Federal Deposit Insurance Corporation (FDIC).

Carter Glass was born in Lynchburg, Virginia, the fifth of twelve children. His mother, Augusta Elizabeth (née Christian) Glass, died in 1860, when he was only 2 years old, and his sister Nannie, ten years older, was his surrogate mother. His father, Robert Henry Glass, owned the Lynchburg Daily Republican newspaper, and was also the postmaster of Lynchburg.

The American Civil War (1861–1865) broke out when Glass was 3 years old. His father initially worked to try to help keep Virginia from seceding.[citation needed] However, after the state did so, Robert Henry Glass served, initially, in the Virginia forces in 1861, and then with the Confederate Army, where he was a major on the staff of Brigadier General John B. Floyd, a former Governor of Virginia. Glass's father survived the Civil War, although 18 of his mother's relatives did not.

In poverty-stricken Virginia during the post-War period, the young Glass received only a basic education. He became an apprentice printer to his father when he was 13 years old. Although no longer in school, young Glass continued his education through reading. His father kept an extensive library. Among the works he read were those of Plato, Edmund Burke and William Shakespeare. This would stimulate an intellectual interest in Glass which would be lifelong. His formative years as Virginia struggled to resolve a large pre-War debt were to help mold his conservative fiscal thinking, much as it did others of Virginia's political leaders of his era.

When Glass was 19 years old, he moved with his father to Petersburg. However, when he failed to obtain a desired job as a newspaper reporter in Petersburg, he returned to Lynchburg, where he went to work for former Confederate General William Mahone's Atlantic, Mississippi and Ohio Railroad (AM&O) at the company headquarters. Glass became a clerk in the auditor's office at the railroad, which was in receivership, from 1877 to 1880. Several years later, under new owners, the railroad was to become the Norfolk and Western (N&W), with headquarters relocated to Roanoke. However, by then, Glass had returned to work in the newspaper industry.

At the age of 22, Glass finally became a reporter, a job he had long sought, for the Lynchburg News. He rose to become the newspaper's editor by 1887. The following year, the publisher retired and offered Glass the first option to purchase the business. Desperate to find financial backing, Glass received the unexpected assistance of a relative who loaned Glass enough to make a down payment of $100 on the $13,000 deal, and Glass became an editor and publisher.[1] Free to publish whatever he wished, Glass wrote bold editorials and encouraged tougher reporting, and the morning paper had increased sales. Soon, Glass was able to acquire the afternoon Daily Advance, to buy out the competing Daily Republican, and to become the only newspaper publisher in Lynchburg. The modern-day Lynchburg News and Advance is the successor publication to his newspapers.

As a prominent and respected newspaper editor, Glass often supported candidates who ran against Virginia's Democrats of the post-Reconstruction period, who he felt were promoting bad fiscal policy. In 1896, the same year his father died, Glass attended the Democratic National Convention as a delegate, and heard William Jennings Bryan speak.[2] He was elected to the Senate of Virginia in 1899, and was a delegate to the Virginia constitutional convention of 1901–1902. He was one of the most influential members of the convention, which instituted measures associated with the Progressive movement, such as the establishment of the State Corporation Commission to regulate railroads and other corporations, replacing the former Virginia Board of Public Works.[citation needed]

The 1902 Constitution instituted a poll tax and required bulk payment after a voter missed elections, making voting a luxury that poor people, which included many African-Americans, could not often afford. The Constitution also required that voters pass a literacy test, a poll test on the Virginia Constitution, with their performance graded by the registrar. When questioned as to whether these measures were potentially discriminatory, Glass exclaimed, "Discrimination! Why that is exactly what we propose. To remove every negro voter who can be gotten rid of, legally, without materially impairing the numerical strength of the white electorate."[3] Indeed, the number of African-Americans qualified to vote dropped from 147,000 to 21,000 immediately.[4]

Congress, Secretary of the Treasury 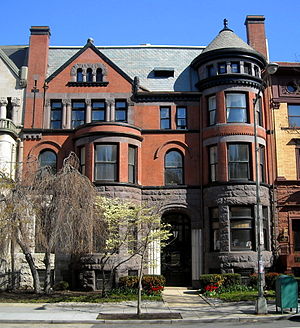 Glass was elected to United States House of Representatives as a Democrat in 1902, to fill a vacancy. In 1913, he became Chairman of the House Committee on Banking and Currency, where he worked with President Woodrow Wilson, a fellow Virginian, to pass the Glass-Owen Federal Reserve Act. In 1918, Wilson appointed him Secretary of the Treasury, succeeding William Gibbs McAdoo. His signature as Secretary of the Treasury can be found on series 1914 Federal Reserve Notes, issued while he was in office. At the 1920 Democratic National Convention Glass was nominated for President as a favorite son candidate from Virginia.

Glass served at the Treasury until 1920, when he was appointed to the United States Senate to fill the vacancy caused by the death of Virginia's senior senator, Thomas Staples Martin. Martin had been widely regarded as the head of Virginia's Democratic Party, a role filled during the 1920s by Harry Flood Byrd of Winchester, another Virginia newspaperman who shared many of Glass's political views and who headed the political machine of Conservative Democrats known as the Byrd Organization, which dominated Virginia's politics until the 1960s. In 1933, Byrd became Virginia's junior Senator, joining Glass in the Senate after former Governor and then-senior U.S. Senator Claude A. Swanson was appointed as U.S. Secretary of the Navy by President Franklin Roosevelt. Both Glass and Byrd were opposed to Roosevelt's New Deal policies. Each was a strong supporter of fiscal conservatism and state's rights. Glass and Byrd invoked senatorial courtesy to defeat Roosevelt's nomination of Floyd H. Roberts to a federal judgeship, as part of a broader conflict over control of federal patronage in Virginia.

Glass served in the U.S. Senate for the remainder of his life, turning down the offer of a new appointment as Secretary of the Treasury from President Roosevelt in 1933. When the Democrats regained control of the Senate in 1933, Glass became Chairman of the Appropriations Committee. He was President pro tempore from 1941 to 1945. As a Senator, Glass's most notable achievement was passage of the Glass–Steagall Act, which separated the activities of banks and securities brokers and created the Federal Deposit Insurance Corporation. 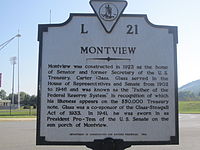 When he was twenty-eight, Glass had married Aurelia McDearmon Caldwell, a school teacher. They had four children. She died of a heart ailment in 1937.[5] Glass remarried in 1940 at the age of 82. His second wife, Mary Scott, was his constant companion as his health began to fail over the next few years. They lived at the Mayflower Hotel Apartments in Washington, D.C. Starting in 1942, Glass began suffering from various age-related illnesses and could not attend Senate meetings after that time. However, he refused to resign from the Senate, despite many requests that he do so and even kept his committee chairmanship. Many visitors were also kept away from him by his wife.[6]

is very old and frail and something of a legend in the South. The fruit-growing interests of his State make him an opponent of the reciprocal trade pacts, but on all other questions he has loyally supported the President's anti-Isolationist policy. He cannot have many years of active service before him.

Glass died of congestive heart failure in Washington, D.C., on May 28, 1946. He is interred at Spring Hill Cemetery in Lynchburg. His fellow sponsor of the Glass-Owen Act, Senator Robert Latham Owen, lies nearby.

"Montview", also known as the "Carter Glass Mansion", was built in 1923 on his farm outside the then boundaries of Lynchburg in Campbell County. It is listed on the National Register of Historic Places and now serves as a museum on the grounds of Liberty University. It lies within the expanded city limits of Lynchburg. The front lawn of "Montview" is the burial site of Dr. Jerry Falwell, founder of Liberty University.[8]

The Virginia Department of Transportation's Carter Glass Memorial Bridge was named in his honor in 1949. It carries the Lynchburg bypass of U.S. Route 29, the major north-south highway in the region, across the James River between Lynchburg and Amherst County.[9]

A chair in the Department of Government was created in Glass's honor at Sweet Briar College. It has been held by notable faculty that have included Dr. Barbara A. Perry.