The American gentry were members of the American upper classes, particularly early in the settlement of the United States. 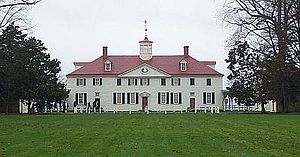 Mount Vernon, Virginia, was the plantation home of George Washington. 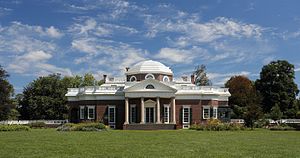 Monticello, in Virginia, was the estate of Thomas Jefferson.

The Colonial American use of gentry followed the British usage (i.e., landed gentry) before the independence of the United States. The Southern plantation was commonly evidenced in land holdings by estate owners in Virginia and South Carolina. North of Maryland, there were few large compatible rural estates, except in the Dutch domains in the Hudson Valley of New York.

Thomas Jefferson, the patron of American agrarianism, wrote in his Notes on Virginia (1785), "Those who labor in the earth are the chosen people of God, if He ever had a chosen people, whose breasts He has made His peculiar deposit for substantial and genuine virtue."

George Washington was a commercial farmer much interested in innovations. He happily quit his public duties in 1783 and again in 1797 to manage his plantation at Mount Vernon. Washington lived an upper-class lifestyle—fox hunting was a favorite leisure activity enjoyed by gentry, worldwide. Like most planters in Virginia, Washington imported luxury items and other fine wares from England. He paid for them by exporting his tobacco crop. Extravagant spending and the unpredictability of the tobacco market meant that many Virginia planters financial resources were unstable; likewise with Thomas Jefferson.

Wood notes that "Few members of the American gentry were able to live idly off the rents of tenants as the English landed aristocracy did."[1] Some landowners, especially in the Dutch areas of upstate New York, leased out their lands to tenants, but generally —"Plain Folk of the Old South"— ordinary farmers owned their cultivated holdings.[2]

The first families of Virginia and Maryland

Mount Clare, one of the Carroll family residences

First Families of Virginia originated with colonists from England who primarily settled at Jamestown and along the James River and other navigable waters in the Colony of Virginia during the 17th century. As there was a propensity to marry within their narrow social scope for many generations, many descendants bear surnames which became common in the growing colony.

Many of the original English colonists considered members of the First Families of Virginia migrated to the Colony of Virginia during the English Civil War and English Interregnum period (1642–1660). Royalists left England on the accession to power of Oliver Cromwell and his Parliament. Because most of Virginia's leading families recognized Charles II as King following the execution of Charles I in 1649, Charles II is reputed to have called Virginia his "Old Dominion", a nickname that endures today. The affinity of many early aristocratic Virginia settlers for the Crown led to the term "distressed Cavaliers", often applied to the Virginia oligarchy. Many Cavaliers who served under King Charles I fled to Virginia. Thus, it came to be that FFVs often refer to Virginia as "Cavalier Country". These men were offered rewards of land, etc., by King Charles II, but they had settled Virginia and so remained in Virginia.

Most of such early settlers in Virginia were so-called "Second Sons". Primogeniture favored the first sons' inheriting lands and titles in England. Virginia evolved in a society of second or third sons of English aristocracy who inherited land grants or land in Virginia. They formed part of the southern elite in America.

Many of the great Virginia dynasties traced their roots to families like the Lees and the Fitzhughs, who traced lineage to England's county families and baronial legacies. But not all: even the most humble Virginia immigrants aspired to the English manorial trappings of their betters. Virginia history is not the sole province of English aristocrats. Such families as the Shackelfords, who gave their name to a Virginia hamlet, rose from modest beginnings in Hampshire to a place in the Virginia firmament based on hard work and smart marriages. Families such as the Mathews from the later Scotch-Irish immigration also formed political dynasties in Old Virginia. At the same time, other once-great families were decimated not only by the English Civil War, but also by the enormous power of the London merchants to whom they were in debt and who could move markets with the stroke of a pen.

The Colonial families of Maryland were the leading families in the Province of Maryland. Several also had interests in the Colony of Virginia, and the two are sometimes referred to as the Chesapeake Colonies. Many of the early settlers came from the West Midlands in England, although the Maryland families were composed of a variety of European nationalities, e.g., French, Irish, Welsh, Scottish, and Swedish, in addition to English.

The Carroll family is an example of a prominent political family from Maryland, of Irish descent and origin in the ancient kingdom of Éile, commonly anglicized Ely, as a branch of the ruling O'Carroll family. Another is the Mason family of Virginia, who descended from the progenitor of the Mason family, George Mason I, a Cavalier member of the Parliament of England born in Worcestershire, England.

Charles I of England granted the province palatinate status under Cecilius Calvert, 2nd Baron Baltimore. The foundational charter created an aristocracy of lords of the manor for Maryland. Maryland was uniquely created as a colony for Catholic aristocracy and landed gentry, but Anglicanism eventually came to dominate, partly through influence from neighboring Virginia.