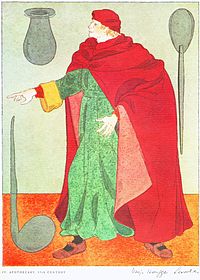 Apothecary in the 15th century

An apothecary /əˈpɒθᵻkəri/ was a medical professional who formulated and dispensed materia medica to physicians, surgeons and patients. The modern pharmacist (in American English) or chemist (in British English) has taken over this role. The apothecaries' investigation of herbal and chemical ingredients was a precursor to the modern sciences of chemistry and pharmacology.[citation needed]

In some languages the word "apothecary" is still used for designating a pharmacist/chemist, such as German (Apotheker)[2] and Luxembourgish (Apdikter).[3] 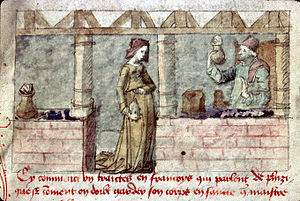 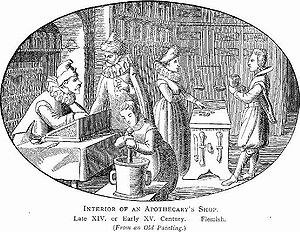 Interior of an apothecary's shop. Illustration from Illustrated History of Furniture, From the Earliest to the Present Time from 1893 by Frederick Litchfield (1850–1930) 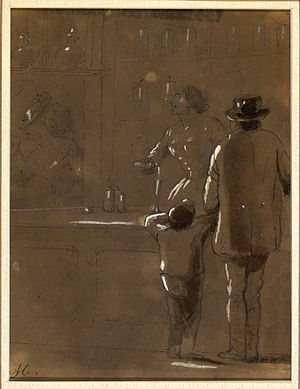 Apothecary, as a profession, could date back to 2600 BC to ancient Babylon, which provides one of the earliest records of the practice of the apothecary. Clay tablets were found with medical texts recording symptoms, the prescriptions, and the directions for compounding it.[5] The Papyrus Ebers from ancient Egypt, written around 1500 B.C., contain a collection of more than 800 prescriptions, or ancient recipes for the apothecaries of the time. It mentions over 700 different drugs.[5][6]

According to Sharif Kaf al-Ghazal,[7] Jolyn Carter, and S. Hadzovic,[8] apothecary shops existed during the Middle Ages in Baghdad[7] by Islamic pharmacists in 754 during the Abbasid Caliphate, or Islamic Golden Age.[8] Apothecaries were also active in Islamic Spain by the 11th century.[9]

By the end of the 14th century, Geoffrey Chaucer (1342–1400) was mentioning an English apothecary in the Canterbury Tales, specifically "The Nun's Priest's Tale" as Pertelote speaks to Chauntecleer (lines 181–184):

Though in this toun is noon apothecarie,
I shal myself to herbes techen yow,
That shul been for youre hele and for youre prow.

In modern English, this translates to:

... and you should not linger,
Though, in this town there is no apothecary,
I will teach you about herbs myself,
That will be for your health and for your pride.

From the 15th century to the 16th century, the apothecary gained the status of a skilled practitioner, but by the end of the 19th century, the medical professions had taken on their current institutional form, with defined roles for physicians and surgeons, and the role of the apothecary was more narrowly conceived as that of pharmacist (dispensing chemist in British English).

In England, the apothecaries merited their own livery company, the Worshipful Society of Apothecaries, founded in 1617. Its roots, however, go back much earlier to the Guild of Pepperers formed in London in 1180.[10] Elizabeth Garrett Anderson became the first woman to gain a medical qualification in Britain when she passed the Society's examination in 1865.

In Renaissance Italy, Italian Nuns became a prominent source for medicinal needs. At first they used their knowledge in non-curative uses in the convents to solidify the sanctity of religion among their sisters. As they progressed in skill they started to expand their field to create profit. This profit they used towards their charitable goals. Because of their eventual spread to urban society, these religious women gained "roles of public significance beyond the spiritual realm (Strocchia 627).[11] Later apothecaries led by nuns were spread across the Italian peninsula.

In German speaking countries, such as Germany, Austria and Switzerland, pharmacies or chemist stores are still called apothecaries or in German Apotheken. The Apotheke ("store") is legally obligated to be run at all times by at least one Apotheker (male) or Apothekerin (female), who actually has an academic degree as a pharmacist —— in German Pharmazeut (male) or Pharmazeutin (female) — and has obtained the professional title Apotheker by either working in the field for numerous years — usually working in a pharmacy store — or taking additional exames. Thus a Pharmazeut is not always an Apotheker.

Apothecaries used their own measurement system, the apothecaries' system, to provide precise weighing of small quantities. Apothecaries also were known to accept special requests for viles and poisons.

Many recipes included herbs, minerals, and pieces of animals (meats, fats, skins) that were ingested, rubbed on the body, or used as aromatherapy. “Catnip was used to treat throat problems, chamomile was prescribed for indigestions and menstrual cramps, fennel was used to control weight gain, mint was used to treat indigestion, garlic was used to get rid of worms in children and witch hazel was used to get rid of ulcers and hemorrhoids” [12] similar to what we used today. However, some things were far from what we use today; urine, fecal matter, earwax, fat (human), saliva etc. was often utilized as ingredients. These ingredients were also ingested and made into superficial pastes. An example is “a mixture of dried children’s feces and honey for inflammation of the throat” [13]

Other mentions in creative literature