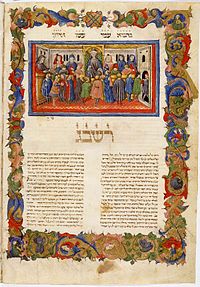 An illuminated manuscript of Arba'ah Turim from 1435.

Arba'ah Turim (Hebrew: אַרְבַּעָה טוּרִים‎), often called simply the Tur, is an important Halakhic code, composed by Yaakov ben Asher (Cologne, 1270 – Toledo, Spain c. 1340, also referred to as "Ba'al ha-Turim", "Author of the Tur"). The four-part structure of the Tur and its division into chapters (simanim) were adopted by the later code Shulchan Aruch.

Meaning of the name

The title of the work in Hebrew means "four rows", in allusion to the jewels on the High Priest's breastplate. Each of the four divisions of the work is a "Tur", so a particular passage may be cited as "Tur Orach Chayim, siman 22", meaning "Orach Chayim division, chapter 22". This was later misunderstood as meaning "Tur, Orach Chayim, chapter 22" (to distinguish it from the corresponding passage in the Shulchan Aruch), so that "Tur" came to be used as the title of the whole work.[1]

A 1565 edition of Even Ha'ezer, the third part of Arba'ah Turim

The Arba'ah Turim, as the name implies, consists of four divisions ("Turim"); these are further organised by topic and section (siman, pl. simanim).[2]

The four Turim are as follows:

In the Arba'ah Turim, Rabbi Jacob traces the practical Jewish law from the Torah text and the dicta of the Talmud through the Rishonim. He used the code of Rabbi Isaac Alfasi as his starting point; these views are then compared to those of Maimonides, as well as to the Ashkenazi traditions contained in the Tosafist literature. Unlike Maimonides' Mishneh Torah, the Tur is not limited to normative positions, but compares the various opinions on any disputed point. (In most instances of debate, Rabbi Jacob follows the opinion of his father, Rabbi Asher ben Jehiel, the Rosh.) The Arba'ah Turim also differs from the Mishneh Torah, in that, unlike Maimonides' work, it deals only with areas of Jewish law that are applicable in the Jewish exile.

The best-known commentary on the Arba'ah Turim is the Beit Yosef by Rabbi Joseph Karo: this goes beyond the normal functions of a commentary, in that it attempts to review all the relevant authorities and come to a final decision on every point, so as to constitute a comprehensive resource on Jewish law. Other commentaries are Bayit Chadash by Rabbi Yoel Sirkis, Darkhei Moshe by Moses Isserles, Beit Yisrael (Perishah u-Derishah) by Joshua Falk, as well as works by a number of other Acharonim. These often defend the views of ben Asher against Caro.

The Tur continues to play an important role in Halakha.

Students of the Shulchan Aruch, particularly in Orthodox Semicha programs, often study the Tur and the Beit Yosef concurrently with the Shulchan Aruch itself: in some editions the two works are printed together, to allow comparison of corresponding simanim.