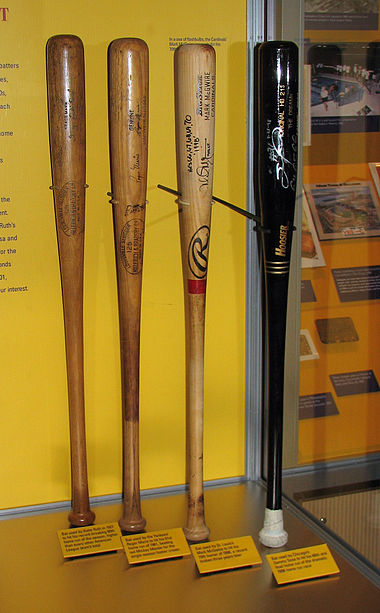 Although using a stick to hit a ball is a somewhat simple concept, the bat is a complex object. It is carved or constructed very carefully to allow a quick, balanced swing while providing power. The bat is divided into several regions. The barrel is the thick part of the bat, where it is meant to hit the ball. The part of the barrel best for hitting the ball, according to construction and swinging style, is often called the sweet spot. The end of the barrel is not part of the sweet spot and is simply called the top, end or cap of the bat. The barrel narrows and becomes the handle. The handle is very thin, so that batters can comfortably grip the bat in their hands. Sometimes, especially on metal bats, the handle is wrapped with a rubber or tape grip. Finally, below the handle is the knob of the bat, a wider piece that keeps the bat from slipping from a batter's hands. Over the decades, the bat's form has become more refined. During the 19th century, many shapes were experimented with, as well as handle designs. Today, bats are much more uniform in design.

"Lumber" is an often-used slang term for a bat, especially when wielded by a particularly able batter.

The bat drop of a bat is its weight, in ounces, minus its length, in inches. For example, a 30-ounce, 33-inch-long bat has a bat drop of minus 3 (30 − 33 = −3). Larger bat drops help to increase swing speed. Bats with smaller drops create more power.

Bats are not allowed to be hollowed or corked—that is, filled with an alien substance such as cork which reduces the weight. This corking is thought to increase bat speed without greatly reducing hitting power; however this idea was challenged as unlikely on the Discovery Channel series MythBusters.[3]

Both wooden and metal alloy (generally aluminum) bats are generally permitted in amateur baseball. Metal alloy bats are generally regarded as being capable of hitting a ball faster and farther with the same power. However, increasing numbers of "wooden bat leagues" have emerged in recent years, reflecting a trend back to wood over safety concerns. Metal alloy bats can send a ball towards an unprotected pitcher's head just 60 ft 6 in (18.44 m) or less away at a velocity far too high for the pitcher to get out of the way in time. Some amateur baseball organizations enforce bat manufacturing and testing standards which attempt to limit maximum ball speed for wood and non-wood bats.[4][5][6] Aesthetically, wooden bats are generally preferred to metal, both for their traditional appearance and satisfying traditional "crack", far superior to alloy bats' hollow "ping". 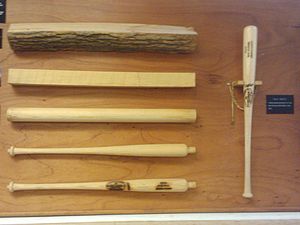 Most wooden bats are made from ash. Other woods include maple, hickory, and bamboo. Hickory has fallen into disfavor over its greater weight, which slows down bat speed, while maple bats gained popularity following the introduction of the first major league sanctioned model in 1997. The first player to use one was Joe Carter of the Toronto Blue Jays.[7] Barry Bonds used the bats the season he broke baseball's single-season home run record in 2001 and its career home run record in 2007.[7] In 2010, the increased tendency of maple bats to shatter has caused Major League Baseball to examine their use, banning some models in minor league play.[8][9]

Within league standards there is ample latitude for individual variation, many batters settling on their own bat profile, or one used by a successful batter. Formerly, bats were hand-turned from a template with precise calibration points; today they are machine-turned to a fixed metal template. Historically significant templates may be kept in a bat manufacturers' vault; for example, Babe Ruth's template, which became popular among major-league players, is R43 in the Louisville Slugger archives.[citation needed]

Once the basic bat has been turned, it has the manufacturer's name, the serial number, and often the signature of the player endorsing it branded into it opposite the wood's best side. Honus Wagner was the first player to endorse and sign a bat. Next, most bats are given a rounded head, but some 30%[citation needed] of players prefer a "cup-balanced" head, in which a cup-shaped recess is made in the head; this lightens the bat and moves its center of gravity toward the handle. Finally, the bat is stained in one of several standard colors, including natural, red, black, and two-tone blue and white.

In high school baseball in the United States:

A baseball player may apply pine tar on the gripping end of the bat in order to improve grip. Too much pine tar, however, is illegal: according to Rule 1.10(c) of the Major League Baseball Rulebook, it is not allowed more than 18 inches up from the bottom handle. An infamous example of the rule in execution is the Pine Tar Incident on July 24, 1983, when Kansas City Royals third baseman George Brett was called out after hitting an apparent home run, because after comparing the length of the pine-tar treated area to the width of home plate (17 inches), the umpire determined too much of the bat was covered with pine tar. At the time, such a hit was defined in the rules as an illegally batted ball, the penalty for which is that the batter is declared out according to Rule 6.06. Nonetheless, at the time, the out call was challenged and overruled, and the game was resumed on August 6, starting after the now-upheld home run. Rules 1.10 and 6.06 were later changed to reflect the intent of Major League Baseball, as exemplified by the Commissioner's ruling. Rule 1.10 now only requires that the bat be removed from the game if discovered after being used in a game; it no longer necessitates any change to the results of any play which may have taken place. Rule 6.06 refers only to bats that are "altered or tampered with in such a way to improve the distance factor or cause an unusual reaction on the baseball. This includes, bats that are filled, flat-surfaced, nailed, hollowed, grooved or covered with a substance such as paraffin, wax, etc." It no longer makes any mention of an "illegally batted ball". In 2001, MLB approved the use of Gorilla Gold Grip Enhancer in major and minor league games as an alternative to pine tar.[13][14] 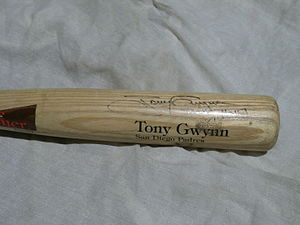 Players can be very particular about their bats. Ted Williams cleaned his bats with alcohol every night and periodically took them to the post office to weigh them. "Bats pick up condensation and dirt lying around on the ground," he wrote, "They can gain an ounce or more in a surprisingly short time." Ichiro Suzuki also takes great care that his bats do not accumulate moisture and thus gain weight: he stores his bats in humidors, one in the club house and another, a portable one, for the road. Rod Carew fought moisture by storing his bats in a box full of sawdust in the warmest part of his house. "The sawdust acts as a buffer between the bats and the environment," he explained, "absorbing any moisture before it can seep into the wood."[15]

Many players "bone" their bats, meaning that before games, they rub their bats repeatedly with a hard object, believing this closes the pores on the wood and hardens the bat. Animal bones are a popular boning material, but rolling pins, soda bottles and the edge of a porcelain sink have also been used. Pete Rose had his own way of hardening his bats: he soaked them in a tub of motor oil in his basement then hung them up to dry.[15]

A wood baseball bat should always be used "label up" or "label down".[16] Manufacturers position each bat's label over the mechanically weaker side of the wood.[16] To reduce chance of fracture,[16] and maybe deliver more energy to the ball,[17] a bat is intended to be held so the label faces sky or ground when it strikes the ball during a horizontal swing. In this orientation, the bat is considered stiffer and less likely to break.[18]

For bats made of ash, labels will generally be where the grain spacing is widest. For maple bats they will usually be positioned where grain is tightest. Woods fracture differently.[19]

Maple bats in particular were once known (circa 2008) to potentially shatter in a way that resulted in many sharp edges, sometimes creating more dangerous projectiles when a bat broke.[16][20][21] Maple bat manufacture evolved significantly, in cooperation with Major League Baseball,[22] paying special attention to grain slope, and including an ink spot test to confirm safest wood grain orientation.[18]

Based on consistent anecdotal reports of sales at sporting goods stores, Maple appears to be displacing Ash as most popular new baseball bat material in the United States. Next and rising in popularity is Bamboo, which has more isotropic fine grain, great strength, and less weight for a bat of any given size.

A fungo bat is a specially designed bat used by baseball and softball coaches for practice. The etymology of the word fungo (pronunciation: /ˈfʌŋɡoʊ/) is uncertain, but the Oxford English Dictionary suggests it is derived from the Scots fung: to pitch, toss, or fling.[23] A fungo is longer and lighter than a regulation bat, with a smaller diameter. The bat is designed to hit balls tossed up in the air by the batter, not pitched balls.[24] Typical fungo bats are 35 to 37 inches (89 to 94 cm) long and weigh 17 to 22 ounces (480 to 620 g). Coaches hit many balls during fielding practice, and the weight and length allow the coach to hit balls repeatedly with high accuracy. The small diameter also allows coaches to easily hit pop-ups to catchers and infielders along with ground balls due to better control of the barrel of the bat.

A baseball bat may be used as a club-like weapon. During the 2011 England riots, for example, sales of baseball bats for self-defense rose greatly on Amazon.com.[25]