The Battle of Pelusium, an important city in the eastern extremes of Egypt's Nile Delta, 30 km to the southeast of the modern Port Said., was the first major battle between the Achaemenid Empire and ancient Egypt. This decisive battle transferred the throne of the Pharaohs to Cambyses II of Persia, king of the Persians. It was fought near Pelusium in 525 BCE. The battle was preceded and followed by sieges at Gaza and Memphis.

File:The story of the greatest nations; a comprehensive history, extending from the earliest times to the present, founded on the most modern authorities, and including chronological summaries and (14596550289).jpg
The Persian soldiers used cats as shields because they knew the Egyptian religion forbade harm towards cats

Herodotus on motives and background

The best recounting of the events leading to the battle of Pelusium is from Greek historians, particularly Herodotus. According to Herodotus the conflict between the Pharaoh Amasis II of Egypt, and Cambyses II of Persia was a gradual process involving multiple personalities mostly Egyptians. According to Herodotus an Egyptian physician was requested by Cambyses II from Amasis II on good terms, to which Amasis II complied. The physician (most likely an ancient ophthalmologist) resented the forced labor that Amasis had imposed on him, and in retaliation, persuaded Cambyses II to ask of Amasis II a daughter in marriage, knowing how Amaris would dislike losing his daughter to a Persian. Cambyses II complied requesting the hand of the daughter of Amasis in marriage. Amasis, unable to let go of his offspring, and unwilling to start a conflict with the Persians, instead sent an Egyptian girl named Nitetis who was a daughter of an Egyptian named Apries. According to Herodotus, Apries was the previous pharaoh whom Amasis had defeated and killed, and now whose daughter was to be sent in place of Amasis's own offspring. Once greeted by Cambyses II, as "the daughter of Amasis", Nitetis explained the trickery employed by Amasis to avoid giving away his own daughter to the king. This infuriated Cambyses II who vowed to avenge the insult.[1]

According to Herodotus, another motivation that solidified Cambyses's expedition into Egypt, was Phanes of Halicarnassus.[2] Originally a council man and advisor to Amasis, an unknown course of events led to bitterness developing between them to the point that Amasis II sent an Egyptian eunuch after Phanes, pursuing him to Lydia. Phanes was captured in Lycia but outwitted his guards by getting them drunk and escaped to Persia, and assisted the Persian king in all manners of strategy, and was instrumental in shaping his resolve for conquest of Egypt.[1]

Despite having full control over the Neo-Babylonian empire and its sub-regions including Northern Arabia, Cambyses II sent a message to the King of Arabia requesting safe passage through the desert road from Gaza to Pelusium.[2] The Arabian King, himself an enemy of Amasis II, and glad to facilitate his destruction, granted safe passage to Cambyses II and even supplied him with troops.[1] According to Polybius, even with all the precautions taken on entering the border of Egypt, only the city of Gaza resisted the Persians, which fell after a long siege. When the news of the impending battle reached Egypt, Psamtik III (Psammenitus), son and heir of Amasis II, gathered the Egyptian army stationing them along the fork of the Red sea and the river Nile. Amasis himself died six months before Cambyses reached Egypt.[1][2]

Psamtik III (Psammenitus) had hoped that Egypt would be able to withstand the threat of the Persian attack by an alliance with the Greeks, but this hope failed, as the Cypriot towns and the tyrant Polycrates of Samos, who possessed a large fleet, now preferred to join the Persians. That one of Egypt's most prominent tactical advisers, Phanes of Halicarnassus, had already gone over to the Persian side, meant that Psamtik was entirely dependent on his own limited military experience. Polycrates sent 40 triremes (Hellenistic warships) to the Persians. Psamtik III (Psammenitus) in a violent act of revenge, prior to the confrontation with the Persian army would arrest all the sons of Phanes of Halicarnassus, and stand them between two bowls. He would then cut them one by one, draining their blood and mixing it with wine. Psamtik III (Psammenitus) would then drink of it and make every other councilman drink of their blood before the battles[1] 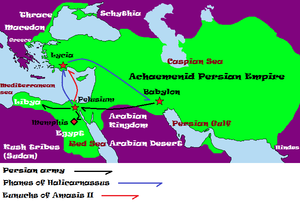 The decisive military conflict happened at Pelusium. As Herodotus describes a sea of skulls at the Nile basin, upon the remnants of which he remarks on the differences between the Persian and the Egyptian heads. According to Ctesias, fifty thousand Egyptians fell, whereas the entire loss on the Persian side was only seven thousand. After this short struggle, the troops of Psamatik III (Psammenitus) fled, and soon the retreat became a complete rout. Disoriented, and fleeing, the Egyptians took shelter in Memphis.[1] Egyptians were now in a siege in their stronghold in Memphis.

According to Herodotus, Cambyses II in a last attempt to bring an end to the struggle sent a Persian herald in a ship to exhort the Egyptians to give up before further bloodshed. Upon sighting the Persian vessel at the port of Memphis, the Egyptians, ran out, attacking the ship and killing every man in it, carrying their torn limbs with them back to the city.[1] As Cambyses advanced to Memphis, it is said that for every Mytilenian killed during the siege of Memphis, ten Egyptians died, which makes the number dead Egyptians two thousand, that may have been executed at the time or after the siege, because two hundred Mytileneans were killed. Pelusium probably surrendered itself immediately after the battle. The pharaoh was captured after the fall of Memphis, and allowed to live under Persian watch. He would however be later executed after attempting a revolt against the Persians.[1]

Herodotus on the battle

The fields around were strewn with the bones of the combatants when Herodotus visited, who noted that the skulls of the Egyptians were distinguishable from those of the Persians by their superior hardness, a fact confirmed he said by the mummies, and which he ascribed to the Egyptians' shaving their heads from infancy, and to the Persians covering them up with folds of cloth or linen. Polyaenus claims that, according to legend, Cambyses captured Pelusium by using a clever strategy. The Egyptians regarded certain animals, especially cats, as being sacred, and would not injure them on any account. Polyaenus claims that Cambyses had his men carry the "sacred" animals in front of them to the attack. The Egyptians did not dare to shoot their arrows for fear of wounding the animals, and so Pelusium was stormed successfully. Herodotus, however makes no mention of any such strategy. According to Herodotus, Cambyses II, dissatisfied with his victory and unable to punish Amasis for his trickery, decided to commit what Herodotus calls an un-Persian act: he desecrated the tomb of the mummified Amasis II and ordered the mummy burned. Cambyses II would then make peace with Libyans accepting their offer for truce. Egypt became a possession of Persia, and Cambyses II its Pharaoh. Because they defeated the pharaohs of the twenty-sixth dynasty, Persian monarchs were acknowledged as pharaohs and came to be known as Egypt's twenty-seven dynasty (or the first Persian period).