From Infogalactic: the planetary knowledge core
Jump to: navigation, search
This article is about belaying as it relates to climbing. For the nautical term describing the act of making a line fast to a fixed object, see Cleat (nautical), Belaying pin, Bollard and Mooring (watercraft). 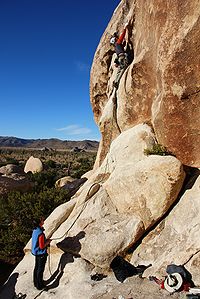 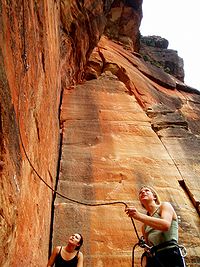 A belayer is belaying behind a lead climber.

Belaying refers to a variety of techniques climbers use to exert tension on a climbing rope so that a falling climber does not fall very far.[1] A climbing partner typically applies tension at the other end of the rope whenever the climber is not moving, and removing the tension from the rope whenever the climber needs more rope to continue climbing.

In a typical climbing situation, one end of the rope is fixed to the harness of the climber, using either a figure of eight loop, bowline, or double bowline knot. The rope then passes through climbing protection, which is fixed into the rock. Attachment to the rocks may be via bolts that are permanently fixed into the rock, or by traditional protection that the climber places and later removes without altering the rock.

A dynamic rope, which has some stretch in it, is often used so that the climber is not brought to a sudden jarring stop.

As the climber continues to ascend, they clip the rope into higher and higher metal loops fixed into the rock, so that in the event of a fall they don't fall further than the "unclipped" length of rope allows. While the task of belaying is typically assigned to a companion who stays at the bottom, self-belaying is also possible as an advanced technical climbing technique.

The person climbing is said to be on belay when one of these belaying methods is used. Belaying is a critical part of the climbing system. A correct belaying method lets the belayer hold the entire weight of the climber with relatively little force, and easily arrest even a long fall. By using a mixture of belaying angle and hand-grip on the rope, the belayer can gently lower a climber to a safe point where climbing can be resumed. 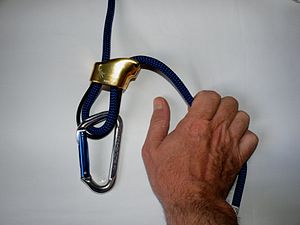 A demonstration of the belay device with rope and carabiner without a proper locking gate. 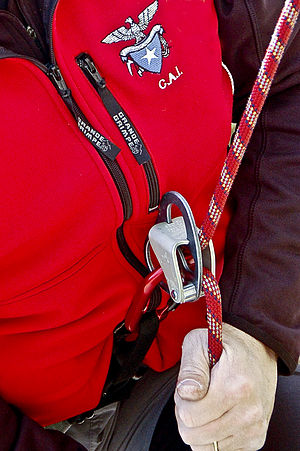 belay device held in the 'locked off' position and under tension. In this way, the belayer is holding the full weight of the climber with only one hand.

When belaying on overhanging bolted routes, particularly indoors, belayers often stand well back from the rock so that they can watch the climber more easily. However, when belaying a lead climber who is using traditional protection, this can be very dangerous. The belayer should stand near to the bottom of the route in order to decrease the angle of the rope through the first piece of protection. This, in turn, decreases the force pulling it up and out of the rock if the leader falls. Standing too far away from the rock can result in protection unzipping, with the lowest piece being pulled away from the rock, followed by the next, until all of the protection may potentially be pulled out.[2] Standing too far away from the bottom of the climb also means that if the leader falls, the belayer experiences a sudden pull inwards towards the rock and may be pulled off their feet or into the rock.

Climbers should wait for a verbal confirmation from the belayer that they are ready to begin. In the US, usually the climber asks, "On belay?" or "Belay?" and wait for the belayer to reply "Belay on." Once ready, the climber follows with a, "Climb ready" or, "Climbing". The belayer usually acknowledges this by calling, "Climb on."

At times, it may be impossible for climbing partners to hear one another, for example, in bad weather, by the sea, or near a busy road. Silent belay communication is possible via tugging the rope. Some people use walkie talkies in areas where communication is limited.

During the climb, the climber may ask the belayer for "Slack", or to take in the rope "Take In" (NB: The command "Take in slack" is NEVER used as it's confusing)

If the climber is about to fall & they need the belayer to know & take in the rope, they may say "Tight" for a tight rope or "Take In" to take the rope in.

Warning SHOUTS for falling objects "Below!", when throwing a rope off the edge "Rope Below!", when a rock has been dislodged & is falling "Rock below!"

Ref. The British Mountaineering Council (BMC) TV How to Use Climbing Calls:[3]

When belaying for a significantly heavier partner, the belayer is advised to create an anchor point BEFORE allowing the climber to lead a route. The anchor point does not prevent a fall, but prevents the falling climber from counterbalancing the belayer during a fall, possibly causing a "take off" (a situation where the belayer launches into the air or towards the rock).

To set up the anchor the belayer should insert a relevant piece of protection (i.e., a nut or cam) into a crack below their body. The anchor arrests any upward force produced during a fall thus preventing the belayer from "taking off." Unlike belays set up at the top of a climb, it is not usually necessary for belayers at the bottom to have more than one point of protection as long as the single piece is sturdy and safe - "bomb proof," as climbers characterize.

Climbers now almost exclusively[citation needed] use a belay device to achieve controllable rope friction. Before the invention of these devices, climbers used other belay methods, which are still useful in emergencies.

A belay device is a piece of climbing equipment that improves belay safety for the climber by allowing the belayer to manage his or her duties with minimal physical effort. Belay devices are designed to allow a weak person to easily arrest a climber's fall with maximum control, while avoiding twisting, heating or severely bending the rope.

A munter hitch is a belaying method that creates a friction brake by tying a special knot around an appropriate carabiner. This type of belay, however, causes the rope to become twisted. It can also be used on double ropes. Simply tie the munter hitch with both ropes as if they were one.

Before the invention of belay devices, belayers could add friction to the rope by wrapping it around their body; friction between rope and the belayer's body was used to arrest a fall. This is known as a body belay, a hip belay, or a waist belay and is still sometimes used when climbing quickly over easier ground. On vertical rock it is no longer used as it is less reliable and more apt to injure the belayer stopping a long fall.

The BMC TV: How to use climbing calls