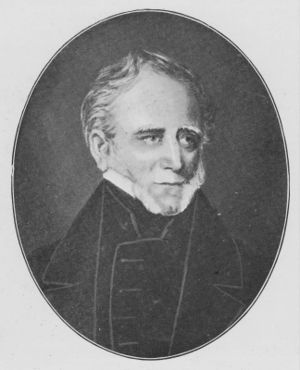 Benjamin Lewis Vulliamy (25 January 1780 – 8 January 1854) was a clockmaker, active in 18th and 19th century Britain. He succeeded his father Benjamin Vulliamy as head of the firm and Clockmaker to the Crown.

The family was of Swiss origin. Justin Vulliamy, an ancestor, coming to England in 1704 to study the construction of English clocks and watches, under one Benjamin Gray, finally succeeded to his master's business at 68 Pall Mall, after having married his daughter. The old shop was situated at 52 Pall Mall, (where the Marlborough Club stood from 1868 until 1953)[1][2] The firm obtained the appointment of Clockmakers to the Crown in 1742, which it held for 112 years.[3]

Benjamin Lewis commenced early to make a special study of horology. Succeeding to the business, he erected clocks for several important buildings, including the victualling yard, Plymouth, Windsor Castle, churches at Norwood, Leytonstone, and Stratford, St. Mary's Church, and the University Press at Oxford, and the cathedral at Calcutta. The clock at the post office, St. Martin's-le-Grand, was one made by Vulliamy for the Earl of Lonsdale. Vulliamy was a man of considerable ingenuity, and introduced several peculiarities and improvements into his clocks.[3]

Vulliamy was elected associate of the Institution of Civil Engineers on 13 March 1838, was auditor for the year 1842, and obtained in 1846 a premium of books for a paper on railway clocks. He was made free of the Clockmakers' Company on 4 Dec. 1809, admitted to the livery in January 1810, and five times filled the office of master. He was elected a fellow of the Royal Astronomical Society on 14 Jan. 1831, and retained his connection with the society till his death.[3]

Vulliamy was a man of refined taste in art, and possessed no small knowledge of architecture, paintings, and engravings. His library was extensive and well chosen, especially in that portion which related to his profession, and he possessed a valuable collection of ancient watches.[4] He enriched the libraries of the Clockmakers' Company and of the Institution of Civil Engineers. To the company he also gave numerous models and specimens of clocks and watches, and to the institution he presented in 1847 the works of a clock made by Thomas Tompion about 1670 for Charles II, by whom it was given to Barbara Palmer, 1st Duchess of Cleveland. On 1 March 1850 he exhibited to the Royal Archæological Institute six carvings in ivory by Fiamminge. He died on 8 January 1854, leaving two sons, Benjamin Lewis (1817–1886) and George John.[3]

Vulliamy wrote an account of the Stockton motion in English repeaters for the article Watch in Rees's Cyclopædia.[3]