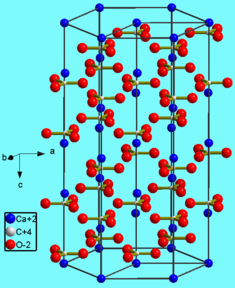 Calcite is a carbonate mineral and the most stable polymorph of calcium carbonate (CaCO3). The other polymorphs are the minerals aragonite and vaterite. Aragonite will change to calcite at 380–470 °C,[5] and vaterite is even less stable.

Calcite crystals are trigonal-rhombohedral, though actual calcite rhombohedra are rare as natural crystals. However, they show a remarkable variety of habits including acute to obtuse rhombohedra, tabular forms, prisms, or various scalenohedra. Calcite exhibits several twinning types adding to the variety of observed forms. It may occur as fibrous, granular, lamellar, or compact. Cleavage is usually in three directions parallel to the rhombohedron form. Its fracture is conchoidal, but difficult to obtain.

It has a defining Mohs hardness of 3, a specific gravity of 2.71, and its luster is vitreous in crystallized varieties. Color is white or none, though shades of gray, red, orange, yellow, green, blue, violet, brown, or even black can occur when the mineral is charged with impurities.

Calcite, like most carbonates, will dissolve with most forms of acid. Calcite can be either dissolved by groundwater or precipitated by groundwater, depending on several factors including the water temperature, pH, and dissolved ion concentrations. Although calcite is fairly insoluble in cold water, acidity can cause dissolution of calcite and release of carbon dioxide gas. Ambient carbon dioxide, due to its acidity, has a slight solubilizing effect on calcite. Calcite exhibits an unusual characteristic called retrograde solubility in which it becomes less soluble in water as the temperature increases. When conditions are right for precipitation, calcite forms mineral coatings that cement the existing rock grains together or it can fill fractures. When conditions are right for dissolution, the removal of calcite can dramatically increase the porosity and permeability of the rock, and if it continues for a long period of time may result in the formation of caves. On a landscape scale, continued dissolution of calcium carbonate-rich rocks can lead to the expansion and eventual collapse of cave systems, resulting in various forms of karst topography.

High-grade optical calcite was used in World War II for gun sights, specifically in bomb sights and anti-aircraft weaponry.[8] Also, experiments have been conducted to use calcite for a cloak of invisibility.[9] Microbiologically precipitated calcite has a wide range of applications, such as soil remediation, soil stabilization and concrete repair.

Calcite is the primary mineral in metamorphic marble. It also occurs as a vein mineral in deposits from hot springs, and it occurs in caverns as stalactites and stalagmites.

Lublinite is a fibrous, efflorescent form of calcite.[12]

Calcite may also be found in volcanic or mantle-derived rocks such as carbonatites, kimberlites, or rarely in peridotites.

Calcite is often the primary constituent of the shells of marine organisms, e.g., plankton (such as coccoliths and planktic foraminifera), the hard parts of red algae, some sponges, brachiopods, echinoderms, some serpulids, most bryozoa, and parts of the shells of some bivalves (such as oysters and rudists). Calcite is found in spectacular form in the Snowy River Cave of New Mexico as mentioned above, where microorganisms are credited with natural formations. Trilobites, which became extinct a quarter billion years ago, had unique compound eyes that used clear calcite crystals to form the lenses.[13]

Calcite forms from a poorly ordered precursor (amorphous calcium carbonate, ACC).[14] The crystallization process occurs in two stages; firstly, the ACC nanoparticles rapidly dehydrate and crystallize to form individual particles of vaterite; secondly, the vaterite transforms to calcite via a dissolution and reprecipitation mechanism with the reaction rate controlled by the surface area of calcite.[15] The second stage of the reaction is approximately 10 times slower than the ﬁrst. However, the crystallization of calcite has been observed to be dependent on the starting pH and presence of Mg in solution.[16] A neutral starting pH during mixing promotes the direct transformation of ACC into calcite. Conversely, when ACC forms in a solution that starts with a basic initial pH, the transformation to calcite occurs via metastable vaterite, which forms via a spherulitic growth mechanism.[17] In a second stage this vaterite transforms to calcite via a surface-controlled dissolution and recrystallization mechanism. Mg has a noteworthy effect on both the stability of ACC and its transformation to crystalline CaCO3, resulting in the formation of calcite directly from ACC, as this ion unstabilizes the structure of vaterite.

Calcite may form in the subsurface in response to activity of microorganisms, such as during sulfate dependent anaerobic oxidation of methane, where methane is oxidized and sulfate is reduced by a consortium of methane oxidizers and sulfate reducers, leading to precipitation of calcite and pyrite from the produced bicarbonate and sulfide. These processes can be traced by the specific carbon isotope composition of the calcites, which are extremely depleted in the 13C isotope, by as much as −125 per mil PDB (δ13C).[18]

Calcite seas existed in Earth history when the primary inorganic precipitate of calcium carbonate in marine waters was low-magnesium calcite (lmc), as opposed to the aragonite and high-magnesium calcite (hmc) precipitated today. Calcite seas alternated with aragonite seas over the Phanerozoic, being most prominent in the Ordovician and Jurassic. Lineages evolved to use whichever morph of calcium carbonate was favourable in the ocean at the time they became mineralised, and retained this mineralogy for the remainder of their evolutionary history.[19] Petrographic evidence for these calcite sea conditions consists of calcitic ooids, lmc cements, hardgrounds, and rapid early seafloor aragonite dissolution.[20] The evolution of marine organisms with calcium carbonate shells may have been affected by the calcite and aragonite sea cycle.[21]