From Infogalactic: the planetary knowledge core
Jump to: navigation, search
For other uses, see Caliban (disambiguation).

Caliban (/ˈkælᵻbæn/ KAL-ə-ban) is one of the main antagonists in William Shakespeare's play The Tempest. He is the subhuman son of the malevolent witch, Sycorax.

After his island becomes occupied by Prospero and his daughter Miranda, Caliban is forced into servitude. While he is referred to as a calvaluna or mooncalf, a freckled monster, he is the only human inhabitant of the island that is otherwise "not honour'd with a human shape" (Prospero, I.2.283). In some traditions he is depicted as: a wild man, or a deformed man, or a beast man, or sometimes a mix of fish and man. Caliban is a Cambion, the half-human son of Sycorax by (according to Prospero, though this is not confirmed) a devil. Banished from Algiers, Sycorax was left on the isle, pregnant with Caliban, and died before Prospero's arrival. Caliban, despite his inhuman nature, clearly loved and worshipped his mother, and refers to Setebos as his mother's god. Prospero explains his harsh treatment of Caliban by claiming that after initially befriending him, Caliban attempted to rape Miranda. Caliban confirms this gleefully, saying that if he had not been stopped he would have peopled the island with a race of Calibans—"Thou didst prevent me, I had peopled else this isle with Calibans" (Act I:ii). Prospero then entraps Caliban and torments him with harmful magic if Caliban does not obey his orders. Resentful of Prospero, Caliban takes Stephano, one of the shipwrecked servants, as a god and as his new master. Caliban learns that Stephano is neither a god nor Prospero's equal in the conclusion of the play, however, and Caliban agrees to obey Prospero again.

Despite this portrayal, Caliban also has moments in which he delivers memorable speeches, such as in Act 3, Scene 2:

Be not afeard; the isle is full of noises,
Sounds, and sweet airs, that give delight and hurt not.(not hurt)
Sometimes a thousand twangling instruments
Will hum about mine ears; and sometime voices
That, if I then had waked after long sleep,
Will make me sleep again; and then in dreaming,
The clouds methought would open, and show riches
Ready to drop upon me, that when I waked
I cried to dream again. 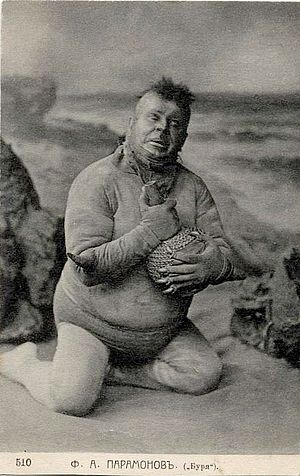 Fyodor Paramonov as Caliban in The Tempest, Maly Theatre (Moscow), 1905

In the 1956 science fiction film Forbidden Planet, Caliban is re-imagined as "the Monster from the Id", a wild and violent monster that is invisible to the naked eye. The monster later turns out to be born of the subconscious of the film's Prospero character, Dr. Morbius, using the advanced technology of the Krell. Like Caliban, the monster ultimately rebels and attempts to kill its master. Captain Adams confronts Dr. Morbius with the fact that he is giving form to his subconscious, and his guilty conscience, from having brought it into existence, finally ends the monster's destructive rampage.

Caliban is the protagonist of Aimé Césaire's 1969 play A Tempest, in which he is a black slave in rebellion against his white master Prospero.

In the Swedish 1989 film The Journey to Melonia, an animated film loosely inspired by The Tempest, there is a character named Caliban, a creature whose face consists of mainly vegetables. Unlike Caliban in The Tempest, this Caliban is kind at heart, and even becomes a hero later in the film.

In The League of Extraordinary Gentlemen, Caliban appears as part of Prospero's Men, the first incarnation of the League, alongside his master, and Ariel.

A character called Caliban appears in various stories in Marvel Comics X-Men franchise. This version is a sewer-dwelling, simple-minded mutant who first appears along other abnormal-looking mutants called Morlocks. Caliban straddles the line between good and evil until he heroically sacrifices himself during the "X-Men: Messiah Complex" storyline.

Tad Williams' 1997 novel Caliban's Hour (US: HarperCollins, ISBN 978-0-06-105413-6 and UK: Legend Books, ISBN 0-09-926361-0) takes place 20 years after the events of The Tempest. Abandoned on the island by Prospero and Miranda, Caliban manages to escape and make his way to Milan with the intention of avenging himself on Prospero, only to learn that Prospero has died. He then travels to Naples and one night gains entry to Miranda's chamber, where he forces her to listen to his story and make her understand what she and her father have done to him.

In Fantasy Island, the modern reimagining of the original TV series, Caliban appears as Cal, who begins the series as the island's bellhop. He was also shown to have various other duties such as bartender, waiter, cook, and even helicopter pilot. In his former life, he was a small-time criminal but earned a chance to revert to the age of 10 and start a new life near the end of the season.

Adrian Herrero danced Caliban in the choreographic adaptation of The Tempest (La Tempestad) by the Ballet Contemporáneo of the Teatro General San Martín in Buenos Aires, Argentina, in 2008.

In the 2010 film adaptation, Caliban is portrayed by Djimon Hounsou.

In the 2010 film The King's Speech, Lionel Logue (Geoffrey Rush) recites Caliban's famous speech from Act 3, Scene 2, to amuse and educate his children.

Oscar Wilde refers to Caliban in the preface of his novel The Picture of Dorian Gray.

In Games Workshop's Warhammer 40,000 setting, Caliban is the homeworld of the Dark Angels Legion, which was later destroyed during a civil war between factions within the legion, resulting in the destruction of the planet,

A monster from the 2007 video game Silent Hill: Origins is named after and inspired by Caliban. Also, at a certain point of the game, protagonist Travis Grady can hear Caliban's famous monologue after obtaining a certain key while exploring the theater level.

In the 1844 preface to his main work, World as Will and Representation, the philosopher Schopenhauer refers to Hegel as a "spiritual Caliban".

In the 1965 movie Doctor Zhivago, during the scene where Victor Komarovsky convinces Zhivago to allow him to rescue Lara by taking her to Vladivostok, Komarovsky refers to himself as a Caliban: "Do you accept the protection of this ignoble Caliban on any terms that Caliban cares to make?"

Caliban is featured as an antagonist in Dan Simmons' Ilium/Olympos duology.

In John Fowles's 1963 novel The Collector, Miranda refers to her kidnapper as Caliban.

Rob Thurman's Cal Leandros series centers around Caliban "Cal" Leandros, a half-human, half-Auphe (a nightmarish monster) hybrid who kills monsters for fun and cash in NYC with his human brother and their sleazy cohort, car-salesman Robin Goodfellow. This Cal struggles for control every day against his monster half, dealing with sarcasm and dark humor.

In the 1981 film version of Clash of the Titans, the son of the goddess Thetis is named Calibos (spelled "Kalibos" in the film's novelization). He is a human changed into a monstrous-looking satyr-like creature by Zeus as punishment for having killed several of Zeus's winged horses, leaving Pegasus the only survivor.

In Caliban's Redemption, a collection of prose-poetry by David W. Parry, Caliban is Developed as a heathen character, representing magical freedom and the inspiration, found through a free imagination.

The 2012 Summer Olympics opening ceremony (directed by Danny Boyle) titled Isles of Wonder (a name inspired by The Tempest) was heavily influenced by The Tempest. The musical piece played during the torch lighting ceremony was entitled "Caliban's Dream", and Caliban's monologue from Act 3, Scene ii was quoted by Kenneth Branagh in character as Isambard Kingdom Brunel at the start of the Industrial Revolution set piece. "And I Will Kiss", the title of another specially commissioned track from the ceremony, is also a quote from The Tempest (2:2:148-149). These two songs also appeared on the ceremony's official soundtrack. The 2012 Summer Olympics closing ceremony also featured a recitation of the same monologue, this time by Timothy Spall playing Winston Churchill.

In the Showtime television series Penny Dreadful, Victor Frankenstein's first creation/monster takes the name of Caliban after being hired as a stage hand in a London theatre.

Episode 6 of Season 1 of the 2014 Constantine (TV series) is called The rage of caliban.

"The Child Caliban" is the opening chapter of Thomas Wolfe's novel The Web and the Rock.

In the Cradle of Filth song "The Byronic Man", the artist uses the lines "they call me bad; mad Caliban with manners, dangerous to know a passing fad".[1] 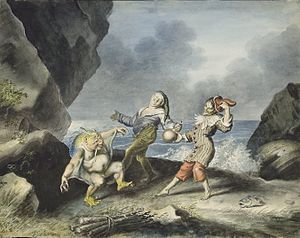 There is a long history of enthusiastic speculation on the name's origin or derivation.

One of the most prominent suggestions concerns Caliban being an anagram of the Spanish word canibal (Carib people), the source of cannibal in English. The character may be seen as a satire on "Noble cannibal" from Montaigne's Essays (A.30, "Of Cannibals").[2]

Also popular has been comparison to kaliban or cauliban in the Romani language, which mean black or with blackness.[3] The first gypsies had arrived in England a century before Shakespeare's time.[4]

Many other, though less notable, suggestions have been made, primarily in the 19th century, including an African town Calibia, an Arabic word for "vile dog", a Hindu Kalee-ban "satyr of Kalee, the Hindoo Proserpine", German kabliau ("codfish"), etc.[5]