Cambridgeshire County Council is the county council of Cambridgeshire, England. The council consists of 69 councillors, representing 60 electoral divisions. Since the 2013 local elections, no party has overall control of the council, with the Conservative group running a minority administration . The council meets at Shire Hall in Cambridge. It is a member of the East of England Local Government Association.

This arrangement lasted until 1974 when, following the Local Government Act 1972, Cambridgeshire and Isle of Ely was merged with Huntingdon and Peterborough to form a new non-metropolitan county of Cambridgeshire under the control of a newly constituted Cambridgeshire County Council. The first elections to the new authority were in April 1973, and the council took office on 1 April 1974.

The council consists of 69 councillors, elected to four year terms, representing 60 electoral divisions. The Conservative Party is the largest party represented on the council, but lost overall control at the 2013 election.

At the first meeting since the 2013 election, a motion from the Liberal Democrat group[1] was passed[2] committing the Council to change its Governance model to the "Committee System" from May 2014. The first draft of the constitutional changes recently went to the Council's Resources and Performance Overview & Scrutiny Committee.[3] 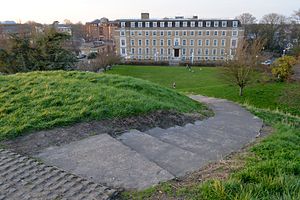 The coat of arms were granted on 1 November 1976. The blazon reads: "Or three Palets wavy alternating with two Palets Azure a Bordure Gules flory on the inner edge Or; the Shield ensigned by a Mural Crown Or." The motto is 'CORDE UNO SAPIENTES SIMUS' which translates as "With one heart let us be men and women of understanding".[6]