Cameron is a census-designated place (CDP) in and the parish seat of Cameron Parish, Louisiana, United States.[1] It is part of the Lake Charles Metropolitan Statistical Area. After sustaining extreme damage from Hurricane Rita in 2005 and Hurricane Ike in 2008, the 2010 Census showed Cameron having a population of just 406, a 79% drop in population between the years 2000 and 2010.[2] 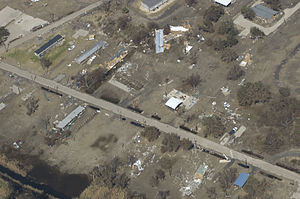 Nearly fifty years later, in late September 2005, Hurricane Rita hit the town. This time, however, virtually everyone evacuated, and only one man was reported killed in the town. He is said to have been sick and decided to stay in town for the storm. His body was found in Lake Charles, 52 miles inland.[4]

On September 14, 2008, Hurricane Ike again leveled Cameron with a 22-foot (6.7 m) storm surge just as the town was recovering from Rita in 2005. Ike destroyed over 90 percent of the homes in the parish seat and caused catastrophic flooding in every part of the parish. Damage due to storm surge and winds was far worse than what was seen with Hurricane Rita.[5] A 2010 report on the damage sustained from the effects of Rita and Ike stated that few people returned to the town after the hurricanes, due to stricter building codes and high insurance costs that increased the cost of living dramatically. None of the stores have been rebuilt; only a gas station, bank, post office, and a restaurant remain (the latter two of which are still housed in trailers). Most of the residents still live in mobile homes. The First Baptist Church in the community was rebuilt in 2010.[6]

Cameron is on the Creole Nature Trail, a National Scenic Byway.

Cameron is home to the Louisiana Fur and Wildlife Festival held in January. 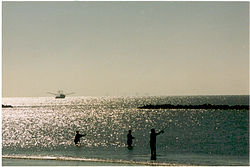 Shrimping and fishing in the Gulf

Damage in Cameron from Hurricane Rita (photo taken in April 2006)

There were 695 households out of which 37.8% had children under the age of 18 living with them, 52.5% were married couples living together, 14.5% had a female householder with no husband present, and 26.6% were non-families. 21.2% of all households were made up of individuals and 6.3% had someone living alone who was 65 years of age or older. The average household size was 2.77 and the average family size was 3.17.

Two years later, in September 2008, Hurricane Ike came ashore and brought a 22-foot (6.7 m) storm surge, which was far worse than Rita's 10-foot (3.0 m) surge.[15] All of the coastline in the area was flooded heavily, with surge and floodwaters reaching 60 miles (97 km) inland, as far north as Lake Charles.[16][17] In Cameron Parish the communities of Holly Beach, Hackberry, Creole, Grand Chenier, and Cameron itself were essentially destroyed.[5] Hundreds of people had to be rescued from atop rooftops, including 363 people who were rescued by Louisiana Department of Wildlife and Fisheries Search and Rescue teams in conjunction with the Louisiana National Guard and the U.S. Coast Guard.[5][18] Ike caused varying degrees of damage to every school and library in Cameron Parish and surrounding parishes. Most were heavily flooded by storm surge and moderately damaged by winds, and as a result all schools were closed and a slow recovery process began.[19]