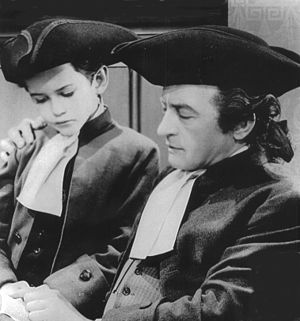 A character actor is a supporting actor who plays unusual, interesting, or eccentric characters.[2][3][4][5][6][7] The term, often contrasted with that of leading actor, is somewhat abstract and open to interpretation:[8] in a general sense, all actors can be considered as character actors since they all play "characters",[9] but the usual sense is an actor who plays a distinctive and important supporting role.[1][10] Sometimes it describes an actor who plays characters who are very different from themselves, while in another sense it describes an actor who specializes in minor roles. In either case, character actor roles are more substantial than bit parts or non-speaking extras. The term is used primarily to describe television and film actors, and is less used to describe theater actors.[11] An early use of the term was in the 1883 edition of The Stage, which defined a character actor as "one who portrays individualities and eccentricities."[12] Actors with a long career history of playing character roles are difficult for audiences to recognize as being the same actor, since they play such roles so convincingly and memorably.[7] 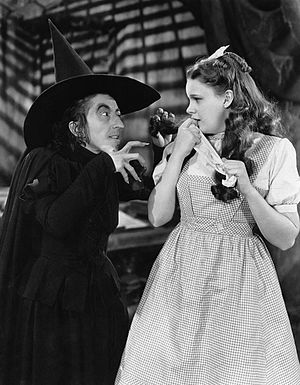 Character actor Margaret Hamilton (left) in real life was a "sweet, gentle woman" who even taught kindergarten prior to working on Broadway and Hollywood, which was radically different from her scary on-screen persona of the Wicked Witch in the famous 1939 film.[13]

Unlike leading actors,[7][9][14] they are generally seen as less glamorous.[6] While a leading actor often has physical beauty needed to play the love interest,[15] a character actor may be short or tall, heavy or thin, balding, older, or simply unconventional-looking and distinctive in some physical way. For example, the face of Chicago character actor William Schutz was disfigured in a car accident when he was five years old, but his appearance despite reconstructive surgery helped him to be memorable and distinctive to theater audiences.[16] Generally, the names of character actors are not featured prominently in movie and television advertising on the marquee, since a character actor's name is not expected to attract film audiences.[17] The roles that character actors play in film or television are often identified by only one name, such as "Officer Fred", while roles of leading actors often have a full name, such as "Captain Jack Sparrow".[11] Some character actors have distinctive voices or accents, or they develop memorable mannerisms. A character actor with a long career may not have a well-known name, yet may be instantly recognizable.[18]

During the course of an acting career, an actor can sometimes shift between leading roles and secondary roles.[15] Some leading actors, as they get older, find that access to leading roles is limited by their increasing age. In the past, actors of color, who were often barred from roles for which they were otherwise suited, found work performing ethnic stereotypes. Sometimes character actors have developed careers based on specific talents needed in genre films, such as dancing, horsemanship, acrobatics, swimming ability, or boxing.[19] Many up-and-coming actors find themselves typecast in character roles due to an early success with a particular part or in a certain genre, such that the actor becomes so strongly identified with a particular type of role that casting directors steer the actor to similar roles. Some character actors play essentially the same character over and over, as with Andy Devine's humorous but resourceful sidekick, while other actors, such as Sir Laurence Olivier, have the capacity of submerging themselves in any role they play. Some character actors develop a cult following with a particular audience, such as with the fans of Star Trek or The Rocky Horror Picture Show.

Character actors tend to play the same type of role throughout their careers,[1] including Harvey Keitel as a "tough and determined guy", Dame Maggie Smith as an "upstanding lady matriarch",[20] Christopher Lloyd as an eccentric, Claude Rains as a "sophisticated, sometimes ambiguously moral man", Abe Vigoda as a "leathery, sunken-eyed" and tired hoodlum on the verge of retirement,[21] and Forest Whitaker as a "calm, composed character with an edge and potential to explode".[1] Ed Lauter usually portrayed a menacing figure because of his "long, angular face" which was easily recognized in public, although audiences rarely knew his name.[22] Character actors can play a variety of types, such as the femme fatale, gunslinger, sidekick, town drunk, villain, whore with a heart of gold, and many others. A character actor's roles are often perceived as being substantially different from their perceived real-life persona, meaning that they do not portray an extension of themselves, but rather a character substantially different from their off-screen persona.[6] Character actors subsume themselves into the characters they portray, such that their off-screen acting persona is practically unrecognizable.[6] According to one view, great character actors are rarely out of work, and often have long careers that span decades.[6] They are also often highly regarded by fellow actors.[23]