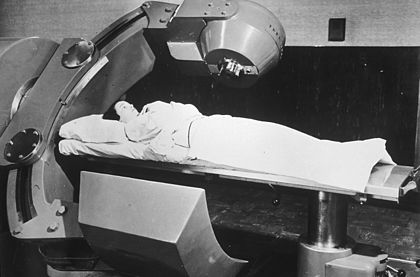 Patient receiving cobalt-60 therapy in an early teletherapy machine, probably early 1950s. The cobalt is in the radiation head (top center), which produces a beam of gamma rays which penetrate the patient's body and strike the tumor. Radiation passing through the patient is absorbed by the lead shield opposite. During therapy, the head unit rotates slowly around the patient to reduce the radiation dose to healthy tissue.

Cobalt therapy or cobalt-60 therapy is the medical use of gamma rays from the radioisotope cobalt-60 to treat conditions such as cancer. Beginning in the 1950s cobalt-60 was widely used in external beam radiotherapy (teletherapy) machines, which produced a beam of gamma rays which was directed into the patient's body to kill tumor tissue. Because these "cobalt machines" were expensive and required specialist support they were often housed in cobalt units. Cobalt therapy was a revolutionary advance in radiotherapy in the post-World War 2 period but is now being replaced by other technologies such as linear accelerators.

Before the development of medical linear accelerators in the 1970s, the only artificial radiation source used for teletherapy was the x-ray tube. Researchers found ordinary x-ray tubes, which used voltages of 50-150 kV, could treat superficial tumors, but did not have the energy to reach tumors deep in the body. To have the penetrating ability to reach deep-seated tumors without subjecting healthy tissue to dangerous radiation doses required rays with energy around 1 MeV, called "megavolt" radiation. To produce a significant amount of megavolt x-rays required potentials on the tube of 3-5 million volts (3-5 megavolts), necessitating huge, expensive x-ray machines. By the late 30s these were being built, but they were available at only a few hospitals. 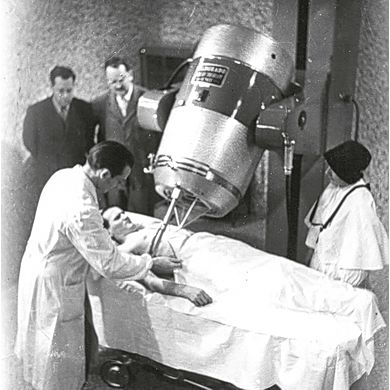 The first cobalt machine in Italy, installed in Borgo Valsugana in 1953.

Radioisotopes produced gamma rays in the megavolt range, but prior to World War 2 virtually the only radioisotope available for radiotherapy was naturally-occurring radium (producing 1-2 MeV gamma rays), which was extremely expensive due to its low occurrence in ores. In 1937 the total worldwide supply of radium available for beam radiotherapy (teletherapy) was 50 grams, valued at $50 million in 2005 dollars.

The invention of the nuclear reactor in the Manhattan Project during the World War 2 made possible the creation of artificial radioisotopes for radiotherapy. Cobalt-60, produced by irradiating ordinary cobalt metal in a reactor, is a high activity gamma ray emitter, emitting 1.17 and 1.33 MeV gamma rays with an activity of 44 TBq/g (about 1100 Ci/g). The main reason for its wide use in radiotherapy is that it has a longer half-life, 5.27 years, than many other gamma emitters. However the half life still requires cobalt sources to be replaced about every 5 years.

In 1949, Dr. Harold E. Johns of the University of Saskatchewan sent a request to the National Research Council (NRC) of Canada asking them to produce cobalt-60 isotopes for use in a cobalt therapy unit prototype. Two cobalt-60 apparatuses were then built, one in Saskatoon in the cancer wing of the University of Saskatchewan and the other in London, Ontario. Dr. Johns collected depth-dose data at the University of Saskatchewan which would later become the world standard.[1] The first patient to be treated with cobalt-60 radiation was treated on October 27, 1951, at Victoria Hospital in London, Ontario.[2] In 1961 cobalt therapy was expected to replace X-ray radiotherapy.[3] The role of the cobalt unit has partly been replaced by the linear accelerator, which can generate higher-energy radiation, and does not produce the radioactive waste that radioisotopes do with their attendant disposal problems. Cobalt treatment still has a useful role to play in certain applications and is still in widespread use worldwide, since the machinery is relatively reliable and simple to maintain compared to the modern linear accelerator.

As used in radiotherapy, cobalt units produce stable, dichromatic beams of 1.17 and 1.33 MeV, resulting in an average beam energy of 1.25 MeV. The cobalt-60 isotope has a half-life of 5.3 years so the cobalt-60 needs to be replaced occasionally.