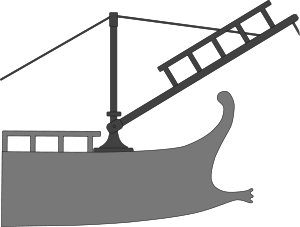 The corvus (meaning "crow" or "raven" in Latin) or harpago (probably the correct ancient name[1]) was a Roman military boarding device used in naval warfare during the First Punic War against Carthage.

In Chapters 1.22-4-11 of his History, Polybius describes this device as a bridge 1.2 m (4 ft) wide and 10.9 m (36 ft) long, with a small parapet on both sides. The engine was probably used in the prow of the ship, where a pole and a system of pulleys allowed the bridge to be raised and lowered. There was a heavy spike shaped as a bird's beak on the underside of the device. The spike was designed to pierce the enemy ship's deck when the boarding-bridge was lowered. This allowed a firm grip between the vessels and a route for the legionaries to cross to the other ship.

In the 3rd century BC, Rome was not a naval power, and had little or no experience in war at sea. Before the First Punic War, the Roman Republic had not campaigned outside the Italian Peninsula. The Republic's military strength was on land, and her greatest assets were the discipline and courage of her soldiers. The boarding-bridge allowed her to use her marines against the superior Carthaginian naval skills. The Romans' application of boarding tactics worked; they won several battles, most notably those of Mylae, Sulci, Tyndaris, and Ecnomus.

Despite its advantages, the boarding bridge had a serious drawback: it could not be used in rough seas since the stable connection of two working ships endangered each other's structure. Operating in rough seas, the device became useless and was abandoned.[2] According to Bonebaker, Professor of Naval Architecture at Delft, with the estimated weight of one ton for the boarding bridge, it is "most probable that the stability of a quinquereme with a displacement of about 250 m3 (330 cu yd) would not be seriously upset".[2]

Some other historians[who?] believe that its weight on the prow compromised the ship's navigability and the Romans lost almost two entire fleets to storms in 255 and in 249 BC, largely due to the instability caused by the device. These losses were probably the main reason for the abandonment of the boarding-bridge in ship design by the end of the war. As Roman naval tactics improved and the Roman crews became more experienced, the boarding-bridge was no longer used in battle. It is not mentioned in period sources after the battle of Ecnomus and apparently the Battle of the Aegates Islands that decided the first Punic war was won without it.

A variant of the boarding bridge, called arpax or harpax, was used in the Battle of Naulochus.

The design of the corvus has been undergone many transformations throughout history. The earliest suggested modern interpretation of the corvus came in 1649 by German classicist Johann Freinsheim. Freinsheim suggested that the bridge consisted of two parts, one section measuring twenty-four feet and the second being twelve feet long. The twenty-four foot section was placed along the prow mast and a hinge connected the smaller twelve-foot piece to the mast at the top. This smaller piece would have been the actual gangway as it could swing up and down, and the pestle was attached to the end.[3]

Classical scholar and German statesman B.G. Niebuhr ventured to improve the interpretation of the corvus and proposed that the two parts of Freinsheim’s corvus simply needed to be swapped. By applying the twelve-foot side along the prow mast, the twenty-four foot side could be lowered onto an enemy ship by means of the pulley.[4]

German scholar K.F. Haltaus hypothesized that the corvus was a thirty-six foot long bridge with the near end braced against the mast via a small oblong notch in the near end that extended twelve-feet into the bridge. Haltaus suggested that a lever through the prow mast would have allowed the crew to turn the corvus by turning the mast. A pulley was placed on the top of a twenty-four foot mast that raised the bridge in order to use the device.[5]

German classical scholar Wilhelm Ihne proposed another version of corvus that resembled Freinsheim’s crane with adjustments in the lengths of the sections of the bridge. His design placed the corvus twelve feet above the deck and had the corvus extend out from the mast a full thirty-six feet with the base of the near end connected to the mast. The marines on deck would then be forced to climb a twelve-foot ladder to access to the corvus.[6]

French scholar Emile de St. Denis suggested the corvus featured a thirty-six foot bridge with the mast hole set twelve feet from the near end. The design suggested by de St. Denis, however, did not include an oblong hole and forced the bridge to travel up and down the mast completely perpendicular to the deck at all times.[7]

The next step in this direction occurred in 1956, when historian H.T. Wallinga published his dissertation, “The Boarding-Bridge of the Romans.” It suggested a different full-beam design for the corvus, which became the most widely accepted model among scholars for the rest of the twentieth century. Wallinga’s design included the oblong notch in the deck of the bridge to allow it to rise at an angle by the pulley mounted on the top of the mast.[8]