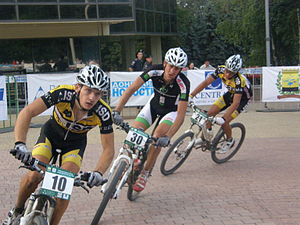 A cycling team is a group of cyclists who join a team or are acquired and train together to compete in bicycle races whether amateur or professional - and the supporting personnel. Cycling teams are most important in road bicycle racing, which is a team sport, but collaboration between team members is also important in track cycling and cyclo-cross.

While riders form the core of a team, a top team also has personnel who support the racing and training. These include

There are also officers for sponsorship, marketing, and communication.

There are different levels of commitment between the riders and the team. Amateur teams range from a collection of riders who identify themselves as a team to those that provide riders with equipment and money. A top-level professional team is registered with the Union Cycliste Internationale, which enforces rules and a points system for professional competition.

Team members have different specializations. Climbing specialists grind away on hard inclines; sprinters save their energy for sprints for points and position; time trialists keep speed high over great distances; and domestiques guard the team from rivals and carry food and drink to their leaders.

The leaders of teams are called captains. The rest of the team supports and helps the captain, however anyone on the team may be allowed to try to win. The captains have the most media exposure and best chance of winning.

In one day races, one or several leaders are chosen according to demands of the race. In stage races, teams focus on different goals. For example, during the 2005 Tour de France teams such as Discovery Channel or T-Mobile focused on the general classification while other teams tried to win stages or one of the other classifications. In the 2004 Tour de France, Quick-Step–Davitamon helped Richard Virenque win the polka dot jersey while Lotto–Domo helped Robbie McEwen win the green jersey. Smaller teams may simply get riders into a long breakaway to get coverage on television. Most professional teams have 10-20 riders.

Teams are generally sponsored in exchange for advertising on clothing and other endorsements. Sponsorship ranges from small businesses to international companies.

The Tour de France between 1930 and the late 1950s was for national teams which carried no prominent commercial advertising.