Dīn (دين, also anglicized as Deen) is a Persian word, commonly associated with Zoroastrianism and Islam, but it is also used in Sikhism and Arab Christian worship. The term is loosely associated with religion, but in the Qur'an, it means the way of life in which righteous Muslims must adopt to comply with divine law (Quran and sunnah), or Shari'a, and to the divine judgment or recompense to which all humanity must inevitably face without intercessors before God.[1] Thus, although secular Muslims[who?] would say that their practical interpretation of Dīn conforms to "religion" in the restricted sense of something that can be carried out in separation from other areas of life, both mainstream and reformist Muslim writers take the word to mean an all-encompassing way of life carried out under the auspices of God's divine purpose as expressed in the Qur'an and hadith. As one notably progressive Muslim writer puts it, far from being a discrete aspect of life carried out in the mosque, "Islam is Dīn, a complete way of life".[2]

How the term Dīn came to be used in Islamic Arabia is uncertain, but its use in modern Persian may derive from the Zoroastrian concept of Daena, as it is called in the ancient Eastern Iranian Avestan language, which represents "insight" and "revelation", and from this "conscience" and "religion". Daena is the Eternal Law, which was revealed to humanity through the Mathra-Spenta ("Holy Words"). Alternatively, the Hebrew term "דין", transliterated as "dīn", means either "law" or "judgement". In the Kabbalah of Judaism, the term can, alongside "Gevurah" (cognate to the Arabic "Jabaarah"), refer to "power" and "judgement".[3] It may be the root of the common Semitic word Madīnah (city), and of Madyan, a geographical place and a people mentioned in the Bible and in the Qur'an. Thus, Dīn does not simply mean "religion" or "faith", but refers to "Governance".

Dīn as used in Islam 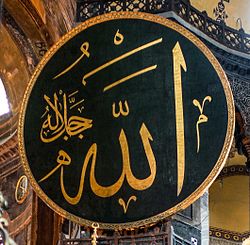 Inscription of Allah in the Hagia Sophia.

It has been said that the word Dīn appears in as many as 79 verses in the Qur'an,[4] but because there is no exact English translation of the term, its precise definition has been the subject of some misunderstanding and disagreement. For instance, the term is often translated in parts of the Qur'an as "religion".[5] However, in the Qur'an itself, the act of submission to God is always referred to as Dīn rather than as Madhhab (مذهب), which is the Arabic word for "religion"[citation needed].

Some Qur'anic scholars have translated Dīn in places as "faith"[6] Others suggest that the term "has been used in various forms and meanings, e.g., system, power, supremacy, ascendancy, sovereignty or lordship, dominion, law, constitution, mastery, government, realm, decision, definite outcome, reward and punishment. On the other hand, this word is also used in the sense of obedience, submission and allegiance".[7]

In addition to the two broad usages referred to so far, of sovereignty on the one hand and submission on the other, others have noted[8] that the term Dīn is also widely used in translations of the Qur'an in a third sense. Most famously in its opening chapter, al-Fātiḥah, the term is translated in almost all English translations as "judgment":

The well-known Islamic scholar, Fazlur Rahman Malik, suggested that Dīn is best considered as "the way-to-be-followed". In that interpretation, Dīn is the exact correlate of Shari'a: "whereas Shari'a is the ordaining of the Way and its proper subject is God, Dīn is the following of that Way, and its subject is man".[9] Thus, "if we abstract from the Divine and the human points of reference, Shari'a and Dīn would be identical as far as the 'Way' and its content are concerned".[10]

In many hadith, the din has been described as a midway lifestyle:

Narrated Abu Huraira, the Prophet said, "Religion (Dīn) is very easy and whoever overburdens himself in his religion will not be able to continue in that way. So you should not be extremists, but try to be near to perfection and receive the good tidings that you will be rewarded; and gain strength by worshipping in the mornings, the nights."

Dīn as used in Judaism

In Judaism, the word Dīn (Hebrew: דִּין) appears in the Tanakh (the Hebrew Bible), which occurs 24 times. It often means "to judge", "execute judgment" and "to vindicate". The intransitive usage of the verb loosely means "to be obedient, submissive". The transitive verb usage denotes "requite, compensate, rule, govern, obedience, abasement, recompense, requiter, governor".