From Infogalactic: the planetary knowledge core
Jump to: navigation, search
Not to be confused with Earl of Stafford. 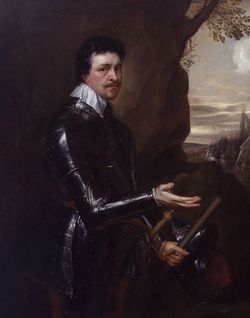 Thomas Wentworth, 1st Earl of Strafford (of the first creation)

Earl of Strafford is a title that has been created three times in English and British history.

The first creation was in the Peerage of England in 1640 for Thomas Wentworth, the close advisor of King Charles I. He had already succeeded his father as second Baronet of Wentworth Woodhouse in 1614. The Wentworth Baronetcy, of Wentworth Woodhouse in the County of York, had been created in the Baronetage of England on 20 June 1611 for Thomas's father, William Wentworth.[1] Thomas was created Baron Wentworth, of Wentworth-Woodhouse, Baron of Newmarch and Oversley, in 1628, and Viscount Wentworth in 1629. He was made Baron Raby in 1640, at the same time he was given the earldom. In 1641 he was attainted. His son, William, successfully had the attainder reversed in 1662, becoming the second earl, but died without heirs in 1695 when the barony of Wentworth, viscountcy and earldom became extinct. He was succeeded in the barony of Raby according to a special remainder by his first cousin once removed, Thomas Wentworth, who became the third Baron. He was the grandson of Sir William Wentworth, younger brother of the first Earl of the 1640 creation. While gaining the barony, he did not receive the Woodhouse estate, which was inherited by Thomas Watson, thereafter a source of rivalry between the two men.

In 1711 the earldom was recreated when the 3rd baron Raby was created Viscount Wentworth and Earl of Strafford in the Peerage of Great Britain. He was succeeded in 1739 by his son, William, the second earl. William had no issue and on his death in 1791 was succeeded by his cousin Frederick. as he also had no successors, all titles became extinct on his death in 1799.

The title was created for a third time in 1847 in the Peerage of the United Kingdom, when the prominent soldier John Byng, 1st Baron Strafford, was made Viscount Enfield, of Enfield in the County of Middlesex, and Earl of Strafford. He had already been created Baron Strafford, of Harmondsworth in the County of Middlesex, in 1833. Byng was the son of George Byng, son the Hon. Robert Byng, third son of George Byng, 1st Viscount Torrington, and the great-grandson of Thomas Wentworth, 1st Earl of Strafford (of the second creation). He was succeeded by his eldest son, the second Earl. He was a Whig politician and held minor office under Lord Grey, Lord Melbourne and Lord John Russell. His eldest son, the third Earl, was a Liberal politician and served under William Ewart Gladstone as Parliamentary Under-Secretary of State for Foreign Affairs and Under-Secretary of State for India. In 1874, twelve years before he succeeded his father, he was summoned to the House of Lords through a writ of acceleration in his father's junior title of Baron Strafford. On his death the titles passed to his younger brother, the fourth Earl. He was succeeded by his younger brother, the fifth Earl. He was a clergyman. His son, the sixth Earl, was a County Alderman in Middlesex and Hertfordshire. He was succeeded by his nephew, the seventh Earl. He was the second but only surviving son of the Hon. Ivo Francis Byng, fourth son of the fifth Earl. As of 2014[update] the titles are held by his eldest son, the eighth Earl, who succeeded in 1984. As a descendant of the first Viscount Torrington, Lord Strafford is also in remainder to this peerage and its subsidiary titles the barony of Byng and baronetcy of Wrotham.

Another member of the Byng family was the soldier Field Marshal Julian Byng, 1st Viscount Byng of Vimy. He was the youngest son of the second Earl of Strafford from his second marriage.

Family homes are divided up among its branches but Wrotham Park, historically in Middlesex but now Hertfordshire, and a 17th-century one-storey plus attic cottage in Vernhams Dean, Hampshire have become arguably established seats.[2] Wrotham Park was named as the 17th patriarchs in the family originally had an estate in Wrotham, Kent which they sold.[3]

The traditional burial place of the Earls of Strafford is the Byng Mausoleum at Wrotham Park.[4]