From Infogalactic: the planetary knowledge core
(Redirected from Elderberry)
Jump to: navigation, search 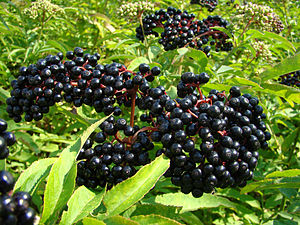 Sambucus is a genus of flowering plants in the family Adoxaceae, its species commonly called elder or elderberry. It was formerly placed in the honeysuckle family, Caprifoliaceae, but was reclassified due to genetic and morphological comparisons to Adoxa. In Sambucus, there are between 5 and 30 species of deciduous shrubs, small trees and herbaceous perennial plants.

The genus occurs in temperate to subtropical regions of the world. More widespread in the Northern Hemisphere, its Southern Hemisphere occurrence is restricted to parts of Australasia and South America. Many species are widely cultivated for their ornamental leaves, flowers and fruit.[2]

The leaves are pinnate with 5–9 leaflets (rarely 3 or 11). Each leaf is 5–30 cm (2.0–11.8 in) long, and the leaflets have serrated margins. They bear large clusters of small white or cream-colored flowers in late spring; these are followed by clusters of small black, blue-black, or red berries (rarely yellow or white).

Sambucus canadensis showing the complex branching of the inflorescence 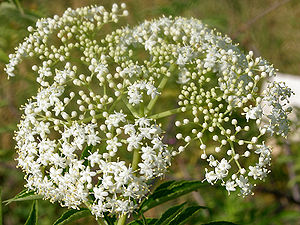 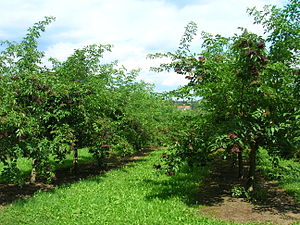 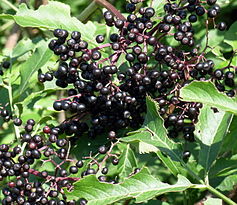 Despite the similarity in name, the Italian liqueur sambuca is mostly made with star anise and fennel essential oils extracted by vapor distillation. It also contains elderflower extracts with which it is flavored to add a floral note, to smooth and round off the strong licorice flavor.

In Germany, yoghurt desserts are made with both the berries and the flowers.[5]

Wines, cordials and marmalade have been produced from the berries or flowers. Fruit pies and relishes are produced with berries. In Italy (especially in Piedmont), Germany and Austria, the umbels of the elderberry are batter coated, fried and then served as a dessert or a sweet lunch with a sugar and cinnamon topping, known as "Hollerküchel".[citation needed]

Hollowed elderberry twigs have traditionally been used as spiles to tap maple trees for syrup.[6]

As elder trees add to the beauty of Romania's landscapes, their white flowers help its rural economy grow when they are turned into cordials exported abroad, including Britain and Australia. Every year Romanians anxiously await the blossom season in May and June to pick the delicately scented flowers and concoct a traditional soft drink called "socata".[7] The refreshing beverage has also inspired US giant Coca-Cola to launch an elderflower-based drink, Fanta Shokata; "socată" or "suc de soc" is traditionally produced by letting the flowers macerate, with water, yeast and lemon for 2–3 days. The last stage of fermentation is allowed to proceed in a closed pressure proof bottle to give a fizzy drink.

Ornamental varieties of Sambucus are grown in gardens for their showy flowers, fruits and lacy foliage.

Black elderberry has been used medicinally for hundreds of years.[8][9] Some preliminary studies demonstrate that elderberry may have a measurable effect in treating the flu, alleviating allergies, and boosting overall respiratory health.[10][11]

Elder is used in traditional Chinese medicine, dissolved in wine, for rheumatism and traumatic injury.[12]

Branches from the elder are also used to make the fujara, koncovka and other uniquely Slovakian flutes. Similar musical instruments (furulya) are made of elderberry (fekete bodza, Sambucus nigra) in Hungary and other parts of Eastern Europe.[citation needed]

The ripe, cooked berries (pulp and skin) of most species of Sambucus are edible.[13][14] However, most uncooked berries and other parts of plants from this genus are poisonous. Sambucus nigra is the only variety considered to be non-toxic, but it is still recommended that its berries be cooked slightly for culinary purposes.[13] The leaves, twigs, branches, seeds, and roots of Sambucus plants can contain a cyanide-inducing glycoside (a glycoside which gives rise to cyanide as it is metabolised). Ingesting a sufficient quantity of cyanide-inducing glycosides can cause a toxic buildup of cyanide in the body.

In 1984, a group of twenty-five people were made sick, apparently by elderberry juice pressed from fresh, uncooked Sambucus mexicana berries, leaves, and stems. However, all twenty-five recovered quickly, including one individual who was hospitalized after drinking five glasses.[15]

The berries are a very valuable food resource for many birds. In Northern California elderberries are a favorite food for migrating band-tailed pigeons. Flocks can strip an entire bush in less than an hour. Elders are used as food plants by the larvae of some Lepidoptera species including brown-tail, buff ermine, dot moth, emperor moth, engrailed moth, swallow-tailed moth and the V-pug. The crushed foliage and immature fruit have a strong fetid smell.

Valley elderberry longhorn beetles in California are very often found around red or blue elderberry bushes. Females lay their eggs on the bark. Larvae hatch and burrow into the stems.

The pith of elder has been used by watchmakers for cleaning tools before intricate work.[17]

Elder commonly grows near farms and homesteads. It is a nitrogen loving plant and thus thrives near places of organic waste disposal. Elders are often grown as a hedgerow plant in Britain since they take very fast, can be bent into shape easily and grow quite profusely, thus having gained the reputation of being 'an instant hedge'. It is not fussy about soil type or pH level and will virtually grow anywhere where it gets enough light.[18]

Folklore is extensive and can be wildly conflicting depending on region.