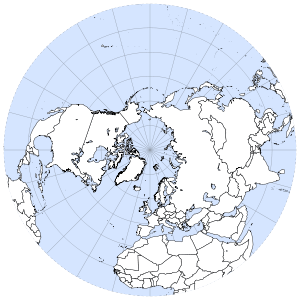 Northern Hemisphere from above the North Pole

The Northern Hemisphere of Earth is the half that is north of the equator. For other planets in the Solar System, north is defined as being in the same celestial hemisphere relative to the invariable plane of the solar system as Earth's North pole.[1]

The Arctic is the region north of the Arctic Circle. Its climate is characterized by cold winters and cool summers. Precipitation mostly comes in the form of snow. The Arctic experiences some days in summer when the Sun never sets, and some days during the winter when it never rises. The duration of these phases varies from one day for locations right on the Arctic Circle to several months near the North Pole.

Between the Arctic Circle and the Tropic of Cancer lies the Northern Temperate Zone. The changes in these regions between summer and winter are generally mild, rather than extreme hot or cold. However, a temperate climate can have very unpredictable weather.

In the Northern Hemisphere, objects moving across or above the surface of the Earth tend to turn to the right because of the coriolis effect. As a result, large-scale horizontal flows of air or water tend to form clockwise-turning gyres. These are best seen in ocean circulation patterns in the North Atlantic and North Pacific oceans.

For the same reason, flows of air down toward the northern surface of the Earth tend to spread across the surface in a clockwise pattern. Thus, clockwise air circulation is characteristic of high pressure weather cells in the Northern Hemisphere. Conversely, air rising from the northern surface of the Earth (creating a region of low pressure) tends to draw air toward it in a counterclockwise pattern. Hurricanes and tropical storms (massive low-pressure systems) spin counter-clockwise in the Northern Hemisphere.

The shadow of a sundial moves clockwise in the Northern Hemisphere (opposite of the Southern Hemisphere). During the day, the Sun tends to rise to its maximum at a southerly position.

90% of the earth's population lives in the Northern Hemisphere.[4][5]