Emmett Leo Kelly (December 9, 1898 – March 28, 1979) was an American circus performer, who created the memorable clown figure "Weary Willie", based on the hobos of the Depression era.

Kelly began his career as a trapeze artist. By 1923, Emmett Kelly was working his trapeze act with John Robinson's circus when he met and married Eva Moore, another circus trapeze artist. They later performed together as the "Aerial Kellys" with Emmett still performing occasionally as a whiteface clown.

He started working as a clown full-time in 1931, and it was only after years of attempting to persuade the management that he was able to switch from a white face clown to the hobo clown that he had sketched ten years earlier while working as a cartoonist.

"Weary Willie" was a tragic figure: a clown, who could usually be seen sweeping up the circus rings after the other performers. He tried but failed to sweep up the pool of light of a spotlight. His routine was revolutionary at the time: traditionally, clowns wore white face and performed slapstick stunts intended to make people laugh. Kelly did perform stunts too—one of his most famous acts was trying to crack a peanut with a sledgehammer—but as a tramp, he also appealed to the sympathy of his audience. 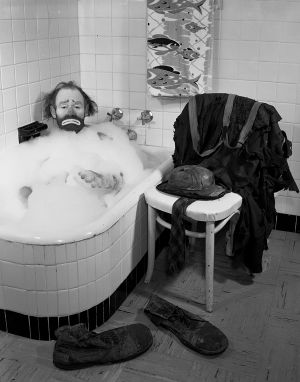 Kelly in a bubble bath, photograph by Joseph Janney Steinmetz

From 1942–1956 Kelly performed with the Ringling Brothers and Barnum and Bailey Circus, where he was a major attraction, though he took the 1956 season off to perform as the mascot for the Brooklyn Dodgers baseball team. He also landed a number of Broadway and film roles, including appearing as himself in his "Willie" persona in Cecil B. DeMille's The Greatest Show on Earth (1952). He also appeared in the Bertram Mills Circus.

Kelly was a Mystery Guest on the March 11, 1956, broadcast of What's My Line? and answered the panelists' questions with grunts rather than speaking yes or no. When the round was over, panelist Arlene Francis mentioned that Kelly was not allowed to speak while in makeup.

Kelly is depicted in a famous photograph, still in full clown make-up and costume, trying to extinguish the flames of the devastating Hartford Circus Fire that struck the Circus on July 6, 1944, and killed 167 people during the afternoon performance in Hartford, Connecticut. According to eyewitnesses, it was one of few times in which he was seen crying.[1]

Emmett Kelly died at the age of 80 of a heart attack on March 28, 1979, at his home in Sarasota, Florida. He is buried in the Rest Haven Memorial Park, in Lafayette, Indiana.[2]

Kelly's son, Emmett Kelly, Jr., did a similar "Weary Willie" character; the two were estranged for many years as a result. Kelly, Jr. claimed that his version of Willie was "less sad", but they seemed quite similar to most observers.

Kelly's boyhood town of Houston, Missouri, named Emmett Kelly Park in his honor and used to host an annual Emmett Kelly Clown Festival, which attracted clowns from across the region including Kelly's grandson, Joey Kelly, who returned every year to perform as a special guest. According to Joey Kelly's website, the Emmett Kelly Festival in Houston, Mo ended its 21-year run in May 2008.[3]

The Emmett Kelly Museum is located in Sedan, Kansas.