From Infogalactic: the planetary knowledge core
Jump to: navigation, search
This article is about the perception or emotion. For the band, see The Feeling. For other uses, see Feelings.

Feeling is the nominalization of the verb to feel.[1] The word was first used in the English language to describe the physical sensation of touch through either experience or perception. The word is also used to describe experiences other than the physical sensation of touch, such as "a feeling of warmth"[2] and of sentience in general. In Latin, sentire meant to feel, hear or smell. In psychology, the word is usually reserved for the conscious subjective experience of emotion.[3] Phenomenology and heterophenomenology are philosophical approaches that provide some basis for knowledge of feelings. Many schools of psychotherapy depend on the therapist achieving some kind of understanding of the client's feelings, for which methodologies exist. Some theories of interpersonal relationships also have a role for shared feelings or understanding of another person's feelings.[citation needed]

Perception of the physical world does not necessarily result in a universal reaction among receivers (see emotions), but varies depending on one's tendency to handle the situation, how the situation relates to the receiver's past experiences, and any number of other factors. Feelings are also known as a state of consciousness, such as that resulting from emotions, sentiments or desires.

A gut feeling, or gut reaction, is a visceral emotional reaction to something. It may be negative, such as a feeling of uneasiness, or positive, such as a feeling of trust. Gut feelings are generally regarded as not modulated by conscious thought, and as a reflection of intuition rather than rationality. The phrase "gut feeling" may also be used as a shorthand term for an individual's "common sense" perception of what is considered "the right thing to do"; such as: helping an injured passerby, avoiding dark alleys and generally acting in accordance with instinctive feelings about a given situation. It can also refer to simple common knowledge phrases which are true no matter when said, such as "Water is wet", "Fire is hot", or to ideas that an individual intuitively regards as true, without proof (see "Truthiness" for examples). 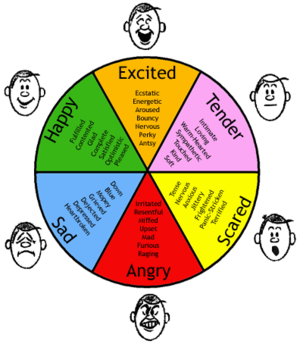