Fertility is the natural capability to produce offspring. As a measure, fertility rate is the number of offspring born per mating pair, individual or population. Fertility differs from fecundity, which is defined as the potential for reproduction (influenced by gamete production, fertilization and carrying a pregnancy to term)[citation needed]. A lack of fertility is infertility while a lack of fecundity would be called sterility.

In demographic contexts, fertility refers to the actual production of offspring, rather than the physical capability to produce which is termed fecundity.[1][2] While fertility can be measured, fecundity cannot be. Demographers measure the fertility rate in a variety of ways, which can be broadly broken into "period" measures and "cohort" measures. "Period" measures refer to a cross-section of the population in one year. "Cohort" data on the other hand, follows the same people over a period of decades. Both period and cohort measures are widely used.[3]

The "Three-step Analysis" of the fertility process was introduced by Kingsley Davis and Judith Blake in 1956 and makes use of three proximate determinants:[5][6]

Bongaarts' model of components of fertility

Bongaarts proposed a model where the total fertility rate of a population can be calculated from four proximate determinants and the total fecundity (TF). The index of marriage (Cm), the index of contraception (Cc), the index of induced abortion (Ca) and the index of postpartum infecundability (Ci). These indices range from 0 to 1. The higher the index, the higher it will make the TFR, for example a population where there are no induced abortions would have a Ca of 1, but a country where everybody used infallible contraception would have a Cc of 0.

Intercourse
The first step is sexual intercourse, and an examination of the average age at first intercourse, the average frequency outside marriage, and the average frequency inside.
Conception
Certain physical conditions may make it impossible for a woman to conceive. This is called "involuntary infecundity." If the woman has a condition making it possible, but unlikely to conceive, this is termed "subfecundity." Venereal diseases (especially gonorrhea, syphilis, and chlamydia) are common causes. Nutrition is a factor as well: women with less than 20% body fat may be subfecund, a factor of concern for athletes and people susceptible to anorexia. Demographer Ruth Frisch has argued that "It takes 50,000 calories to make a baby". There is also subfecundity in the weeks following childbirth, and this can be prolonged for a year or more through breastfeeding. A furious political debate raged in the 1980s over the ethics of baby food companies marketing infant formula in developing countries. A large industry has developed to deal with subfecundity in women and men. An equally large industry has emerged to provide contraceptive devices designed to prevent conception. Their effectiveness in use varies. On average, 85% of married couples using no contraception will have a pregnancy in one year. The rate drops to the 20% range when using withdrawal, vaginal sponges, or spermicides. (This assumes the partners never forget to use the contraceptive.) The rate drops to only 2 or 3% when using the pill or an IUD, and drops to near 0% for implants and 0% for tubal ligation (sterilization) of the woman, or a vasectomy for the man.
Gestation
After a fetus is conceived, it may or may not survive to birth. "Involuntary fetal mortality" involves natural abortion, miscarriages and stillbirth (a fetus born dead). Human intervention intentionally causing abortion of the fetus is called "therapeutic abortion".

Women have hormonal cycles which determine when they can achieve pregnancy. The cycle is approximately twenty-eight days long, with a fertile period of five days per cycle, but can deviate greatly from this norm. Men are fertile continuously, but their sperm quality is affected by their health, frequency of ejaculation, and environmental factors.

Fertility declines with age in both sexes. In women the decline is more rapid, with complete infertility normally occurring around the age of 50.

A woman's menstrual cycle begins, as it has been arbitrarily assigned, with menses. Next is the follicular phase where estrogen levels build as an ovum matures (due to the follicular stimulating hormone, or FSH) within the ovary. When estrogen levels peak, it spurs a surge of luteinizing hormone (LH) which finishes the ovum and enables it to break through the ovary wall. This is ovulation. During the luteal phase, which follows ovulation LH and FSH cause the post-ovulation ovary to develop into the corpus luteum which produces progesterone. The production of progesterone inhibits the LH and FSH hormones which (in a cycle without pregnancy) causes the corpus luteum to atrophy, and menses to begin the cycle again.

Peak fertility occurs during just a few days of the cycle: usually two days before and two days after the ovulation date.[10] This fertile window varies from woman to woman, just as the ovulation date often varies from cycle to cycle for the same woman.[11] The ovule is usually capable of being fertilized for up to 48 hours after it is released from the ovary. Sperm survive inside the uterus between 48 to 72 hours on average, with the maximum being 120 hours (5 days).

These periods and intervals are important factors for couples using the rhythm method of contraception.

Women's fertility peaks in the early 20s, and drops considerably after age 35.[15] Menopause typically occurs during a women's midlife (usually between ages 45 and 55[16][17]). During menopause, hormonal production by the ovaries is reduced, eventually causing a permanent cessation of the primary function of the ovaries, particularly the creation of the uterine lining (period). This is considered the end of the fertile phase of a woman's life.

According to a computer simulation run by Henri Leridon, PhD, an epidemiologist with the French Institute of Health and Medical Research, of women trying to get pregnant, without using fertility drugs or in vitro fertilization [18]

The use of fertility drugs and/or invitro fertilization can increase the chances of becoming pregnant at a later age.[21] Successful pregnancies facilitated by fertility treatment have been documented in women as old as 67.[22] Studies since 2004 now show that mammals may continue to produce new eggs throughout their lives, rather than being born with a finite number as previously thought. Researchers at the Massachusetts General Hospital in Boston, US, say that if eggs are newly created each month in humans as well, all current theories about the aging of the female reproductive system will have to be overhauled, although at this time this is simply conjecture.[23][24]

Evidence shows that increased male age is associated with a decline in semen volume, sperm motility, and sperm morphology.[27] In studies that controlled for female age, comparisons between men under 30 and men over 50 found relative decreases in pregnancy rates between 23% and 38%.[27] Also see

Sperm count declines with age, with men aged 50–80 years producing sperm at an average rate of 75% compared with men aged 20–50 years. However, an even larger difference is seen in how many of the seminiferous tubules in the testes contain mature sperm;

Decline in male fertility is influenced by many factors, including lifestyle, environment and psychological factors.[29]

Research shows increased risks for health problems for children of older fathers. A large scale Israeli study found that the children of men 40 or older were 5.75 times more likely than children of men under 30 to have an autism spectrum disorder, controlling for year of birth, socioeconomic status, and maternal age.[30] Increased paternal age has also been correlated to schizophrenia in numerous studies.[31][32][33]

Australian researchers have found evidence to suggest overweight obesity may cause subtle damage to sperm and prevent a healthy pregnancy. They say fertilization was 40% less likely to succeed when the father was overweight.[34]

The American Fertility Society recommends an age limit for sperm donors of 50 years or less,[35] and many fertility clinics in the United Kingdom will not accept donations from men over 40 or 45 years of age.[36] In part because of this fact, more women are now using a take-home baby rate calculator to estimate their chances of success following invitro fertilization.

The French pronatalist movement from 1919–1945 failed to convince French couples of having a patriotic duty to help increase their country's birthrate. Even the government was reluctant in its support to the movement. It was only between 1938 and 1939 that the French government became directly and permanently involved in the pronatalist effort. Although the birthrate started to surge in late 1941, the trend was not sustained. Falling birthrate once again became a major concern among demographers and government officials beginning in the 1970s.[37]

From 1800 to 1940, fertility fell in the US. There was a marked decline in fertility in the early 1900s, associated with improved contraceptives, greater access to contraceptives and sexuality information and the "first" sexual revolution. 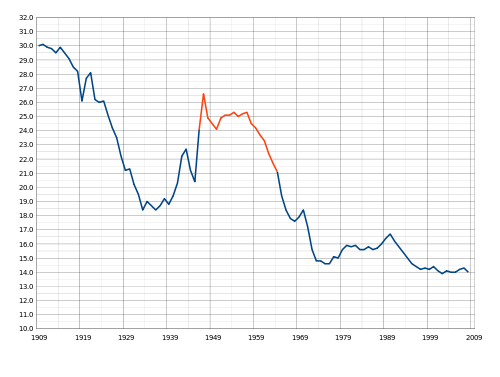 After 1940 fertility suddenly started going up again, reaching a new peak in 1957. After 1960, fertility started declining rapidly. In the Baby Boom years (1946–1964), women married earlier and had their babies sooner; the number of children born to mothers after age 35 did not increase.

American economist Richard Easterlin developed a theory (the Easterlin hypothesis) to account for the Baby Boom. He assumes first that young couples try to achieve a standard of living equal to or better than they had when they grew up. This is called "relative status"; in other words, young men in one cohort compare themselves now to where their own fathers in a previous cohort had been. Second, Easterlin assumes that when jobs are plentiful, it will be easier to marry young and have more children and still match that standard of living. But when jobs are scarce, couples who try to keep that standard of living will wait to get married and have fewer children. For Easterlin, the size of the cohort is a critical determinant of how easy it is to get a good job. A small cohort means less competition, a large cohort means more competition to worry about. The assumptions blend economics and sociology, and Easterlin did not rely on surveys or interviews asking people what really motivated them.[39]

After 1960, new methods of contraception became available, ideal family size fell, from 3 to 2 children. Couples postponed marriage and first births, and they sharply reduced the number of third and fourth births.[citation needed]

Infertility primarily refers to the biological inability of a person to contribute to conception. Infertility may also refer to the state of a woman who is unable to carry a pregnancy to full term. There are many biological causes of infertility, including some that medical intervention can treat.[40]

This article incorporates material from the Citizendium article "Fertility (demography)", which is licensed under the Creative Commons Attribution-ShareAlike 3.0 Unported License but not under the GFDL.