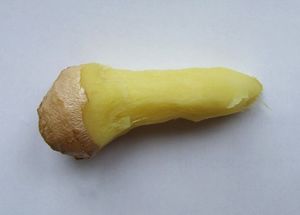 This method of physical punishment was first invented for disciplinary use on female slaves in Ancient Greece; later this practice traded over to the Roman Empire and was unofficially used as a means of disciplinary corporal punishment for female prisoners in the Victorian age.[1] The detained person subjected to this procedure was mostly restrained in an immobile position to prevent taking out the root by herself, when the uncomfortable sensation would become effectively intolerable.[2][3]

The ginger, skinned and often carved into the shape of a butt plug, causes an intense burning sensation and often intolerable discomfort to the subject. The effect builds up to the maximum within about the first two to five minutes and lasts for about half an hour before gradually easing while the essential oils are depleting. The used ginger can be skinned further or a new one can be used for continuation with an undiminished effect on the subject.[4]

If the person being figged tightens the muscles of the anus, the sensation becomes more intense.[2]