In computing, a firewall is a network security system that monitors and controls the incoming and outgoing network traffic based on predetermined security rules.[1] A firewall typically establishes a barrier between a trusted, secure internal network and another outside network, such as the Internet, that is assumed to not be secure or trusted.[2] Firewalls are often categorized as either network firewalls or host-based firewalls. Network firewalls are a software appliance running on general purpose hardware or hardware-based firewall computer appliances that filter traffic between two or more networks. Host-based firewalls provide a layer of software on one host that controls network traffic in and out of that single machine.[3][4] Firewall appliances may also offer other functionality to the internal network they protect such as acting as a DHCP or VPN server for that network.[5]

The term firewall originally referred to a wall intended to confine a fire or potential fire within a building.[6] Later uses refer to similar structures, such as the metal sheet separating the engine compartment of a vehicle or aircraft from the passenger compartment. 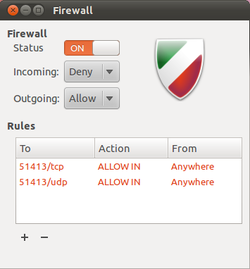 Gufw firewall. The firewall shows its settings for incoming and outgoing traffic.

The first type of firewall was the packet filter which looks at network addresses and ports of the packet and determines if that packet should be allowed or blocked.[11] The first paper published on firewall technology was in 1988, when engineers from Digital Equipment Corporation (DEC) developed filter systems known as packet filter firewalls. This fairly basic system was the first generation of what is now a highly involved and technical internet security feature. At AT&T Bell Labs, Bill Cheswick and Steve Bellovin were continuing their research in packet filtering and developed a working model for their own company based on their original first generation architecture.[12]

Packet filters act by inspecting the "packets" which are transferred between computers on the Internet. If a packet does not match the packet filter's set of filtering rules, the packet filter will drop (silently discard) the packet or reject it (discard it, and send "error responses" to the source). Conversely, if the packet matches one or more of the programmed filters, the packet is allowed to pass. This type of packet filtering pays no attention to whether a packet is part of an existing stream of traffic (i.e. it stores no information on connection "state"). Instead, it filters each packet based only on information contained in the packet itself (most commonly using a combination of the packet's source and destination address, its protocol, and, for TCP and UDP traffic, the port number). TCP and UDP protocols constitute most communication over the Internet, and because TCP and UDP traffic by convention uses well known ports for particular types of traffic, a "stateless" packet filter can distinguish between, and thus control, those types of traffic (such as web browsing, remote printing, email transmission, file transfer), unless the machines on each side of the packet filter are both using the same non-standard ports.[13]

Packet filtering firewalls work mainly on the first three layers of the OSI reference model, which means most of the work is done between the network and physical layers, with a little bit of peeking into the transport layer to figure out source and destination port numbers.[14] When a packet originates from the sender and filters through a firewall, the device checks for matches to any of the packet filtering rules that are configured in the firewall and drops or rejects the packet accordingly. When the packet passes through the firewall, it filters the packet on a protocol/port number basis (GSS). For example, if a rule in the firewall exists to block telnet access, then the firewall will block the TCP protocol for port number 23.[15]

Second-generation firewalls perform the work of their first-generation predecessors but operate up to layer 4 (transport layer) of the OSI model. This is achieved by retaining packets until enough information is available to make a judgement about its state.[17] Known as stateful packet inspection, it records all connections passing through it and determines whether a packet is the start of a new connection, a part of an existing connection, or not part of any connection.[18] Though static rules are still used, these rules can now contain connection state as one of their test criteria.

Certain denial-of-service attacks bombard the firewall with thousands of fake connection packets in an attempt to overwhelm it by filling its connection state memory.[19]

Marcus Ranum, Wei Xu, and Peter Churchyard developed an Application Firewall known as Firewall Toolkit (FWTK). In June 1994, Wei Xu extended the FWTK with the Kernel enhancement of IP filter and socket transparent. This was known as the first transparent Application firewall, released as a commercial product of Gauntlet firewall at Trusted Information Systems. Gauntlet firewall was rated one of the number one firewalls during 1995–1998.

The key benefit of application layer filtering is that it can "understand" certain applications and protocols (such as File Transfer Protocol (FTP), Domain Name System (DNS), or Hypertext Transfer Protocol (HTTP)). This is useful as it is able to detect if an unwanted protocol is attempting to bypass the firewall on an allowed port, or detect if a protocol is being abused in any harmful way. As of 2012, the so-called next-generation firewall (NGFW) is nothing more than the "widen" or "deepen" inspection at application-stack. For example, the existing deep packet inspection functionality of modern firewalls can be extended to include 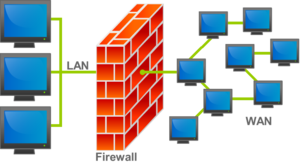 An illustration of where a firewall would be located in a network.

Network layer firewalls, also called packet filters, operate at a relatively low level of the TCP/IP protocol stack, not allowing packets to pass through the firewall unless they match the established rule set. The firewall administrator may define the rules; or default rules may apply. The term "packet filter" originated in the context of BSD operating systems.

Network layer firewalls generally fall into two sub-categories, stateful and stateless. Stateful firewalls maintain context about active sessions, and use that "state information" to speed packet processing. Any existing network connection can be described by several properties, including source and destination IP address, UDP or TCP ports, and the current stage of the connection's lifetime (including session initiation, handshaking, data transfer, or completion connection). If a packet does not match an existing connection, it will be evaluated according to the ruleset for new connections. If a packet matches an existing connection based on comparison with the firewall's state table, it will be allowed to pass without further processing.

Stateless firewalls require less memory, and can be faster for simple filters that require less time to filter than to look up a session. They may also be necessary for filtering stateless network protocols that have no concept of a session. However, they cannot make more complex decisions based on what stage communications between hosts have reached.

Application-layer firewalls work on the application level of the TCP/IP stack (i.e., all browser traffic, or all telnet or ftp traffic), and may intercept all packets traveling to or from an application. They block other packets (usually dropping them without acknowledgment to the sender).

On inspecting all packets for improper content, firewalls can restrict or prevent outright the spread of networked computer worms and trojans. The additional inspection criteria can add extra latency to the forwarding of packets to their destination.

Also, application firewalls further filter connections by examining the process ID of data packets against a ruleset for the local process involved in the data transmission. The extent of the filtering that occurs is defined by the provided ruleset. Given the variety of software that exists, application firewalls only have more complex rulesets for the standard services, such as sharing services. These per process rulesets have limited efficacy in filtering every possible association that may occur with other processes. Also, these per process rulesets cannot defend against modification of the process via exploitation, such as memory corruption exploits. Because of these limitations, application firewalls are beginning to be supplanted by a new generation of application firewalls that rely on mandatory access control (MAC), also referred to as sandboxing, to protect vulnerable services.[23]

A proxy server (running either on dedicated hardware or as software on a general-purpose machine) may act as a firewall by responding to input packets (connection requests, for example) in the manner of an application, while blocking other packets. A proxy server is a gateway from one network to another for a specific network application, in the sense that it functions as a proxy on behalf of the network user.[2]

Proxies make tampering with an internal system from the external network more difficult and misuse of one internal system would not necessarily cause a security breach exploitable from outside the firewall (as long as the application proxy remains intact and properly configured). Conversely, intruders may hijack a publicly reachable system and use it as a proxy for their own purposes; the proxy then masquerades as that system to other internal machines. While use of internal address spaces enhances security, crackers may still employ methods such as IP spoofing to attempt to pass packets to a target network.

Firewalls often have network address translation (NAT) functionality, and the hosts protected behind a firewall commonly have addresses in the "private address range", as defined in RFC 1918. Firewalls often have such functionality to hide the true address of protected hosts. Originally, the NAT function was developed to address the limited number of IPv4 routable addresses that could be used or assigned to companies or individuals as well as reduce both the amount and therefore cost of obtaining enough public addresses for every computer in an organization. Hiding the addresses of protected devices has become an increasingly important defense against network reconnaissance.[24]