From Infogalactic: the planetary knowledge core
Jump to: navigation, search
For people named Freedman, see Friedman.
Not to be confused with The Freed Man, Freeman (disambiguation), or Freed (disambiguation).

A freedman or freedwoman is a former slave who has been released from slavery, usually by legal means. Historically, slaves were freed either by manumission (granted freedom by their owner) or emancipation (granted freedom as part of a larger group). A fugitive slave is one who escaped slavery by fleeing. 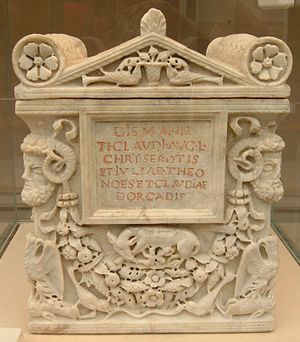 Cinerary urn for the freedman Tiberius Claudius Chryseros and two women, probably his wife and daughter

Rome differed from Greek city-states in allowing freed slaves to become citizens. The act of freeing a slave was called manumissio, from manus, "hand" (in the sense of holding or possessing something), and missio, the act of releasing. After manumission, a slave who had belonged to a Roman citizen enjoyed not only passive freedom from ownership, but active political freedom (libertas), including the right to vote.[1] A slave who had acquired libertas was known as a libertus ("freed person," feminine liberta) in relation to his former master, who was called his or her patron (patronus).

As a social class, freed slaves were liberti, though later Latin texts used the terms libertus and libertini interchangeably.[2] Libertini were not entitled to hold public office or state priesthoods, nor could they achieve legitimate senatorial rank. During the early Empire, however, freedmen held key positions in the government bureaucracy, so much so that Hadrian limited their participation by law.[3] Any future children of a freedman would be born free, with full rights of citizenship.

The Claudian Civil Service set a precedent whereby freedmen could be used as civil servants in the Roman bureaucracy. In addition, Claudius passed legislation concerning slaves, including a law stating that sick slaves abandoned by their owners became freedmen if they recovered. The emperor was criticized for using freedmen in the Imperial Courts.

Some freedmen enjoyed enormous success and became quite wealthy. The brothers who owned House of the Vettii, one of the biggest and most magnificent houses in Pompeii, are thought to have been freedmen. A freedman who became rich and influential might still be looked down on by the traditional aristocracy as a vulgar nouveau riche. Trimalchio, a character in the Satyricon of Petronius, is a caricature of such a freedman.

For centuries Arab slave traders took and transported an estimated 10 to 15 million sub-Saharan Africans to slavery in North Africa and the Middle East. They also enslaved Europeans (known as Saqaliba) from coastal areas and the Balkans. The slaves were predominately women. Many Arabs took women slaves as concubines in their harems. In the patrilineal societies, mixed-race children of concubines and Arab men were considered free and were given inheritance rights related to their fathers' property. 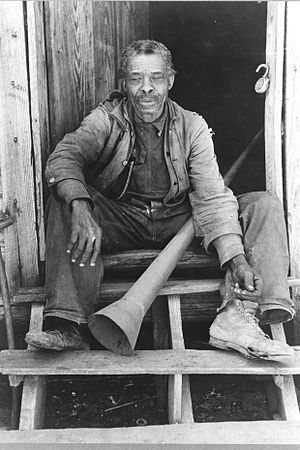 In the United States, the terms "freedmen" and "freedwomen" refer chiefly to former slaves emancipated during and after the American Civil War, by the Emancipation Proclamation and the 13th Amendment. Slaves freed before the war, usually by individual manumissions, often in wills, were generally referred to as "Free Negroes" or free blacks. In addition, there was a population of African Americans born free, descendants of families of unions between white women (indentured servants or free) and African men (whether indentured servants, slave or free.) According to laws in the slave states, children were born into the status of their mothers; thus, mixed-race children of white women were born free.[4] There were numerous such families formed in the Upper South before the Revolution, and they migrated west into Kentucky, West Virginia and Tennessee with neighbors.[4] For the first two decades after the Revolution, thousands of slaves were freed in the Upper South, and most northern states abolished slavery, some on a gradual basis.

In Louisiana and other areas of the former New France, free people of color were classified in French as : gens de couleur libres. They were born to African or African-European mothers and white fathers: of mixed-race African and French or other European ancestry. The fathers sometimes freed their children and sexual partners, and the Creoles of color community became well-established, particularly in New Orleans before Louisiana became part of the US. They had more rights under the French than later under the Americans after the Louisiana Purchase. In addition, there were sizable communities of free people of color in French Caribbean colonies, such as Saint-Domingue (now Haiti) and Guadeloupe. Due to the violence of the Haitian Revolution, many free people of color, who were originally part of the revolution, became exiles after being attacked by slave rebels, particularly in the north of the island. Some went first to Cuba, from where they came to New Orleans in 1808 and 1809 after being expelled. Many brought slaves with them. Their numbers strengthened the French-speaking community of African-descended peoples, as well as the free people of color. Other refugees from Haiti settled in New York and Charleston.

Although the Emancipation Proclamation of 1863 declared all slaves in states not under the control of the U.S. government to be free (i.e. the Confederacy), it did not end slavery as an institution. Abolition of all slavery (affecting four million people in the South, including Border States that had stayed in the Union) was achieved with the ratification of the Thirteenth Amendment to the United States Constitution. The Fourteenth Amendment gave ex-slaves full citizenship in the United States. The Fifteenth Amendment gave voting rights to adult males among the free people; as only adult males had the franchise among whites. The 13th, 14th, and 15th amendments are known as the "civil rights amendments", the "post-Civil War amendments", and the "Reconstruction Amendments".

To help freedmen transition from slavery to freedom, including a free labor market, President Abraham Lincoln created the Freedmen's Bureau, which assigned agents throughout the former Confederate states. The Bureau also founded schools to educate freedmen, both adults and children; helped freedmen negotiate labor contracts; and tried to minimize violence against freedmen. The era of Reconstruction was an attempt to establish new governments in the former Confederacy and to bring freedmen into society as voting citizens. Northern church missionary societies, such as American Missionary Association, sent teachers to the South to assist in educating freedmen and their children, and established several colleges for higher education.

The Cherokee , Choctaw and Creek nations were among those Native American tribes that held enslaved African Americans before and during the American Civil War. They supported the Confederacy during the war, supplying some warriors in the West, as they were promised their own state if the Confederacy won. After the end of the war, the U.S. required these tribes to make peace treaties, and to emancipate their slaves. They were required to offer full citizenship in their tribes to those freedmen who wanted to stay with the tribes. Numerous families had intermarried by that time or had other personal ties. If freedmen left the tribes, they would become US citizens.

In the late 20th century, the Cherokee Nation voted for restrictions on membership to only those descendants of people listed as "Cherokee by blood" on the Dawes Rolls of the early 20th century, excluding most Cherokee Freedmen (by that time a term referring to their descendants). In addition to arguing that the post-Civil War treaties gave them citizenship, the Freedmen have argued that the Dawes Rolls were often inaccurate, recording as freedmen even those persons who had partial Cherokee ancestry and were considered Cherokee by blood. The Choctaw Freedmen and Creek Freedmen have similarly struggled with their respective tribes over the terms of citizenship in contemporary times. (The tribes have wanted to limit those who can benefit from tribal citizenship, in an era in which gaming casinos are yielding considerable revenues for members.) The majority of members of the tribes have voted to limit membership, and as sovereign nations, they have the right to determine their rules. Descendants of freedmen believe their long standing as citizens since the post-Civil War treaties should be continued.