On 27 June 1988, SNCF commuter train 153944 inbound to Paris' Gare de Lyon terminal from Melun to the southeast was running its routine 50-mile journey, using one of SNCF's electric multiple units, Class Z 5300. As the train neared Paris, it passed the Le Vert de Maisons station, which was usually a stop on the route. However, SNCF had recently implemented a new summer timetable, which meant train 153944 no longer stopped at the station.

As the train pulled past the platform, a passenger in the second car of the train suddenly stood up, pulled the emergency brake, and left the train. Driver Daniel Saulin, assisted by Guard Jean Charles Bovée, after working for 26 minutes, reset the brakes and continued. This procedure had taken longer than usual, prompting many passengers to leave the train. To make up the lost time, the station controller at Gare de Lyon, André Tollance, instructed Saulin to skip the next scheduled stop (and the last before the terminal), Maisons-Alfort.

Soon after the train passed Maisons-Alfort, it reached a four-degree grade that led to Gare de Lyon. When Saulin passed a yellow signal instructing him to slow the train in preparation for being switched to an empty platform, Saulin discovered his brakes barely worked. As the train picked up speed from its descent, Saulin desperately radioed an emergency warning, but failed to identify himself to the controller. He pressed the general alarm button on his radio and left his cab to evacuate the passengers to the rear of the train.

Train 153944 crashed into a delayed outbound train as its passengers were evacuating, heeding warnings made by the delayed train's driver André Tanguy, who bravely remained in his cab repeating his warning until he was killed in the collision. 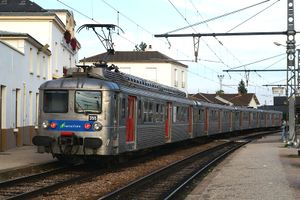 Similar train to that involved in the accident

Initial thoughts were that the collision was the result of a terrorist act, due to a recent string of bombings of French trains in and around Paris. This theory was supported by the fact that investigators who were examining the wrecked shell of train 153944 found the main brake pipe valve, located behind the first car, closed. When open, this valve allows compressed air generated in the first car to travel back through the other cars to power the compressed air brakes. When closed, the brakes on all cars behind the valve are disabled. Despite the signs of possible terrorism, the investigators believed that only someone with detailed knowledge of the braking system's workings could have closed the valve.

Next, whoever pulled the emergency brake was scrutinized, though the person was unknown. When a newspaper printed an advertisement asking for the brake-puller to come forward, a young mother came forward. She told investigators that she normally used train 153944's stop at the Le Vert de Maisons station to pick up her children from school. However, she was unaware that the new summer timetable meant that her train would not stop at Le Vert de Maisons. So not wanting to keep her children waiting, she pulled the emergency brake and left the train. The investigators concluded that her actions were irresponsible but not suspicious. She was fined 1000F for illegal use of the emergency cord.[4][5]

The investigators then turned to an older interview with Saulin and looked at the record more closely than before. After the brake was pulled, Saulin went to the rear of the first car to pull the reset handle, but the handle was sluggish and refused to move. Having been overlooked previously, it was discovered that Saulin had placed his hand on the main brake pipe valve to get more leverage to pull the reset handle. When Saulin finally pulled the handle, the investigators surmise, he must have also accidentally closed the valve.

However, this conclusion raised another question as to how Saulin managed to get the train moving again. A fail-safe mechanism on the cars locks the brakes in the on position if the valve is closed. The only way to start the train again is to re-open the valve or manually unlock each brake pad. SNCF policy requires to call for an engineer to examine the train (who would have probably found the closed valve). However, Saulin, anxious to continue the trip, enlisted the help of Boveé to work along opposite sides of the train unlocking each brake. Saulin believed the cause of the problem to be a common condition known as an "air lock". When the emergency brake is activated, an "air lock" is the result of the compressed air filling up the brake pipes, clogging them and preventing the brakes from working. The brake pads lock as part of the fail-safe mechanism when an air lock occurs. To fix this problem, the trapped air must be bled out of the pipe to release the brakes. Nevertheless, Saulin had no idea of what he had done, and stated that the pressure gauge in his cab was marking the correct measure, which is why he thought all the braking systems were in working order. Unbeknownst to him, he had closed the main valve, isolating the front carriage from the rest of the train. Thus the gauge only showed the pressure of the first carriage's brakes.

Even with only 1/8 of the required braking power, there were still opportunities to stop or slow the train. First, there was one more station (Maisons-Alfort), before Gare de Lyon, which would have given the driver plenty of time to slow down or stop the train. However, to avoid throwing other trains at the Gare De Lyon station off schedule the controllers ordered the driver to pass through Maisons-Alfort and proceed directly to Gare de Lyon. Second, the train was equipped with an additional electric brake, but according to Saulin, drivers usually disliked the electric brake because it was unreliable and had a strong tendency to wear down the brake pads. In any case, Saulin completely forgot about it as a result of his panic.

Even at this stage, there were still two more opportunities to get the train to stop. Driver Saulin messaged a warning and activated an emergency alarm to signal that his train was in trouble, but he did neither identify himself nor his position to the controllers. The controllers knew that the runaway train was one of four trains due to arrive at the station and they messaged all of them to narrow the possibilities down. However, when Saulin pushed the emergency alarm, it forced all trains on the network to stop wherever they were and wait for instructions. Several other drivers communicated with the controller for an explanation for the stoppage. The station staff tried to divert the train to an empty track, but the men were unable to identify which train was in distress because Saulin failed to identify himself and his position, and since he had left his cab, he could not have responded to the controller's communication to find out which train was in distress. Then the controllers tried to message all four inbound trains to eliminate the three problem-free ones, but since Saulin had hit the alarm button, a stream of calls from many trains inquiring about the stoppage clogged communication links between the controllers and other trains. Because the many messages kept the controllers busy, the controllers were never able to identify the troubled train.

Finally, the signallers had also pre-programmed the tracks so that the runaway train would be diverted into Platform 1, which was empty, instead of Platform 2 where the delayed train was. Crashing into an empty platform might have wrecked the train, but with the passengers evacuated into the eighth carriage, casualties would have been avoided. But when Daniel Saulin activated the alarm, the signallers had to turn all signals to red in a process called the "General Closure procedure". However, this procedure had unintended consequences signallers could not foresee. In order to give the signallers full manual control of the system, this procedure disabled all pre-programming of tracks and allowed the runaway train to go into Platform 2 instead of Platform 1. At this point, the collision was unavoidable.

The driver, Daniel Saulin, was released after serving six months of a four-year manslaughter sentence. The guard aboard the train, who assisted the driver in disabling the brakes on the train, was also sentenced to prison on the same charge. Legal proceedings were begun against the Gare de Lyon supervisor, who failed to evacuate the station, and the passenger who activated the emergency brake, but were unsuccessful.

The accident was featured on season 2 of the National Geographic Channel documentary series Seconds From Disaster in the program Paris Train Crash (also known as Runaway Train).