The Hon. Garech Domnagh Browne, born 25 June 1939, is a member of the titled family of Oranmore and Browne in the West of Ireland and is a wealthy patron of Irish arts, notably traditional Irish music. He is often known by the Gaelic designation of his name, Garech de Brún, or alternatively Garech a Brún especially in Ireland.[citation needed] 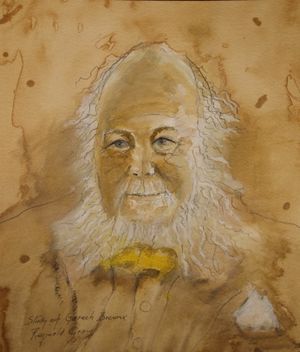 He is the eldest of the three sons of Dominick Browne, the 4th Lord Oranmore and Browne and his second wife, Oonagh Guinness, daughter of Hon. Arthur Ernest Guinness who was the second son of the first Lord Iveagh. Oonagh was therefore a wealthy heiress to the Guinness fortune and the youngest of the three "Golden Guinness Girls". His father had the rare distinction of sitting silently in the House of Lords for 72 years until his death at age 100 in August 2002, without ever having spoken in debate. As both his parents were married three times, he has had two stepmothers and two stepfathers and also has a number of elder half siblings. His only full brother, The Hon. Tara Browne was a young London socialite whose death at age 21 in a car crash in London's West End was immortalised in the song "A Day in the Life" by John Lennon. Garech was educated at Institut Le Rosey, Switzerland, and, though he is a member of the extended Guinness family, he takes no active part in its brewing business. In 2008 there was a major theft of silver and rare books from his house 'Luggala' in Co Wicklow.[1]

He has been a leading proponent for the revival and preservation of traditional Irish music, through his record label Claddagh Records which he founded with others in 1959. His former house, Woodtown Manor, near Dublin was for many years a welcoming place for Irish poets, writers and musicians and which was associated with the folk-pop group Clannad, where they made many recordings of their music. When in Ireland, he lives at Luggala set deep in the Wicklow Mountains. The house has been variously described as a castle or hunting lodge of large proportions which he inherited from his mother. It has a fairytale setting and is famous for its hospitality and house parties since the time of his mother's residency. He was interviewed at length for the Grace Notes traditional music programme on RTÉ lyric fm on 18 March 2010.[2]

Garech was instrumental in the formation of the traditional Irish folk group, The Chieftains. In 1962, after setting up Claddagh Records, he asked his friend, the famed uileann piper Paddy Moloney, to form a group for a one-off album. Paddy responded with the first line-up for The Chieftains, who went on to achieve international renown.[3]

He was married at Bombay in 1981 to the Princess Harshad Purna Devi of Morvi, daughter of His Highness Sri Mahendra Sinhji (of the Jadeja dynasty and the last Maharaja of Morvi) in India, where he spends part of each year. A new book 'Luggala Days' by Robert O'Byrne (Cico Books, London) a sort of scrap-book, details this period of Garech's life.