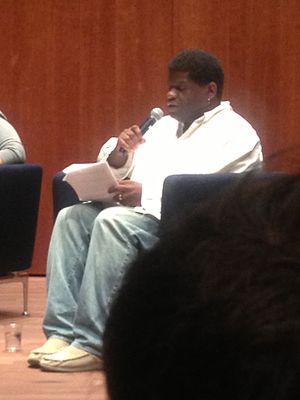 Gary Younge at Haymarket Books in 2013

Gary Younge (born 1969) is a British journalist, author and broadcaster.

In the late 1980's he attended Heriot Watt University in Edinburgh where he studied Languages [1] and was elected Vice President (Welfare) of the Student Association, a paid sabbatical post he held for a year. [2] In 2007 he was awarded an Honorary Degree by Heriot-Watt University. [3]

Younge is a feature writer and columnist for The Guardian. He writes a monthly column for The Nation, "Beneath the Radar". His book No Place Like Home, in which he retraced the route of the civil rights Freedom Riders, was shortlisted for the Guardian First Book Award in 1999.

In 2011, he moved to Chicago, where he lived with his wife Tara Mack and his son, Osceola, until his return to Britain in 2015.[4] He intends to move to Hackney.[5] His brother Pat Younge is chief creative officer of BBC Vision.[6]