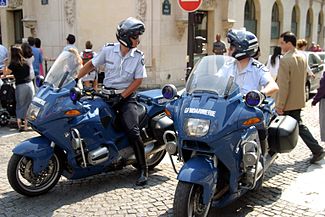 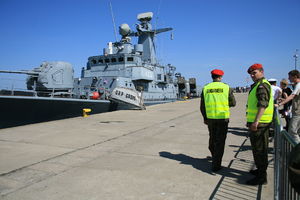 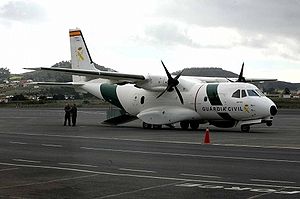 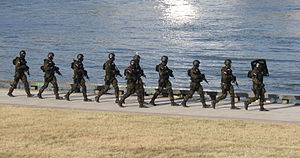 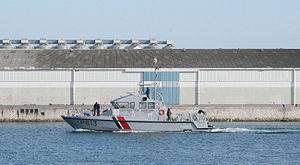 A vedette of the French Gendarmerie Maritime in La Rochelle harbour
File:Topkapı sarayında nöbetçi Jandarma Eri.jpg
A Turkish gendarme on guard at Topkapı Palace in Istanbul

A gendarmerie or gendarmery (/dʒɛnˈdɑːrməri/ or /ʒɑːnˈdɑːrməri/) is, in principle, a military[1] force charged with police duties among civilian populations. Members of such a force are typically called "gendarmes". The Shorter Oxford English Dictionary describes gendarme as "a soldier who is employed on police duties" and a "gendarmery, -erie" as "gendarmes as a body".

Modern civilian police forces may retain the title of "gendarmerie" for historical reasons.

The word gendarme comes from the Old French gens d'armes, meaning men-at-arms. During the Late Medieval to the Early Modern period, the term referred to a heavily armoured cavalryman of noble birth, primarily serving in the French army (see Gendarme (historical)). The word gained policing connotations only after the French Revolution when the Maréchaussée of the Ancien Régime was renamed the Gendarmerie.

These forces are normally titled "gendarmerie", but gendarmeries may bear other titles, for instance the Carabinieri in Italy, the Guarda Nacional Republicana in Portugal, the Guardia Civil in Spain, or Internal Troops/National Guard in Ukraine.

As a result of their duties within the civilian population, gendarmeries are sometimes described as "paramilitary" rather than "military" forces (especially in the English-speaking world where policing is rarely associated with military forces) although this description rarely corresponds to their official status and capabilities. Gendarmes are often deployed in military situations, sometimes in their own country, and often in humanitarian deployments abroad.

A few forces which are no longer considered military retain the title "gendarmerie" for reasons of tradition. For instance, the French language title of the Royal Canadian Mounted Police is Gendarmerie royale du Canada (GRC) (i.e., Royal Gendarmerie of Canada) because this force traditionally had some military-style functions (although separate from the Canadian Army) and because until the 1960s it retained an honorary status as a regiment of dragoons. The Argentine Gendarmerie is a military force in terms of training, identity and public perception, and was involved in combat in the Falklands War, however it is classified as a "security force" not an "armed force", to exercise jurisdiction over the civilian population under Argentine law.

Since different countries may make different use of institutional terms such as "gendarmerie", there are cases in which the term may become confusing. For instance, in the French-speaking Cantons of Switzerland the "gendarmeries" are the uniformed civil police (see: Gendarmerie (Switzerland)). In Chile, the word "gendarmerie" refers for historic reasons to the prison service (the "Chilean Gendarmerie"), while the actual gendarmerie force is called the "carabineros".

In some cases, a police service's military links are ambiguous and it can be unclear whether a force should be defined as a gendarmerie or not (e.g. Mexico's Federal Police, Brazil's Military Police, or the former South African Police until 1994). Services such as the Italian Guardia di Finanza would rarely be defined as gendarmeries since the service is of an ambiguous military status and does not have general policing duties amongst the civilian population. In Russia, the modern Internal Troops are military units with quasi-police duties but historically, different bodies within the Tsarist Special Corps of Gendarmes performed a variety of functions as an armed rural constabulary, urban riot control units, frontier guards, intelligence agents and political police. Prior to the creation of the Irish Free State in 1922, British rule was based on the Royal Irish Constabulary - a drilled and armed force located in rural "barracks" that was in all but name a gendarmerie.

In 2014 the Mexican Federal Police, a heavily-armed force which has many attributes of a gendarmerie, created a new seventh branch of service called the National Gendarmerie Division. The new force would initially number 5,000 personnel and was created with the assistance of the French gendarmerie.[2]

In comparison to civilian police forces, gendarmeries may provide a more disciplined force whose military capabilities (e.g., armored group in France with armored personnel carriers) make them more capable of dealing with armed groups and with all types of violence. On the other hand, the necessity of a more stringent selection process for military service, especially in terms of physical prowess and health, restricts the pool of potential recruits in comparison to those a civilian police force could select from. They also provide a state with flexibility in policing, as the military regulations of a gendermerie may exempt it from certain gaps in service affecting the civilian police, for example regarding the right to strike.

In countries where the gendarmerie and civilian police co-exist there may be rivalries and tensions between the forces. This was one of the reasons cited for the decision to disband the Belgian Gendarmerie, absorbing its functions into those of a new national police force. In recent years three European countries, Belgium, Greece and Austria, have replaced long-established gendarmeries with civilian police forces having no military links or functions.

In Argentina the Gendarmería Nacional Argentina (GNA, National Argentine Gendarmerie) can act as border patrol forces, defending and patrolling the land frontiers, antiterrorism, VIP escort missions, hostage situations and special military operations in war times (when the GNA is attached to the Argentine Army) with their 601st Special Operations Squadron "Alacran", which took part in the Falkland/Malvinas conflict<.[3] Also the GNA is responsible for key facilities (such as nuclear facilities) and government building protection and recovery in case of criminal or enemy activities, counter-narcotraffic operations, internal security reinforcement of other provincial and federal security forces, pacification, smuggling control, road controls on federal highways, and counter-sedition activities under martial law.[4] The GNA often take part in UN peace keeping missions.[5]

The use of military organisations to police civilian populations is common to many time periods and cultures. Although not wholly a French concept, the French gendarmerie has been the most influential model of such an organisation.

Many countries that were once under French influence have a gendarmerie. For instance, Belgium, Luxembourg and Austria had gendarmeries through Napoleonic influence, but all these gendarmeries have merged with the civil police (in, respectively, 2001, 2002 and 2005). Many former French colonies, especially in Africa, also have gendarmeries.

A common gendarmerie symbol is a flaming grenade, first used as such a symbol by the French.

Gendarmes play an important role re-establishing law and order in conflict areas, a task which is suited to their purpose, training and capabilities.[citation needed] Gendarmeries are widely used in peacekeeping operations, for instance in the former Yugoslavia[6] and in Ivory Coast,[7] sometimes via the European Gendarmerie Force.