Saint Hermagoras of Aquileia (also spelled Hermenagoras, Hermogenes, Ermacoras) (Italian: Sant'Ermagora, Slovene: sveti Mohor; fl. 3rd century – c. 305) is considered the first bishop of Aquileia, northern Italy. Christian tradition states that he was chosen by Saint Mark to serve as the leader of the nascent Christian community in Aquileia, and that he was consecrated bishop by Saint Peter. Hermagoras and his deacon Fortunatus (Slovene: sveti Fortunat) evangelized the area but were eventually arrested by Sebastius, a representative of Nero. They were tortured and beheaded. 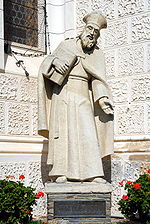 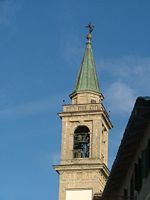 "Hermagoras" was always listed as the name of the first bishop of Aquileia. Hermagoras was probably a bishop or lector of the second half of the 3rd century or at the beginning of the fourth.[1] However, because the name or origins of the very first bishop was unknown, Aquileian traditions, arising in the 8th century, made Hermagoras a bishop of the apostolic age, who had been consecrated by Saint Peter himself.[2] As Hippolyte Delehaye writes, "To have lived among the Savoir's immediate following was...honorable...and accordingly old patrons of churches were identified with certain persons in the gospels or who were supposed to have had some part of Christ's life on earth."[1] Thus, false apostolic origins were ascribed to Hermagoras and the church at Aquileia. The tradition that Fortunatus was Hermagoras' deacon is also probably apocryphal, but a Christian named Fortunatus may have been a separate martyr at Aquileia.[3]

Hermagoras and Fortunatus may have been martyrs of Singidunum (Belgrade) who were killed there around 304 during the religious persecutions led by Emperor Diocletian.[4] Hermagoras, or Hermogenes, was a lector of Singidunum and Fortunatus was a deacon. Their relics may have been brought to Aquileia a century later, and that city became the center of their cult. It was at Aquileia that their apostolic origins were created.[4] Aquileia was one of the first cities in which the Christianity could be practised unhindered; the Patriarch of Aquileia was after the bishop of Rome the second most important person of the Western Church.[5]

Their feast day was recorded as July 12, which was further recorded in the Roman Martyrology, the Church of Aquileia, and in various other Churches. However, Venantius Fortunatus did not mention Hermagoras in his works, but mentioned the name of Fortunatus twice: once in a life of Saint Martin: Ac Fortunati benedictam urnam, and the second time in his Miscellanea: Et Fortunatum fert Aquileiam suum.[6] The Martyrologium Hieronymianum mentions Hermagoras, but in a corrupted form: Armageri, Armagri, Armigeri. However, there is confusion, as the Martyrologium Hieronymianum also lists "sanctorum Fortunate Hermogenis" under August 22 or 23.[7] The Bollandists considered this simply a repetition of the same saints.[8] However, the cult of Saint Felix and Saint Fortunatus of Aquileia were also mentioned in calendars for August 14.[9]

Hermagoras featured on the coat-of-arms of Hermagor

Hermagoras' name survives in the Carinthian city of Hermagor, in the modern state of Austria. His cult was also popular in Udine, Gorizia and Gurk. The basilica of Aquileia today contains 12th-century frescoes, one of which depicts Hermagoras and Saint Peter.[10]

Hermagoras and Fortunatus have been particularly venerated among the Slovenes, because they were Christianised by missionaries from the Aquileia. Since 1961, St. Hermagoras and St. Fortunatus have been the secondary patrons of the Archdiocese of Ljubljana, re-established that year; previously, from 1461 until 1961, they were the main patrons of the diocese. In Slovenia, there are altogether seven parish churches and 25 branch churches dedicated to St. Hermagoras and/or St. Fortunatus. The oldest Slovene publishing house, established in 1851, is named Hermagoras Society (Mohorjeva družba). The village of Šmohor in eastern Slovenia (the Municipality of Laško) is named after St. Hermagoras.[11]