The inauguration of John Tyler as the tenth President of the United States took place in the Brown’s Indian Queen Hotel on Thursday, April 6, 1841, after Tyler had received news at his home in Williamsburg, Virginia, the day before from the chief clerk of the State Department, Fletcher Webster, that William Henry Harrison had died. Tyler had not been informed of Harrison’s health during his term as vice president. 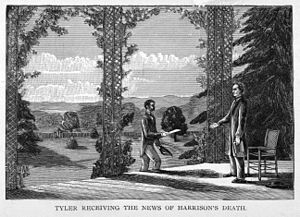 Tyler was sworn in as president by Chief Judge William Cranch of the United States Circuit Court of the District of Columbia. This was the first time in American history that the death of a president had occasioned the swearing-in of a new president.