Jain monasticism refers to the order of monks and nuns in the Jain community. The term nirgrantha "bondless" was used for Jain monks in the past. Digambaras use the word muṇi for male monastics and aryika for female monastics. Śvētāmbaras use the word sadhvis for female monastics.[1][2] Another ancient term, samaṇa "striver", is used mainly by the Sthānakavāsī. The monastic practises of two major sects Digambara and Śvētāmbara sect vary greatly but the main principles of both the sects are same. 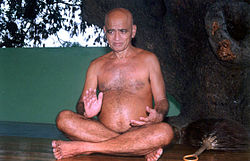 Digambara means "those whose, garment (ambara) is the element that fills the four quarters of space (dig-directions)".[3] Observing complete abstinence, Digambara monks don't wear any clothes. A Digambara monk is permitted to carry only three things: one Morpichhi and one Kamandalu (water gourd) and shastra (scripture).[4] Acharya Kundakunda is the most revered acharya of present dussama (read as Dukhma) kaal of present Avasarpani era (descending half time cycle as per Jain cosmology).[5] Every Digambara monk is required to follow the 28 vows (vrats) compulsory.

In Digambara tradition, an ascetic has to rise from the rank of Kshullak (one who uses two pieces of cloth) to Ailak (uses one piece of cloth) to that of muni (or sadhu).

All of the Digambar monastics keep Morpichhi and Kamandalu. They eat once a day from "Choka". These chokas are arranged by Śrāvakas (householders) and they invite Monks and nuns to accept the food from there. Digambar monks and ailak eat standing up and in their hands. Kshullak eat in one utensil. Nuns eat in their hand or in utensil.[11]

Śvētāmbara monks carry a woollen bed sheet and a woollen mat to sit on. They also carry a muhapati, which is a square or rectangular piece of cloth of a prescribed measurement, either in their hand or tied on their face covering the mouth. The ascetics of this sect have an Ogho or Rajoharan (a broom of woollen threads) to clean insects around their sitting place or while they are walking. 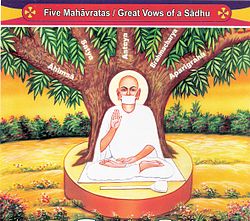 To become an ascetic, a rite is performed which is called diksha (initiation). Diksha provides a formal change in a person from the status of householder to an ascetic.

The Swetambara initiation involves the taking out of a procession where the initiate symbolically lets go of his material wealth and makes donations. This is followed or preceded by a ritual wherein the initiate receives the 'Ogho' (a woollen broom) from his/her mentor which is a symbol of welcoming them into the monastic order. Then the initiate dons the monastic attire and pulls out his/her hair by the hands. Further rituals formally initiate them into the monastic order. The svetambara terapanthi sect asks for a written permission from the parents of the person before formally initiating them to the ascetic order.[12]

Both male (monk) and female (nun) monasticism is equally considered with a few exceptions or relaxations that shall be considered merely towards worldly representation and ease of practice. Unlike, male monks female disciples follow the same restrictions wearing a white cotton sari. 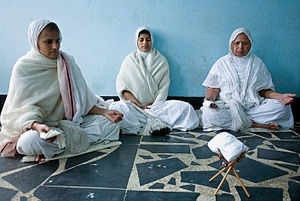 The rules of conduct of Jain ascetics are based on modifications and adaptations from older text, since they are not able to provide exact guidance. The earliest available texts often ask for ascetics to be in complete solitude, identifying the isolation of soul and non-soul. But, soon after the death of Mahavira, the ascetics organized themselves into groups.[13] Few examples of ascetics living in complete solitude are found in the digambara sect of Jainism.[14]

Jain ascetics are detached from social and worldly activities. Instead, they spend their time spiritually uplifting their souls and guiding householders on how to uplift their souls, with all their activities aimed at self-purification for self-realization. For the attainment of this objective, they follow established guidelines, perform the daily worship, and undertake austerities.[11]

Ascetics do not have a home or any possessions.[13] They choose austerity of life which is very difficult because of the many constraints placed on them; they also avoid using basic services like telephones and electricity.[15]

Jain ascetics do not cook their food, do not get it prepared for them, and do not accept any food which was prepared for them. They go to different householders that are Jains or vegetarians and receive a little food from each house. Just as cows graze the top part of grass, moving from place to place, taking a little at one place and a little at another, in the same way Jain ascetics do not take all the food from one house. They collect it from various houses.

The reason Jain ascetics accept a little food and not all the food from one house is so that householders would not have to cook again. The cooking process involves much violence in the form of fire, vegetable chopping, water consumption, etc., and ascetics do not want to be the part of any violence due to their needs. They do not receive food standing outside the house; but they go inside the house where food is cooked or kept. This way they can know that accepting food would not make the householders have to cook again. They accept food which is within the limit of their vows.[16][17]

When they travel from one place to another, whatever the distance, they always walk barefoot. They do not use any vehicle, such as a bullock cart, car, boat, ship or plane, for traveling. Whether the weather is cold or hot; whether the road is stony or thorny; whether it is the burning sand of a desert or a burning road, they do not wear any footwear at any time, moving about on bare feet all their life. The reason for not wearing shoes is so that they can avoid crushing the bugs or insects on the ground. While going places, they preach the religion (Dharma), and provide proper spiritual guidance to people.

They also do not stay more than a few days in any one place except during Chaturmas and the rainy season, which is about four months in duration. The ascetics generally do not go out at night. The place where they stay is called Upashray or Paushadh Shala, but may also stay in places that are suitable to the practice of their disciplined life and if they do not disturb or impede the code of conduct. The reason they do not stay anywhere permanently or for a longer period in one place is to avoid developing attachment for material things and the people around them.[18]

The Yati of the Svetambara sect and the Bhattaraka of the Digambar Terapanth are not wandering ascetics. They usually dwell in temples and perform daily rituals.[13]

The Jain ascetics after receiving the Diksha (initiation) do not cut their hair or shave their heads; nor do they get these things done by a barber. But twice a year or at least once a year at the time of Paryushan, they pluck off their hairs or they get the hairs plucked by others. This is called Keshlochan or Loch. This way they are not dependent on others to carry out their needs. It is also considered a form of austerity where one calmly bears the pain of plucking.[18]

The practice of dress may vary among different sects of Jains.[19] Female ascetics in general as well as Svetambara male monks always wear white clothes with little to no stitches, while Digambara Jain monks are completely nude. A loincloth which reaches up to the shins is called a Cholapattak. Another cloth to cover the upper part of the body is called Pangarani (Uttariya Vastra). A cloth that passes over the left shoulder and covers the body up to a little above the ankle is called a Kïmli, which is a woollen shawl. 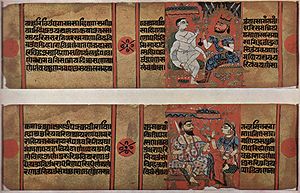 Monks of both the Svetambara and Digambara traditions are assigned to different ranks:[20]

Over a period of time, many designations were designed as mentioned in shastras like gani, pannyas and pravartak. The Terapanthi sect of the Svetambara has a new rank of junior monks, samana.[21]

Jain monks become immersed in activities such as meditation, seeking knowledge and acquiring self-discipline. Proceeding on the path of spiritual endeavor, when they reach a higher level of attainment, their spiritual elders, for the preservation of the four-fold Jain Sangh, confer upon them some special titles.[18]

The title of Acharya is considered to be very high and involves a great responsibility. The entire responsibility of the Jain Sangh rests on the shoulders of the acharya. Before attaining this title, one has to make an in-depth study and a thorough exploration of the Jain Agams and attain mastery of them. One must also study the various languages of the surrounding territory and have acquired a thorough knowledge of all the philosophies of the world related to different ideologies and religions.[22]

The title of Upadhyaya is given to a monk who teaches all the ascetics, and has acquired a specialized knowledge of the Agams (Scriptures).

The main concept of renunciation is same in both Svetambar and Digambar sects. But there are some differences in what they keep and how they take Gochari/Ahar.

The Jain text of Kalpasutra describes Mahavira's asceticism in detail, from whom most of the ascetic practices (including the gupti's and samitis) are derived:[23]

The Venerable Ascetic Mahavira for a year and a month wore clothes; after that time he walked about naked, and accepted the alms in the hollow of his hand. For more than twelve years the Venerable Ascetic Mahivira neglected his body and abandoned the care of it; he with equanimity bore, underwent, and suffered all pleasant or unpleasant occurrences arising from divine powers, men, or animals.

Chaturmas means the four months of the monsoon, during which ascetics stay in one place. Staying in one place during the monsoon reduces the risk of causing accidental death to numerous insects and smaller forms of life that thrive during the rains. During this period, it is a suitable time for lay Jains to have an annual renewal of the faith by listening to teachings of the Dharma and through meditation and vartas (self-control).[24]