Joe "Curly Joe" DeRita (July 12, 1909 – July 3, 1993), born Joseph Wardell, was an American actor and comedian who is best known for his stint as the sixth member of the Three Stooges, and the second to be billed as Curly, under the persona of "Curly Joe".

DeRita was born into a show-business family in Philadelphia, Pennsylvania, the son of Florenz (DeRita) and Frank Wardell, and of French-Canadian and English ancestry.[2] He was the youngest of his 5 brothers. Wardell's father was a stage technician, his mother a professional stage dancer, and the three often acted on stage together from his early childhood. Taking his mother's maiden name, DeRita, the actor joined the burlesque circuit during the 1920s, gaining fame as a comedian. During World War II, DeRita joined the USO, performing through Britain and France with such celebrities as Bing Crosby and Randolph Scott.

Career with the Three Stooges

The Three Stooges (Curly Howard, Larry Fine, and Moe Howard) had been making short comedies for Columbia Pictures since 1934. Curly suffered a stroke on May 6, 1946, forcing him to retire. He died on January 18, 1952 at the age of 48. His brother Shemp Howard, the original third Stooge before leaving the act in 1932 for a solo career, only wanted to be a temporary replacement. Joe DeRita was also starring in his own series at Columbia (in such entries as The Good Bad Egg, Wedlock Deadlock, Slappily Married, and Jitter Bughouse). Stooges producer-director Jules White attempted to recruit Joe DeRita for the Three Stooges, because he wanted "another Curly." However, the strong-willed DeRita refused to change his act or imitate another performer, and White eventually gave up on DeRita (DeRita's own short-subject contract was not renewed after four films, the final entry being Jitter Bughouse).[3] DeRita returned to burlesque and recorded a risque LP in 1950 called Burlesque Uncensored.

When Shemp Howard died unexpectedly of a heart attack on November 22, 1955 at age 60, he was succeeded by Joe Besser. Columbia eventually shut down the short-subjects department at the end of 1957, and Besser quit the act to take care of his ailing wife. The two remaining Stooges seriously considered retirement. Then Columbia's television subsidiary, Screen Gems, syndicated the Stooges' old comedies to television, and The Three Stooges were suddenly television superstars.

Moe and Larry now had many job offers, but they were in need of a "third Stooge." Larry had seen DeRita in a Las Vegas stage engagement and told Moe that DeRita would be "perfect for the third Stooge." Howard and Fine invited DeRita to join the act, and this time he readily accepted. When he first joined the act in 1958 (shortly after appearing in a dramatic role in the Gregory Peck western, The Bravados), DeRita wore his hair in a style similar to that of former Stooge Shemp Howard and did so during initial live stage performances. However, with television's restored popularity of the Three Stooges shorts featuring Curly Howard, it was suggested that Joe shave his head in order to look more like "Curly". At first, DeRita sported a crew cut; this eventually became a fully shaven head. Because of his physical resemblance to both Curly and Joe Besser, and to avoid confusion with his predecessors, DeRita was renamed Curly Joe.

The team embarked on a new series of six theatrical Three Stooges films, including 1959's Have Rocket, Will Travel (DeRita's on-screen debut with the Stooges) and Snow White and the Three Stooges. Aimed primarily at children, these films rarely reached the same comedic heights as their shorts and often recycled routines and songs from the older films. (Moe and Larry's advanced ages - Moe was 62 and Larry 57 at the time of the first Curly Joe film - plus pressure from the PTA and other children's advocates, led to the toning-down of the trio's trademark violent slapstick.) While DeRita's physical appearance was vaguely reminiscent of the original "Curly", his characterization was milder and not as manic or surreal. Curly Joe also showed a bit more backbone, even occasionally talking back to Moe, calling him "buddy boy".

Through the 1960s, DeRita remained a member of the team, participating in animated cartoons (with live-action introductions) and a failed television pilot titled Kook's Tour. However, Larry Fine suffered a paralyzing stroke in January 1970 [he died on January 24, 1975 at the age of 72] during production of Kook's Tour, putting all new Stooges-related material on hold. Emil Sitka was named as "the middle stooge", but never got to perform with the team. Before Moe's death on May 4, 1975 at age 77, the Stooges (with Sitka succeeding the deceased Larry) had planned to film an R-rated movie called The Jet Set (later produced with the surviving members of the Ritz Brothers and released as Blazing Stewardesses).

In the 1970s, at an ailing Moe's suggestion, DeRita attempted to form a truly "new" Three Stooges. He recruited burlesque and vaudeville veterans Mousie Garner and Frank Mitchell to replace Moe and Larry for nightclub engagements, but DeRita himself was eventually forced by health issues to retire, thereby ending the group. Mitchell had worked with original Stooges organizer Ted Healy decades earlier in an abortive attempt to replace the Stooges after they had split from Healy. Mitchell had also replaced Shemp as the "third stooge" in a 1929 Broadway play.

On August 30, 1983, the Three Stooges received a star on the Hollywood Walk of Fame. Joe Besser was the only stooge to show up at the ceremony because of DeRita's illness; Stooges co-actor Emil Sitka spoke for him. Sometime after the new star award, Besser eventually fell ill which led to his death from heart failure on March 1, 1988 at age 80. DeRita was the last Stooge to join the ensemble and the last to die.

DeRita was married to a chorus girl named Bonnie Brooks in 1935. After her death in 1965, he married Jean Sullivan. Sullivan's sons from a previous relationship, Earl and Robert Benjamin, control licencing rights to many deceased celebrities, along with the Three Stooges, through C3 Entertainment.

DeRita was the only member of the Stooges who was not Jewish. 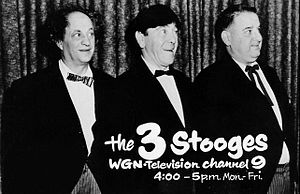 On July 3, 1993, DeRita died of pneumonia nine days before his 84th birthday at the Motion Picture & Television Country House and Hospital in Woodland Hills, California.[4] DeRita is interred in a grave at the Pierce Brothers Valhalla Memorial Park Cemetery in North Hollywood, California; his tombstone reads "The Last Stooge", as he outlived Joe Besser by 5 years (although Emil Sitka died in 1998 and Mousie Garner died in 2004, their position as "official" Stooges is debatable as they never appeared on screen in this capacity). 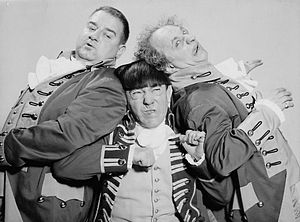 With Moe Howard and Larry Fine in 1959

Although DeRita enjoyed working with Moe and Larry and made a living doing it, he was not a fan of the Stooges' humor. He once told an interviewer the following:

Despite his indifference to the team's brand of comedy, he had nothing but respect and appreciation for the Stooges, proudly saying "Moe and Larry were the best. We worked well together and enjoyed every minute of it."[5]

In the spring of 2000, ABC aired a made-for-television movie about the Stooges, with actor Peter Callan playing the role of Joe DeRita.