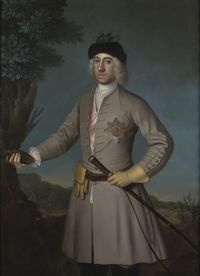 The 3rd Earl of Breadalbane.

Campbell was the son of John Campbell, 2nd Earl of Breadalbane and Holland and Henrietta Villiers. He was educated at Christ Church, Oxford.

He was Envoy to Denmark from 1718,[1] and ambassador to the Russian Empire from 1731. He was a Lord of the Admiralty in 1741 until the dissolution of Sir Robert Walpole's government the following year.

The Earl married a second time to Arbella Pershall on 23 January 1730. They also had 2 children: