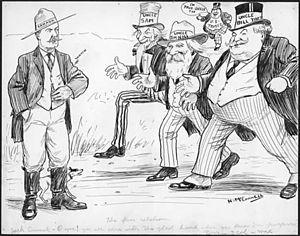 Johnny Canuck is a Canadian cartoon hero and superhero that was created as a political cartoon in 1869 and was later re-invented, most notably as a Second World War action hero in 1942. The Vancouver Canucks, a professional ice hockey team in the National Hockey League (NHL), currently use a lumberjack rendition of Johnny Canuck as one of their team logos.

Johnny Canuck is a fictional lumberjack and a national personification of Canada. He first appeared in early political cartoons dating to 1869 where he was portrayed as a younger cousin of the United States' Uncle Sam and Britain's John Bull. Dressed as a habitant, farmer, logger, rancher or soldier, he was characterized as wholesome and simple-minded and was often depicted resisting the bullying of John Bull or Uncle Sam. He appeared regularly in editorial cartoons for 30 years before declining in usage in the early twentieth century.[1]

The character re-emerged during World War II in the February 1942 issue of Bell Features' Dime Comics No.1.[1] Cartoonist Leo Bachle created the character as a teenager, apparently on a challenge from a Bell executive. Initially, Johnny Canuck had no superpowers. Johnny Canuck's cartoon exploits helped Canada fight against Nazism. Like Captain America, he met Adolf Hitler and almost single-handedly ended the war.

The use of such stock figures diminished in popularity after World War II. However, in 1975, a new comic book character, Captain Canuck, emerged. Created by Richard Comely (who at the time was unaware of the earlier Johnny Canuck character), Captain Canuck was a costumed superhero rather than just a hero, and he wore red and white tights and bore a red maple leaf emblazoned on the forehead of his mask.

Ty Templeton and Moonstone Books are currently planning to resurrect the character in a comic originally called Johnny Canuck and the Guardians of the Northern Lights and then re-titled The Northern Guard which is scheduled for release in November 2010.

In the mid-20th century, the Vancouver Canucks, a major professional ice hockey team of the Pacific Coast Hockey League and later Western Hockey League, used a lumberjack rendition of Johnny Canuck as their logo. When the Canucks moved to the National Hockey League in 1970, they discontinued the Johnny Canuck logo in favour of the "Stick-in-Rink" logo.

In 2006, a vintage-inspired goaltender mask worn by Canucks goaltender Roberto Luongo once again featured Johnny Canuck.[3] In the 2007 off-season, it was announced that the Canucks were designing a new uniform and it was speculated among fans and media that Johnny Canuck would officially return as a logo in some capacity.[3][4] Although the character was ultimately not included, the following season, in 2007–08, Luongo's new mask once again featured Johnny Canuck, but more prominently than his previous design.[5] Then, beginning in 2008–09, the Canucks reintroduced their retro Johnny Canuck WHL logo as a decal worn on their third helmets, as well as a stylized version of – Johnny Canuck's face overtop a "V" – as a shoulder patch on their third jersey.[6]