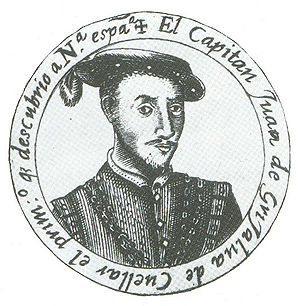 Grijalva was one of the earliest to explore the shores of Mexico. According to Hernán Cortés, 170 people went with him, but according to Pedro Mártir, there were 300 people. The main pilot was Antón de Alaminos, the other pilots were Juan Álvarez (also known as el Manquillo), Pedro Camacho de Triana, and Grijalva. Other members included Francisco de Montejo, Pedro de Alvarado, Juan Díaz, Francisco Peñalosa, Alonso de Ávila,[1]:50 Alonso Hernández, Julianillo, Melchorejo, and Antonio Villafaña. They embarked in the port of Matanzas, Cuba, with four ships in April 1518.

After rounding the Guaniguanico in Cuba, Grijalva sailed along the Mexican coast, discovered Cozumel, and arrived on 1 May at the Tabasco region in southern Mexico. The Río Grijalva in Mexico was named after him. He was also the first Spaniard to encounter Moctezuma II's delegation. One of the natives joined them, being baptized as Francisco, and became an interpreter on Cortes' expedition. Bernal Díaz del Castillo wrote about the travels of Juan de Grijalva in his book.[1]:27-43,82

Hernan Cortes stayed at Juan's home in Trinidad, Cuba, at the start of his Mexican expedition. He recruited men there, including the five Alvarado brothers.[1]:49-50