From Infogalactic: the planetary knowledge core
Jump to: navigation, search
File:Judasgoat.jpg
A Judas goat leading lambs to the slaughter

A Judas goat is a trained goat used in general animal herding. The Judas goat is trained to associate with sheep or cattle, leading them to a specific destination. In stockyards, a Judas goat will lead sheep to slaughter, while its own life is spared. Judas goats are also used to lead other animals to specific pens and onto trucks. They have fallen out of use in recent times, but can still be found in various smaller slaughterhouses in some parts of the world, as well as conservation projects.[1]

The term is a reference to the biblical character Judas Iscariot.[2] 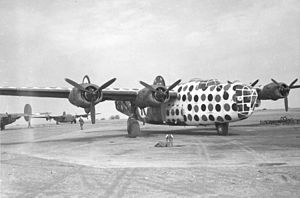 A B-24 Liberator configured as a Judas Goat

The phrase was also used in World War II by the 8th Air Force, U.S. Army Air Forces B-17 Flying Fortress and B-24 Liberator crew members. Each bomb group employed a nearly worn-out bomber known as a formation, lead, or assembly ship. These aircraft were brightly painted with group-specific high-contrast patterns in stripes, checkers, or polka dots, enabling easy recognition by their flock of bombers to form up from various airbases over England and fly strategic bombing missions over Europe.[3] After guiding their own combat bombers into the appropriate formation groups the assembly ships would return home—thus their poor condition and lack of camouflage and weapons mattered little.

The phrase has also been used to describe a goat that is used to find feral goats that are targeted for eradication. The Judas goat is usually sterilised, outfitted with a transmitter, painted in red and then released. The goat then finds the remaining herds of feral goats, allowing hunters to exterminate them.[4] The popular podcast Radiolab dedicated a portion of its episode on the Galápagos Islands to how feral goats affected the environment on the islands and how Judas goats were used to help return the islands to nature.[5]