Lucky Strike is an American brand of cigarettes owned by the British American Tobacco groups. Often referred to as "Luckies", Lucky Strike was the top-selling cigarette brand in the United States during the 1930s. Lucky Strikes now have developed a "cult" following, with many people who survived smoking Lucky Strikes in their youth continuing to seek them out.[1]

Lucky Strike brand was introduced in 1871 by the company R.A. Patterson in the USA as chewing tobacco (many sources mention Matt Tellman as the founder of Luckies, but significant information about him does not exist). The founder of Luckies was inspired by the era's rush for gold searching. Only some of the gold diggers (about four out of 1000) were fortunate enough to find gold and this was often referred to as a lucky strike. By choosing this expression as the product's name, it meant consumers who were choosing the brand were lucky, as they were choosing a top-quality blend. Lucky Strike was a brand of chewing tobacco, and by the early 1900s, it had evolved into a cigarette. 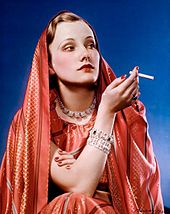 The brand was first introduced by R.A. Patterson of Richmond, Virginia, in 1871 as cut-plug chewing tobacco and later a cigarette. In 1905, the company was acquired by the American Tobacco Company (ATC). 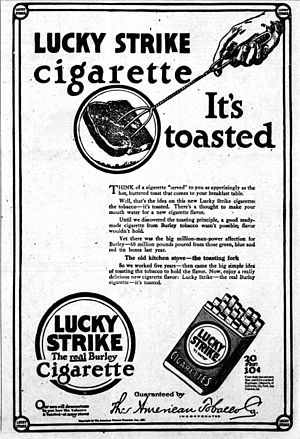 In 1917, the brand started using the slogan, "It's Toasted", to inform consumers about the manufacturing method in which the tobacco is toasted rather than sun-dried, a process touted as making the cigarettes taste delicious.

In the late 1920s, the brand was sold as a route to thinness for women. One typical ad said, "Reach for a Lucky instead of a sweet." Sales of Lucky Strikes increased by more than 300% during the first year of the advertising campaign. Sales went from 14 billion cigarettes in 1925 to 40 billion sold in 1930, making Lucky Strike the leading brand nationwide.[2]

Lucky Strike's association with radio music programs began during the 1920s on NBC. By 1928, the bandleader and vaudeville producer B. A. Rolfe was performing on radio and recording as "B.A. Rolfe and his Lucky Strike Orchestra" for Edison Records. In 1935, ATC began to sponsor Your Hit Parade, featuring North Carolina tobacco auctioneer Lee Aubrey "Speed" Riggs (later, another tobacco auctioneer from Lexington, Kentucky, F.E. Boone, was added). The weekly radio show's countdown catapulted the brand's success, remaining popular for 25 years. The shows capitalized on the tobacco auction theme and each ended with the signature phrase "Sold, American".[3]

The company's advertising campaigns generally featured a theme that stressed the quality of the tobacco purchased at auction for use in making Lucky Strike cigarettes and claimed that the higher quality tobacco resulted in a cigarette with better flavor. American engaged in a series of advertisements using Hollywood actors as endorsers of Lucky Strike, including testimonials from Douglas Fairbanks, concerning the cigarette's flavor, often described as delicious due to the tobacco being toasted.[3]

Lucky Strike was also a sponsor of comedian Jack Benny's radio and TV show, The Jack Benny Program, which was also introduced as The Lucky Strike Program. 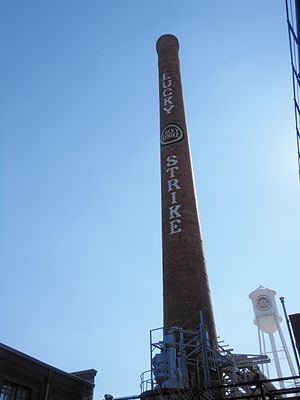 The brand's signature dark-green pack was changed to white in 1942. In a famous advertising campaign that used the slogan "Lucky Strike Green has gone to war", the company claimed the change was made because the copper used in the green color was needed for World War II.[4] American Tobacco actually used chromium to produce the green ink, and copper to produce the gold-colored trim. A limited supply of each was available, and substitute materials made the package look drab.[5]

The white package actually was introduced to modernize the label and to increase the appeal of the package among female smokers; market studies showed that the green package was not found attractive to women, who had become important consumers of tobacco products. The war effort became a convenient way to make the product more marketable while appearing patriotic at the same time.[5]

Famed industrial designer Raymond Loewy was challenged by company president George Washington Hill to improve the existing green and red package, with a $50,000 bet at stake. Loewy changed the background from green to white, making it more attractive to women, as well as cutting printing costs by eliminating the need for green dye. He also placed the Lucky Strike target logo on both sides of the package, a move that increased both visibility and sales. Hill paid off the bet.[6] 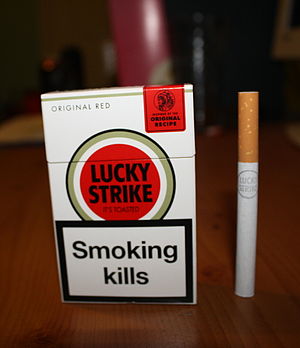 Lucky Strike was one of the brands included in the C rations provided to US combat troops during the Second World War. Each C ration of the time included, among other items, 9 cigarettes of varying brands because at the time, top military brass thought that tobacco was essential to the morale of soldiers fighting on the front lines. Other cigarette brands included in the C rations were Camel, Chesterfield, Old Gold, and Raleigh. The practice of including cigarettes in field rations continued during the Korean and Vietnam wars, ending around 1975 or 1976 with the growing knowledge that smoking caused various kinds of health problems.[7][8]

Jenson Button driving for BAR at Indianapolis in the 2005 US Grand Prix. In response to restrictions on tobacco advertising in F1 the livery does not explicitly mention Lucky Strike

In 1978 and 1994, export rights and U.S. rights were purchased by Brown & Williamson. In the 1960s, filtered styles were launched in addition to a mentholated version called "Lucky Strike Green". This time "Green" was referring to menthol and not to the overall package color. In late 2006, both the Full Flavored and Light filtered varieties of Lucky Strike cigarettes were discontinued in North America. However, Lucky Strike continued to have marketing and distribution support in territories controlled by BAT as a global drive brand. In addition, R. J. Reynolds continues to market the original, nonfilter Lucky Strikes in the United States. Lucky Strike currently has a small base of smokers.[9][10]

In 2007, a new packaging of Lucky Strikes was released, with a two-way opening which split seven cigarettes from the rest. In the same year, the company used the world's smallest man, He Pingping, in their ad campaigns.

In 2009, Lucky Strike Silver (the brand marketed as lighter) changed their UK packs from the quintessential red design to blue, albeit with a red teaser outer covering the packet.

The cigarette brand is referenced in many modern forms of media.

"Lucky Strike" was the name of one of a number of temporary U.S. Army "tent cities" known as Cigarette Camps situated around the French port of Le Havre following its capture in the wake of the Allied D-Day invasion in mid-1944.[22]