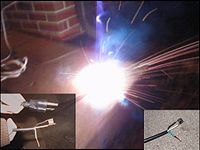 Smoke released from an electronic component 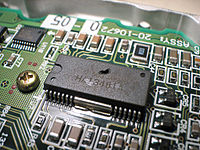 Magic smoke (also factory smoke, blue smoke, or the genie) is a humorous name for the very strong, caustic smoke produced by overheating electronic circuits or components. The smoke typically smells of burning plastic and other chemicals, and sometimes contains specks of sticky black ash. The color of the smoke depends on which component is overheating.

The name is a running in-joke that started among electrical engineers and technicians. It was more recently adopted by computer programmers. The device was operating until the smoke was released from it, at which point the device ceases to operate. Ergo: the smoke is an essential part of the device's operation, through undetermined ('magical') means.[1] The joke's humor operates via the logical consistency of what is observed, versus knowledge of what is actually occurring. This is an example of the fallacy post hoc ergo propter hoc.

This has led to phrases (and variants of) "You let the smoke out!", "The magic smoke is escaping." or "I think you set your power supply too high; there is magic smoke coming from that resistor!" as euphemisms for the destruction of a component by overheating.

When a device is powered on for the first time, it is often called a "smoke test".

The joke in the above quote is the concept of a Smokeless CPU—one in which the vital magic smoke has been released, rendering it inoperable. The joke remained in Red Hat 6.2, but was removed in a subsequent version.