From Infogalactic: the planetary knowledge core
Jump to: navigation, search
This article is about the band. For other uses, see Man O' War.

Manowar is an American heavy metal band from Auburn New York. Formed in 1980, the group is known for lyrics based on fantasy (particularly sword and sorcery) and mythology (particularly Norse mythology). The band is also known for a loud and bombastic sound. In an interview for MTV in February 2007, bassist Joey DeMaio lamented that "these days, there's a real lack of big, epic metal that is drenched with crushing guitars and choirs and orchestras... so it's nice to be one of the few bands that's actually doing that."[1] In 1984 the band was included in the Guinness Book of World Records for delivering the loudest performance, a record which they have since broken on 2 occasions. They also hold the world record for the longest heavy metal concert after playing for 5 hours and 1 minute in Bulgaria in 2008.[2][3] They also have been known for their slogan "Death to false metal".[4][5][6]

Although the band has never been a mainstream commercial success in the United States, they maintain a strong cult following there. In contrast, they are extremely popular in the heavy metal scene in Europe and South America. Dedicated fans are known and referred to by the band as "Metal Warriors", "Manowarriors", "Immortals" or "Brothers of Metal".[citation needed]. 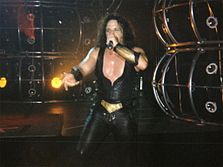 New York based Manowar's history began in 1980 when Joey DeMaio, the future bassist of the band met guitarist Ross the Boss while working as a bass tech and fireworks manager for Black Sabbath on the Heaven and Hell tour.[7] Ross the Boss, a former member of the punk rock band The Dictators, was the guitar player in Black Sabbath's support band, Shakin' Street. The two bonded over their shared musical interests, became friends and decided to form a band.

At the end of the tour with Black Sabbath, the duo got together to form Manowar.[8] To complete the roster, they hired singer Eric Adams, a former classmate and friend of DeMaio, .[9]

The newly founded band began to have some small success playing small gigs and performing cover songs in various clubs. A few months after the band's foundation, the members began to compose songs and make initial contacts with record companies, resulting in a demo recording known as Demo 1981. Worn out by the stress of continuous performances, (original drummer) Canedy left the band after the demo's release and was quickly replaced by Donnie Hamzik.[10][11]

On the strength of their debut demo, Manowar secured a recording contract with label Liberty Records in 1981. The label pressured the band to produce a good number of songs in a short time towards a debut album. The resultant album, Battle Hymns, was released the following year. The legendary actor and director Orson Welles served in the role of narrator on "Dark Avenger".[12]

Soon after the album's release, Manowar engaged in their first tour. The band played support for hard rocker Ted Nugent, but their collaboration lasted only a few months. Manowar then decided to put together a short tour by themselves and all the arrangements were made in a few weeks by their manager. Despite these setbacks, the band gained domestic fame on this short tour and also began to get their first European fans, particularly in the United Kingdom and in Germany. Stressed from the strain of the continuing performances, Hamzik decided to leave the band at the end of this tour and was replaced with Scott Columbus.

By 1983, the band left Liberty Records and struck a deal with Megaforce Records in the US and Music for Nations in Europe —signing the contract in their own blood. The signing was a cover story in the 1983 July/ August issue # 47 of Kerrang!

By the time Manowar returned home, they immediately went into a recording studio to produce what, in the intentions of the group, would have been a simple EP, but came out instead, due to the quantity and quality of the tracks made in that period, as the band's second album, Into Glory Ride. An EP was actually published in 1983 with the title Defender containing, as its main track, the eponymous song, which included more work by Orson Welles. The atmosphere of the album evoked classical heroic fantasy and mythology, and served as a predecessor to viking metal. It contained several innovative features, both in style and sound, and led to a huge increase in the number of fans of the group, particularly in the United Kingdom, where the band planned a long tour that was ultimately canceled. The song "Defender" was later re-recorded and included in the Fighting the World album of 1987.

To apologize for the failure of their UK tour, Manowar decided to dedicate their next album to the United Kingdom. The album, Hail to England, was recorded and mixed in just six days and was released in early 1984. Its promotional tour, "Spectacle of Might", had a large number of dates in England. The tour saw Manowar initially as support band for Mercyful Fate, but soon the group led by DeMaio was put in the headline slot.

Manowar soon returned to work in the recording studio. After leaving Music for Nations, the quartet released Sign of the Hammer a mere ten months after their previous album. The new record presented stark changes in rhythm, with very technical tracks characterized by a slow pace, like the epic "Mountains", and quick ones, as the eponymous "Sign of the Hammer". It's success enabled band to embark on a two-year world tour, after which they took 1986 off.

Following further disagreements with their new label, the group changed record label to Atlantic Records in 1987. Via Atlantic, they released Fighting the World, which enjoyed more extensive distribution and increased the band's prominence in the international heavy metal scene. Album art was designed by Ken Kelly, .[13][14]

In 1988, Manowar released the album Kings of Metal, which is the band's best known work. Songs like "Heart of Steel", "Kings of Metal" and "Hail and Kill" are performed regularly in concerts. Kings of Metal is Manowar's highest-selling album worldwide.

Manowar embarked on a world tour, for a period of approximately three years, with stops in almost all European nations. During that tour, Joey DeMaio "fired" Ross the Boss. According to a 2008 interview with the guitarist, "Joey felt that Manowar would be better without me."[15] He was replaced by David Shankle, who was chosen by members of the band after a search among about 150 candidates. Scott Columbus later also decided to leave the band during the Kings of Metal tour. Columbus himself picked his replacement Kenny Earl Edwards (soon nicknamed 'Rhino').

A new musical unit after the recent changes, Manowar released The Triumph of Steel in 1992. It gained some success and was particularly famous for the presence of a suite lasting no less than 28 minutes entitled "Achilles, Agony and Ecstasy in Eight Parts", inspired by the events of the Iliad and the hero Achilles. After this release, the band went on a world tour for two years. After the expiration of their contract with Atlantic, the band signed with Geffen Records. In 1994, Shankle unexpectedly left the band to form his own group. He was replaced by Karl Logan, a musician met by DeMaio during a motor meeting.[16] The same year saw the unexpected return of Scott Columbus, who replaced Edwards.

In 1996, they released Louder Than Hell, their first new studio album in four years. Despite good sales the album was criticized for its simple style.

In 2002, six years after the last studio album, Manowar released the Warriors of the World album. Warriors of the World presented a sound somewhat renewed in style, but maintained the usual energy and power. The most famous tracks from the album became "Warriors of the World United", "House of Death" and "Call to Arms", in addition to Puccini's aria "Nessun Dorma", covered in honor of the Italian fans and sung live for the first time in a concert in Milan.

Manowar then began a long world tour, called "Warriors of the World United Tour" that kept them busy and away from a recording studio for a long time. To compensate for the lack of studio albums, the band released several DVDs: in 2002 the video Fire and Blood, in 2003 Hell on Earth Part III and in 2005 Hell on Earth Part IV. These (and all DVDs since the year 2000) were directed by Neil Johnson, and have all been certified Gold in Germany.

In 2003, DeMaio founded his own record label, Magic Circle Music, which became the official home of the band, having been created to fit the needs of Manowar, and other bands of similar genre. Under the label Magic Circle were also released the EP The Sons of Odin with footage taken during the Earthshaker Fest 2005.

Manowar released Gods of War through Magic Circle Music in 2007. After playing numerous shows in Europe, including a concert that spanned the course of two nights, they worked on a new EP, entitled Thunder in the Sky, which was released in 2009. The EP consisted of two discs: the first playing the regular track list; the second playing the song "Father" in fifteen different languages.

On June 1, 2010, Classic Rock magazine published an interview[17] with drummer Scott Columbus who said he has not worked with the band since April 2008 and has in fact left the band. No official statement from Manowar has been made as yet and their website still includes Columbus on the promotional pictures and current lineup. He also said that statements made in the past, regarding his break in 1990 and 2008 because of an illness and a personal tragedy, were largely untrue and were made without his agreement. Later that year, on October 15, 2010 Joey DeMaio announced on Facebook that Hamzik was officially a member of Manowar again after a 26-year absence. Scott Columbus died less than a year later on April 4, 2011 aged 54.[18] His cause of death is still uncertain.[19]

Manowar's subsequent release was a re-recording of their 1982 debut album, Battle Hymns. This album was released on 26 November 2010, with the narration of Sir Christopher Lee and formally entitled Battle Hymns MMXI. A special edition of the album featuring 4 live tracks from the first leg of the Battle Hymns Tour was released on July 26, 2011.

On July 21, 2011 the band played a UK tour for the first time in 16 years in November and played Battle Hymns in its entirety.

Manowar's new studio album, The Lord of Steel, was released worldwide on June 16, 2012 exclusively on iTunes and on the band's own online store.[20] The album sees a reversion from the symphonic elements present on the Gods of War album back to a more straightforward, heavy metal sound. The song 'El Gringo' from the album has also been featured as a part of the soundtrack to the film El Gringo.

On the 28th July 2013, Manowar announced that they will be re-recording their 1988 release Kings Of Metal with an expected release date of late 2013. Brian Blessed will be doing the narration for the track "The Warrior's Prayer". Like the re-recording of Battle Hymns MMXI, this album will allow the band to use modern day technology.

Kings of Metal MMXIV was released through iTunes as a digital download on 4 February 2014. Hard copies of the album were released on 28 February.

Manowar started a world tour in support of their Kings of Metal MMXIV album in Chicago, US.[21]