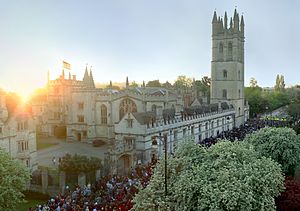 Magdalen College, Oxford, on May Morning, 2007. 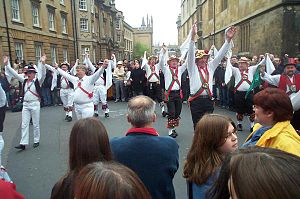 Morris dancing on May Morning, Oxford 2004.
For 1970 thriller-drama film, see May Morning (film).

May Morning is an annual event in Oxford, England, on May Day (1 May).

The event starts early at 6am with the Magdalen College Choir singing a hymn, the Hymnus Eucharisticus, from the top of Magdalen Tower, a tradition of over 500 years.[1] Large crowds normally gather under the tower along the High Street and on Magdalen Bridge. This is then followed by general revelry and festivities including Morris dancing, impromptu music, etc., for a couple of hours. There is a party atmosphere, despite the early hour. In fact, there are normally all-night balls the night before, so some people (especially students) are in formal attire (e.g., black tie/white tie or ball gown).

There is a recent tradition of students jumping from Magdalen Bridge. This seems to have started in the early 1980s.[2] The months that precede May can be relatively dry, and lead to a rather shallow river. This has resulted in some instances of serious injury (including a person left paralysed[3]), most notably those of 2005. The exceptionally low water resulted in around half the hundred or so jumpers requiring medical treatment. As a consequence, the bridge was closed on every May Morning since 2006, until its reopening in 2011.

In the 19th century, the young townsmen blew horns and ran riot, after the singing.[citation needed] Activities have varied over the previous centuries. One fictional description of the Tudor May Morning is in "Towers in the Mist" by Elizabeth Goudge.[4] Another description is found in the film Shadowlands directed by Richard Attenborough, on an episode in the life of the English scholar, writer and fellow of Magdalen's C. S. Lewis, starring Anthony Hopkins as C. S. Lewis and Debra Winger as Joy Davidman.