From Infogalactic: the planetary knowledge core
Jump to: navigation, search
This article is about the poet of Hindu bhakti movement. For other uses, see Meera (disambiguation).

Meera, also known as Mira Bai,[2] was a 16th century Hindu mystic poet and devotee of Krishna. She is celebrated as a poet and has been claimed by the North Indian Hindu tradition of Bhakti saints.[3][4]

Meera was born in a royal family of Kurki district of Pali, Rajasthan, India. She is mentioned in Bhaktamal, confirming that she was widely known and a cherished figure in the Indian bhakti movement culture by about 1600 CE.[5] Most legends about Meera mention her fearless disregard for social and family conventions, her devotion to god Krishna, her treating Krishna as her lover and husband, and she being persecuted by her in-laws for her religious devotion.[1][5] She has been the subject of numerous folk tales and hagiographic legends, which are inconsistent or widely different in details.[1][6]

Thousands of devotional poems in passionate praise of Lord Krishna are attributed to Meera in the Indian tradition, but just a few hundred are believed to be authentic by scholars, and the earliest written records suggest that except for two poems, most were written down only in the 18th century.[7] Many poems attributed to Meera were likely composed later by others who admired Meera. These poems are commonly known as bhajans, and are popular across India.[8] Hindu temples, such as in Chittorgarh fort, are dedicated to Mira Bai's memory.[1] Legends about Meera's life, of contested authenticity, have been the subject of movies, comic strips and other popular literature in modern times.[9] 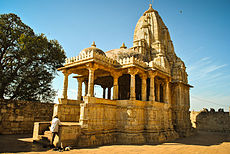 Authentic records about Meera are not available, and scholars have attempted to establish Meera's biography from secondary literature that mention her, and wherein dates and other details are available.[1] These records suggest Meera was a Rajput princess[10] born in about 1500 (likely 1498)[11] in Merta, Rajasthan in northwest India.[12]

Her father, Ratan Singh Rathore was the ruler of a small Rajput kingdom kurki, district-pali, rajasathan. her mother died when she was a baby, and she was the only child of her parents.[1] She was educated in music, religion, politics and government.[2] She grew up with her grandparents, who were devout worshippers of deity Vishnu.[13] Meera willingly married Bhoj Raj, the crown prince of Mewar, in 1516.[13][14] Her husband was wounded in one of the ongoing Hindu-Muslim wars of the Delhi Sultanate in 1518, and he died of battle wounds in 1521. Both her own father and her father-in-law were killed within a few years after her husband,[1] during a war with the Islamic army of Babur – the founder of Mughal Empire in Indian subcontinent.[12][15]

After the death of her father-in-law, Vikram Singh became the ruler of Mewar. According to a popular legend, her in-laws tried many times to execute her, such as sending Meera a glass of poison and telling her it was nectar or sending her a basket with a snake instead of flowers.[2][13] According to the hagiographic legends, she was not harmed in either case, with the snake miraculously becoming a Krishna idol (or a garland of flowers depending on the version).[6][13] In another version of these legends, she is asked by Vikram Singh to go drown herself, which she tries but she finds herself floating on water.[16] Yet another legend states that the Mughal emperor Akbar came with Tansen to visit Meera and presented a pearl necklace, but scholars doubt this ever happened because Tansen joined Akbar's court in 1562, 15 years after she died.[16]

Similarly, some stories state that Raidas was her guru (teacher), but there is no corroborating historical evidence for this and the difference of over 100 years in the birth years for Raidas and Meera suggest this to be unlikely.[16]

The three different oldest records known as of 2014 that mention Meera,[17] all from the 17th century and written within 150 years of Meera's death, neither mention anything about her childhood or circumstances of her marriage to Bhojraj, nor do they mention that the people who persecuted her were her in-laws or from some Rajput royal family.[18] Nancy Martin-Kershaw states that to the extent Meera was challenged and persecuted, religious or social conventions were unlikely to have been the cause, rather the likely cause were political chaos and military conflicts between the Rajput kingdom and the Mughal Empire.[6] Further, the diversity and inconsistencies in Meera's stories suggest that her biography was likely invented and molded by all sides, long after her death, for political goals through the medium of historical rewriting.[19]

Other stories state that Mira Bai left the kingdom of Mewar and went on pilgrimages. In her last years, Meera lived in Dwarka, Vrindavan, where legends state she miraculously disappeared by merging into an idol of Krishna in 1547.[2][1] While miracles are contested by scholars for the lack of historical evidence, it is widely acknowledged that Meera dedicated her life to Hindu deity Krishna, composing songs of devotion and was one of the most important poet-sant of the Bhakti movement period.[2][16][20] 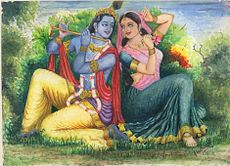 Meera poems are dedicated to Krishna (left), calling him the Dark One or the Mountain Lifter. Some Meera songs remind of Radha (right), the mythical lover of Krishna.[21]

Meera's poems are lyrical padas (metric verses).[16] While thousands of verses are attributed to her, scholars state that only a small fraction of those are authentic. There are no surviving manuscripts of her poetry from her century, and the earliest records with two poems credited to her are from early 18th-century, more than 150 years after she died.[7] The largest collection of poems credited to her are in 19th-century manuscripts. Scholars have attempted to establish authenticity based on both the poem and Meera being mentioned in other manuscripts as well as from style, linguistics and form.[7][22] John Stratton Hawley cautions, "When one speaks of the poetry of Mirabai, then, there is always an element of enigma. (...) there must always remain a question about whether there is any real relation between the poems we cite and an historical Mira."[23]

In her poems, Krishna is a yogi and lover, and she herself is a yogini ready to take her place by his side unto a spiritual marital bliss.[7] Meera's style combines impassioned mood, defiance, longing, anticipation, joy and ecstasy of union, always centered on Krishna.[22]

My Dark One has gone to an alien land.
He has left me behind, he's never returned, he's never sent me a single word.
So I've stripped off my ornaments, jewels and adornments, cut my hair from my head.
And put on holy garments, all on his account, seeking him in all four directions.
Mira: unless she meets the Dark One, her Lord, she doesn't even want to live.

Meera speaks of a personal relationship with Krishna as her lover, lord and mountain lifter. The characteristic of her poetry is complete surrender.

After making me fall for you so hard, where are you going?
Until the day I see you, no repose: my life, like a fish washed on shore, flails in agony.
For your sake I'll make myself a yogini, I'll hurl myself to death on the saw of Kashi.
Mira's Lord is the clever Mountain Lifter, and I am his, a slave to his lotus feet.

Meera is often classed with the northern Sant bhaktis who spoke of a formless divinity.[10]

Prem Ambodh Pothi, a text attributed to Guru Gobind Singh and completed in 1693 CE, includes poetry of Mira Bai as one of sixteen historic bhakti sants important to Sikhism.[26]

Scholars acknowledge that Meera was one of the central poet-sants of the Bhakti movement, during a difficult period in Indian history filled with Hindu-Muslim religious conflicts. Yet, they simultaneously question the extent to which Meera was a canonical projection of social imagination that followed, where she became a symbol of people's suffering and a desire for an alternative.[27] Dirk Wiemann, quoting Parita Mukta, states,

If one accepts that someone very akin to the Mira legend [about persecution and her devotion] existed as an actual social being, the power of her convictions broke the brutal feudal relationships that existed at that time. The Mira Bai of the popular imagination, then, is an intensely anachronistic figure by virtue of that anticipatory radical democracy which propels Meera out of the historicity that remains nonetheless ascribed to her. She goes beyond the shadowy realms of the past to inhabit the very core of a future which is embodied within the suffering of a people who seek an alternative.

The continued influence of Meera, in part, has been her message of freedom, her resolve and right to pursue her devotion to deity Krishna and her spiritual beliefs as she felt drawn to despite her persecution.[27][28] Her appeal and influence in Indian culture, writes Edwin Bryant, is from her emerging, through her legends and poems, as a person "who stands up for what is right and suffers bitterly for holding fast to her convictions, as other men and women have", yet she does so with a language of love, with words painting the "full range of emotions that mark love, whether between human beings or between human and divine".[29]

Aliston and Subramanian have published selections with English translation in India.[30][31] Schelling[32] and Landes-Levi[33] have offered anthologies in the USA. Snell[34] has presented parallel translations in his collection The Hindi Classical Tradition. Sethi has selected poems which Mira composed presumably after she came in contact with Saint Ravidas.[35] and Meera Pakeerah.

Some bhajans of Meera have been rendered into English by Robert Bly and Jane Hirshfield as Mirabai: Ecstatic Poems.[36]

Composer John Harbison adapted Bly's translations for his Mirabai Songs. There is a documentary film A Few Things I Know About Her by Anjali Panjabi.[37] Two well-known films of her life have been made in India, Meera (1945), a Tamil language film starring M. S. Subbulakshmi, and Meera a 1979 Hindi film by Gulzar. TV series, Meera (2009–2010) was also based on her life.

Meera Bai's life has been interpreted as a musical story in Meera—The Lover…, a music album based on original compositions for some well known Meera bhajans, releasing 11 October 2009.[38]